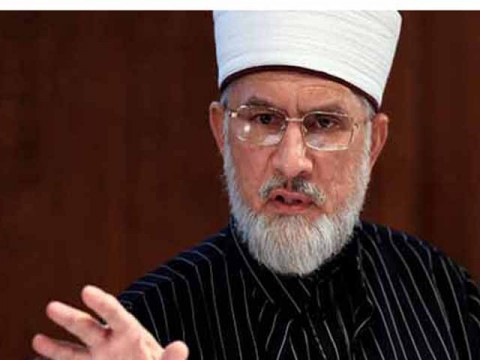 Chief of Minhajul Quran Allama Tahirul Qadri giving his seven point Charter of Demand for his Long March said his March would be for the supremacy of constitution and the law.

Addressing a news conference in Lahore on Saturday he said these seven points include electoral reforms‚ and about the caretaker government.

He said his other points of demand would be made public in front of Parliament House in Islamabad.

Qadri said that the historical march will start at 9 am Sunday.

The march will start from Data Darbar in Lahore and will end at Imam Bari in Islamabad, he added.

Qadri said that the long march will be carried out at all costs.

He said that no decision will be taken behind closed doors, adding that the long march cannot be stopped through mere dialogues. He asserted that all talks will be held outside parliament house now.

In his charter, he demanded the government to dissolve the current election commission and form an independent one.

He stressed that the interim government should be formed after consulting with all stakeholders and lastly, he said that the results of elections will not be accepted if they weren't held under article 62, 63, 68 and 218 of the constitution.

He again invited Imran Khan, chairman PTI to take part in the January 14 long march as his party is raising the slogan of change.

Dr. Qadri said a story was being broadcast on state television that cited Federal Interior Minister Rehman Malik stressing that TMI chief Dr. Qadri will surely be attacked in long march. He demanded the minister be arrested for his assertion on national TV.

There is no doubt about the integrity of Justice (retd) Fakhruddin G. Ebrahim; but, he is unable to shoulder the immense electoral responsibilities owing to his old age, he noted.

Dr Tahir warned that inactivity at this crucial juncture will only result in loss to the country. He invited all ‘patriotic political parties to stand in unison to bring the required change’.

The verdicts of Supreme Court of Pakistan are being ridiculed since the last two years”, he remarked.

He clarified that he has no greed of power; he is only holding the activity to ensure justice in Pakistan.