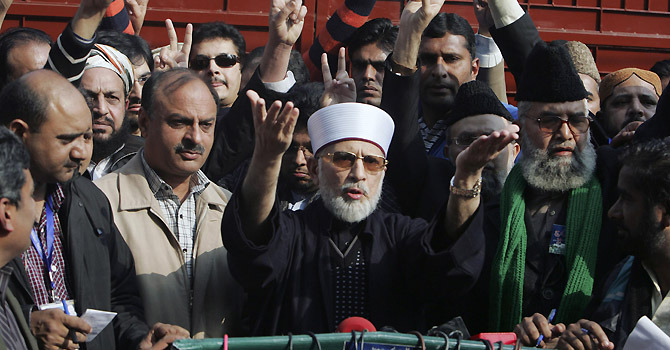 Mobiles phone services were being suspended in Rawalpindi and Islamabad in the wake of security fears.

DawnNews moreover reported that Islamabad’s deputy commissioner and local leaders of the Minhajul Quran had reached an agreement to allow Qadri and his convoy to enter the federal capital.

Earlier today, the march, after crossing Gujjar Khan, had made a stop over at Lalamusa in Kharian tehsil.

The break was taken for a short-rest and breakfast and to offer morning prayers following which the march resumed proceeding towards Islamabad.

The TMQ chief addressed participants and media persons before the resumption of the march.

Reports were received of the first batch of the march participants arriving in Islamabad.

Officials from the Punjab government gave a headcount of 13,000 people at the beginning of the march in its report sent to the federal government. Private news channels reported the number of participants as 21,000 on Monday before the resumption of the march.

DawnNews quoted a participant as saying that they were not deterred by the obstacles they had to face or by the cold weather and that their morale was high.

Earlier on Sunday, the long march departed from Lahore’s Model Town at 1.50pm, around five hours after the announced schedule. Qadri and thousands of his followers made victory signs and expressed determination to reach the D-Square in front of the Parliament House in Islamabad to achieve their objectives ‘despite all hurdles’. Police and Rangers personnel and TMQ’s own security volunteers escorted the march.

Qadri had said that despite all hurdles the participants had left their cities even on foot to join the march.