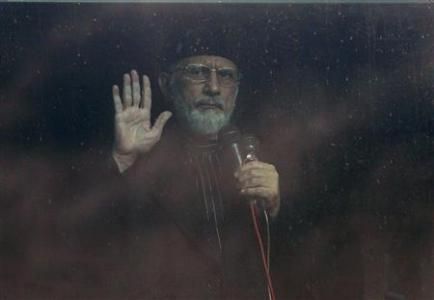 "The EU supports the right of the people of Pakistan to a democratic process that is inclusive and transparent and which will contribute to the welfare and stability of the nation. The EU welcomes the resolution of political issues in a peaceful way, and trusts that the forthcoming elections will be held in full accordance with constitutional process. The High Representative has assured her Pakistani counterparts that the EU will respond positively to an invitation to observe these elections" said, on January 19, the spokesperson of Catherine Ashton, High Representative of the Union for Foreign Affairs and Security Policy and Vice President of the Commission.

"If the government tries to deviate, we will force them to follow through the power of the people and media"Qazir Faizul Islam, secretary of information for Qadri's charity, told to Reuters. Qadri will continue to push for political reforms and will root up corruption. Pakistani government agreed to resign and perhaps today will announce the election’s day. It is said that the Pakistani cleric has strong bonds with the military. Concretely, Qadri supported a military coup in 1999. In addition, during the upheavals he praised army’s role in country’s stability. "After signing the agreement for electoral reforms, we are part of the electoral process. We might take part in elections," said Qazir Faizul Islam, secretary of information for Qadri's charity, told Reutersadding that Qadri has not political aspirations.