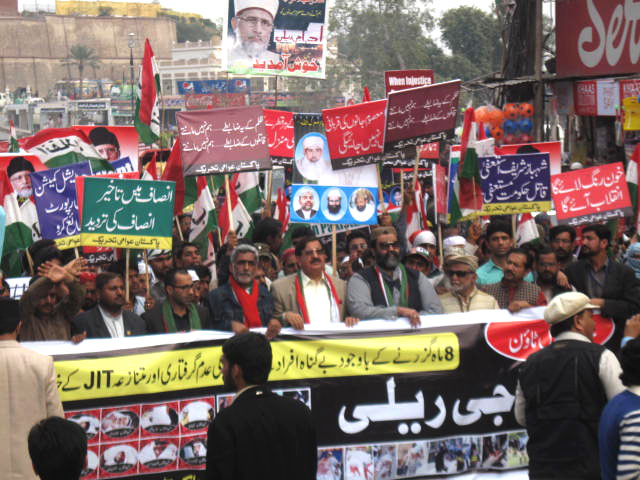 PAT chief Dr Muhammad Tahir-ul-Qadri has said that we would not rest till we make those responsible for Model Town tragedy face justice and go to gallows for their crimes. He made it clear that no tactic employed by the rulers can make distract us from the path of seeking justice. He said that the rulers are in contact with the terrorists and conspiracies have begun to be hatched to thwart the military courts. He said that after the military, it is PAT which is raising effective voice courageously in war against terrorism. He said that the present Parliament could not even declare the war on terror as our own national war through a resolution. He said that the Joint Investigation Team formed by the killers is neither acceptable now, nor it was acceptable yesterday and nor it would be in future. He said that we cannot even think of betraying the blood of 14 innocent people. He demanded that the Model Town case should be transferred to military court for trial.

Dr Tahir-ul-Qadri expressed these views while addressing the demonstration on an audio link organized by PAT Multan to protest the lack of justice in the Model Town case yesterday. The rally started from Ghanta Ghar and concluded at Nawan chowk Multan.

Dr Tahir-ul-Qadri said that the nation would have to come out for elimination of oppression and for establishment of justice in the country. He asked for how long will people stricken by lawlessness, price hike and terrorism continue to stay home and keep waiting for change. He said that Imran Khan and Dr Tahir-ul-Qadri alone cannot gift the nation with the revolution on their own, adding that the people would have to come out on roads for their rights. He said that the rulers are deceiving people in the name of war on terrorism. He said that the session of Punjab Assembly continued for one month but the issue of terrorism was not taken up for debate even for a single minute. He said that when the session was prorogued, a moth-eaten Ordinance was issue. He said that people are being led up the garden path as the rulers are telling lies to them and playing politics in the name of war on terrorism. He said that the PAT is the only political party in the country that organized countrywide protest rallies in 60 cities of the country.

Addressing the participants of the protest rally, Dr Hassan Mohi-ud-Din Qadri, President of PAT Supreme Council, said that the people of Multan have given their verdict by coming out in support of Model Town victims that they would not tolerate state terrorism at any cost. He asked the Punjab Chief Minister to tender resignation, saying that new JIT should be established with the concurrence of the affected families. He said that the report of judicial tribunal should be made public and Dr Touqeer Shah, the central character in the Model Town tragedy, should be arrested.

Addressing the rally, Khawaja Amir Farid Koreja, central Additional Secretary General of PAT, said that when Dr Tahir-ul-Qadri raised the slogan of empowering people and eliminating discrimination, inequality and oppression through his ten-point agenda, the guardians of this evil system did not have any qualm about shedding the blood of innocent people.

Mrs. Razia Naveed, central President of PAT Women Wing, said on the occasion that the women are side by side with their brothers in the struggle for revolution. She said that we cannot betray the blood of our sisters Shazia and Tanzeela who were martyred in Model Town and vowed to continue the struggle till the affected families get justice.

PTI MPA Haji Javed Ansari, Ramzan Shah Faizi of Jamat-e-Ahle-e-Sunnet, Mutee-ur-Rasool Saeedi, Saeed Ahmad Farooqi and the leaders and workers of other parties attended the protest rally in large number. The people were carrying placards and banner with anti-government slogans written on them. A large number of women and children attended the rally as well. The participants of the rally chanted slogans demanding justice in Model Town case. 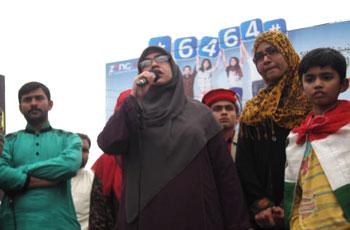 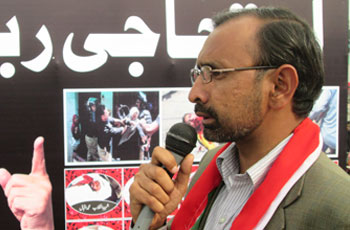 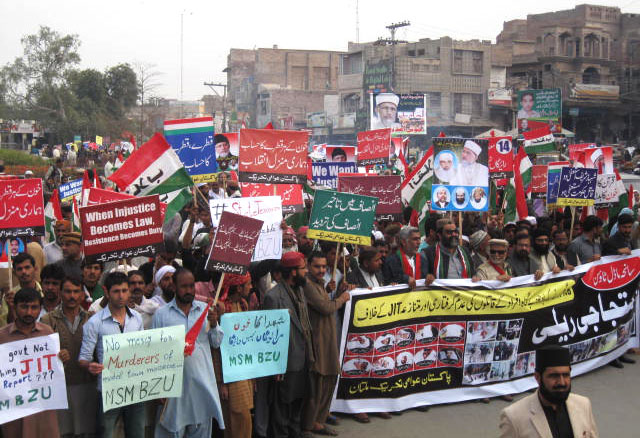 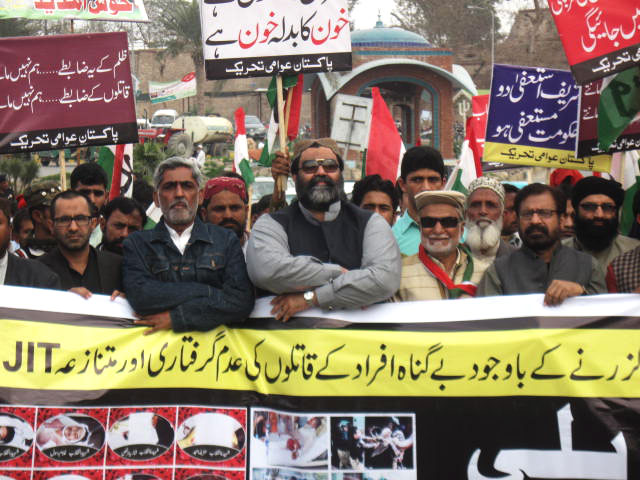 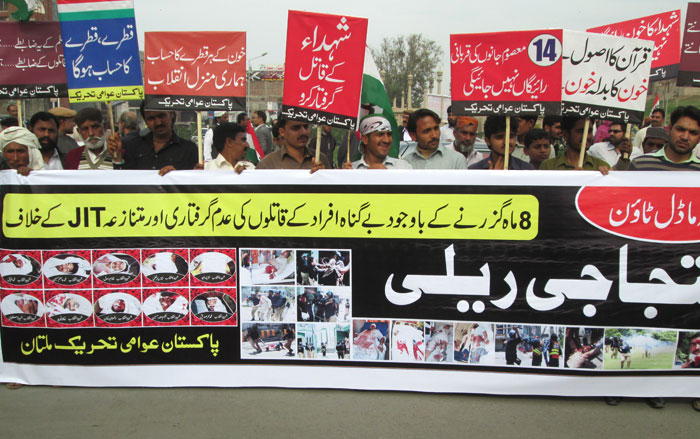 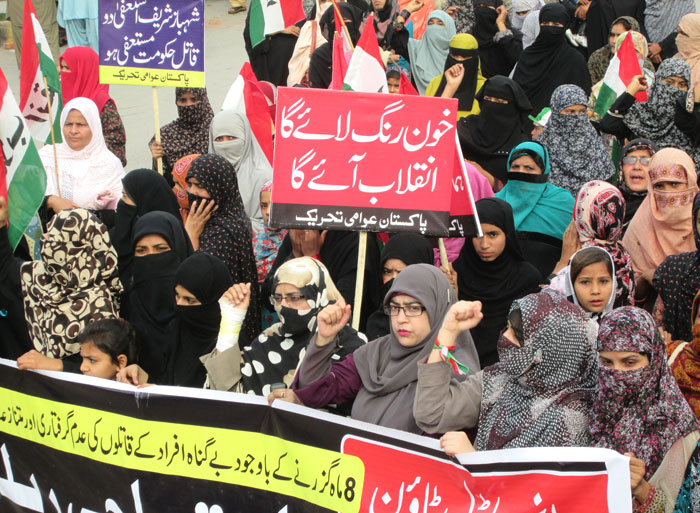 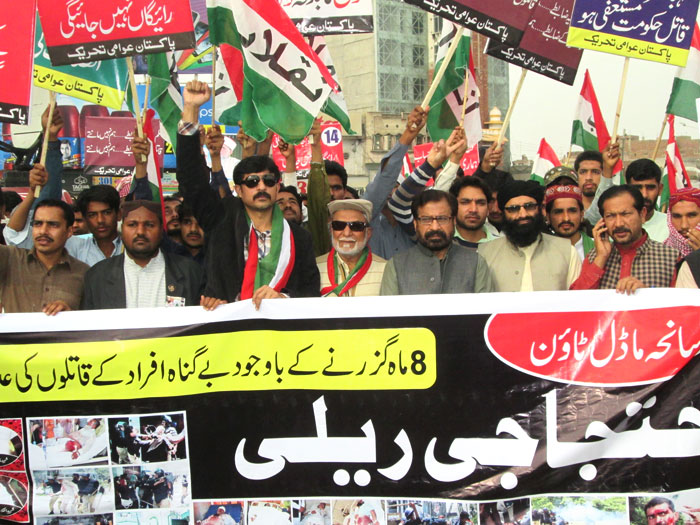