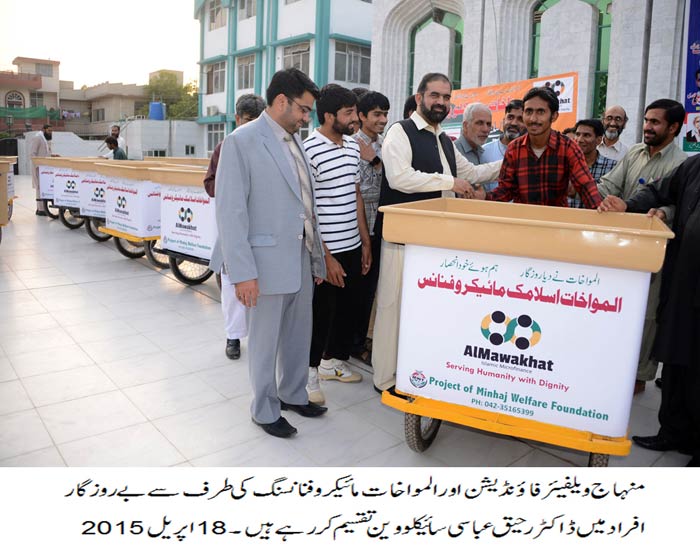 Cyclo-vans were distributed among the jobless people in a special ceremony held at the central secretariat in Lahore with collaboration between Minhaj Welfare Foundation and Al-Mawakhat Islamic Microfinance. It is pertinent to mention here that Al-Mawakhat Microfinance Project is functioning under the supervision of Dr Hussain Mohi-ud-Din Qadri, President of PAT Federal Council. PAT President Dr Raheeq Ahmad Abbasi was the chief guest at the distribution ceremony of cyclo-vans among the people.

Speaking on the occasion, Dr Raheeq Abbasi said that helping the downtrodden and underprivileged sections of society and making the poorest of the poor stand on their feet economically is what defines the politics of Dr Tahir-ul-Qadri. He said that distribution ceremony of cyclo-vans among the jobless people is link in the same chain. He said that hundreds of such vans have already been distributed among the deserving people so far.

Dr Abbasi said that another important project of Minhaj Welfare Foundation by the name of ‘Help and Food’ is also in the pipeline and will be unveiled soon. He said that under the project, food will be distributed among the poorest of the poor. Director Al-Mawakhat Project Abdul Ammar Munim, Furrakh Islam, Owais-ur-Rehman, and Hafiz Ghulam Farid also spoke at the ceremony.

Dr Abbasi said that this journey of microfinance which took off from medical stores of Sindh is being taken to KPK, Gilgit-Baltistan, AJ&K and Balochistan after its stay in Punjab. He said that institutions working in the name of microfinance in the country are increasing poverty instead of decreasing it, for their operations are marked by usury. He said that Al-Mawakhat Microfinance has launched an Islamic microfinance scheme which is free of interest and usury, adding that all people irrespective of any discrimination of caste, creed, colour and race can benefit from this project. He said that no recommendation is required for contact with the project authorities and there are no hidden charges at the same time.

Throwing light on the details of the project, Abdul Ammar Munim said that Islamic Development Bank Judah has rated Al-Mawakhat Business Model as ‘A’. He said that we at Al-Mawakhat are working on a concept far removed from charity and donation in an attempt to make the jobless people stand on their feet. He said that we are making those coming to us for help get rid of this thought that they need some charity, adding that what we are instilling among our clients is the feeling of ownership and self-confidence.

Hafiz Ghulam Farid thanked all the participants for taking time out to attend the ceremony.