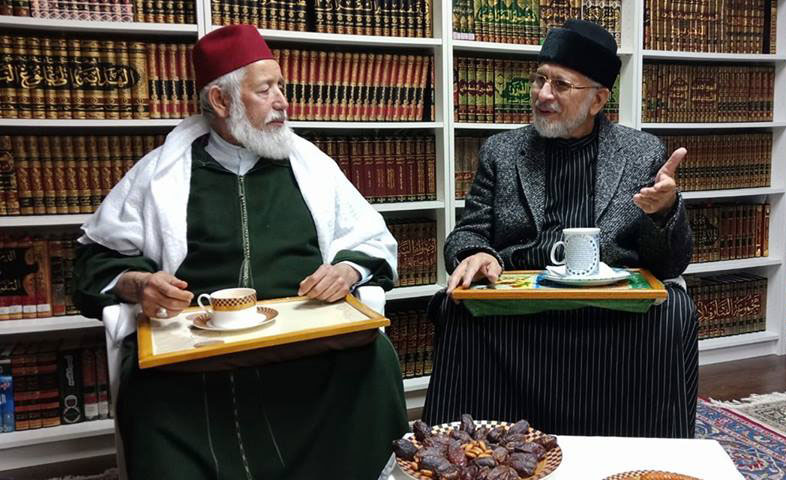 Great spiritual mentor of Morocco, Shaykh Abdullah al-Haddad, met with Shaykh-ul-Islam Dr Muhammad Tahir-ul-Qadri at his residence in Toronto. The matters related to downfall of the Muslim world including the reasons for this fall came under discussion during the meeting. Both leaders identified three things to replace the fall of the Muslims with rise and to put it on the path of progress, namely knowledge acquisition and skill development, spread of spirituality and honest and pious leadership.

Shaykh Abdullah al-Haddad said that these conditions are present in the leadership of Dr Tahir-ul-Qadri. He said that he is the only leader who has his hands on the pulse of the Muslim Umma, stating that he cannot only diagnose the ailments suffered by them but also offer a solution. He said that the Muslim world can revive its lost glory by acting upon the thought and ideology of Dr Qadri.

They also held a detailed conversation on the subject of spirituality, its meaning and concept. Benevolence (ihsan) is the third stage of the three stages of Islam. Islam seeks to put a Muslim on this path after blessing with the Islam and iman. When the members achieve the status of a benevolence through spirituality, they form a society that is based on selflessness and sacrifice. The emphasis here is not on rights but their fulfilment. Nowadays spirituality has been reduced to a mere ritual. There is a need that the spirituality is revived with its true spirit and it is only then it can be leveraged as an agent of positive change in the society.

Shaykh Abdullah al-Haddad, a renowned sufi personality of Morocco, has a special relationship of love and devotion with Shaykh-ul-Islam Dr Muhammad Tahir-ul-Qadri. He has permission from Shaykh-ul-Islam to transmit ‘asaneed’ and calls himself a disciple of Dr Qadri out of respect and devotion. He has established a spiritual centre by the name of ‘Zavia al-Salam’ in Morocco in which the arrangements have been made for imparting of education and spiritual training of the seekers of knowledge. When Shaykh-ul-Islam went there on his invitation in 2016, a large number of students, religious scholars and Shuyookh were present to welcome him. Shaykh Abdullah al-Haddad gave an introduction of personality and work of Dr Tahir-ul-Qadri and requested him to give a talk to those present. Shaykh-ul-Islam spoke on the subject of the prophethood that brought tears in the eyes of the people. When the speech ended, the people were so moved by it that they would kiss the hands of Dr Qadri or embrace him.