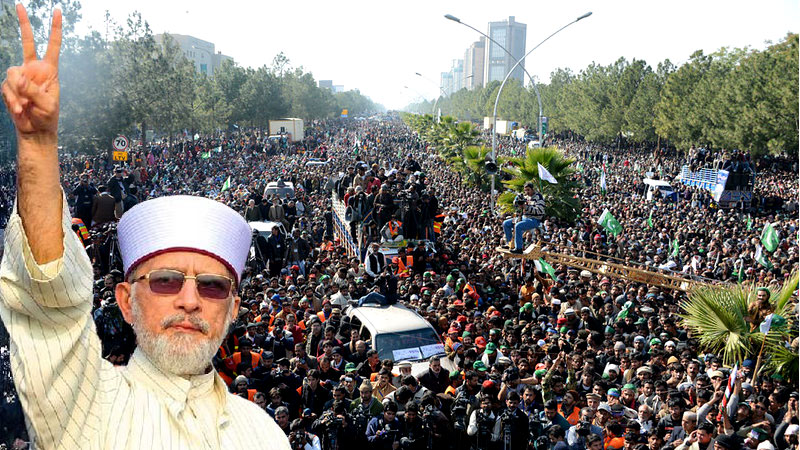 PAT Secretary General Khurram Nawaz Gandapur has said that Dr Tahir-ul-Qadri led a long march to Islamabad to highlight the need for electoral reforms on January 13, 2013. He said it was the first long march in our nation's history whose agenda was to establish real democracy in the country. He said the vision of electoral reforms propounded by Dr Tahir-ul-Qadri eight years ago is being talked about today by all and sundry. He said that hundreds of thousands of people joined Dr Qadri to express their strong disapproval of the outdated system of elections that has been prevalent in Pakistan for a long time, holding up its progress and development.

PAT Secretary General said that the forces of the status quo ganged up to suppress the public demand and did not let any reforms be adopted. He said the political parties that do not tire of trumpeting the mantra of democracy are in fact its greatest enemy. He said the political forces that are protesting alleged rigging today are the ones that supported the same system of rigging when they were in power. He said that if the government and the political parties want to see fair and transparent elections in the country, they should waste no time in adopting Dr Tahir-ul-Qadri's vision of electoral reforms.

Khurram Nawaz Gandapur said that the document signed by the then government with the PAT with regards to electoral reforms is still preserved today, asking that the same can be dusted off and implemented. He said that PAT took out the long march for the establishment of real democracy, elimination of the exploitative system, and introduction of reforms in the system of elections. He said that Dr Tahir-ul-Qadri is on record as having stated that the purpose of the long march was not to derail democracy but to put it back on track through meaningful reforms.

Khurram Nawaz Gandapur said that the masses waged a democratic and constitutional struggle to change the corrupt and oppressive system of elections on January 13, 2013. He said that PAT showed the world how a peaceful protest could be held. He said that the country's image improved in the world due to the peaceful democratic struggle and the world came to know that Pakistanis are a civilized people who know how to raise their voice for their rights in a peaceful manner. He said all and sundry were all praise for the excellent discipline and organization of PAT's long march.