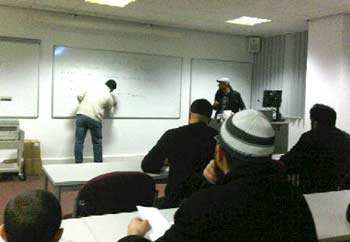 The first seminar series is titled ‘Creation of Man; An analysis of Qur’an & modern embryology’. These seminars have been designed to create mental clarity for Muslim students on the issue of creationism, and its opposing theories such as Darwin’s theory of evolution. All seminars are taught by young and upcoming scholars who are members of MYL UK.

The seminar included and expanded on the problems and enmity between Scientists and Religion.

It further went into the Qur’anic viewpoint on scientific study, and the importance of interpreting the Qur’an in light of modern scientific research.

Some evidences that prove Darwin’s theory of evolution to be a farce to the world of science were discussed and presented to the students.

The second seminar will be hosted in two weeks which will consist of a detailed analysis of the Qur’anic view on the creation of man, the evidences presented in the Qur’an 1400 years ago and the findings and research of modern embryologists spanning the last 2-300 years.