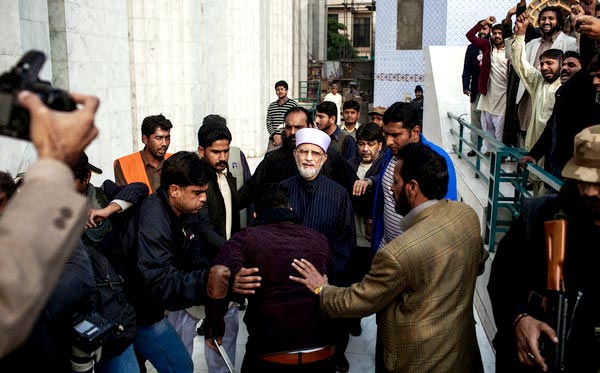 ISLAMABAD, Pakistan — Campaign season has begun in Pakistan, with elections widely expected by mid-May that, if they proceed peacefully, would represent a democratic milestone in a country plagued by intermittent military rule.

But the starting whistle has been sounded by an unlikely figure: a tough-talking preacher who is calling for a democratic “revolution,” even if he is not eligible for election himself.

Little known in Pakistan just one month ago, the preacher, Muhammad Tahir-ul Qadri, a white-bearded Sufi scholar with a taste for hard politics, has taken the country by storm in recent weeks in a campaign that has gripped the news media and jolted the traditional political mainstream.

After returning from Canada, where he has lived for seven years, Mr. Qadri made his first mark with a large rally in Lahore on Dec. 23 in which he demanded that President Asif Ali Zardari’s government resign to make way for a caretaker administration led by technocrats.

Now he is mobilizing a “million man” march that he says will reach the capital, Islamabad, on Monday, where he promises to lead a lengthy sit-in that will kick off a “moral revolution” similar to the one in Tahrir Square in Cairo that overthrew the Egyptian ruling order. “There will be no defeat,” Mr. Qadri, 61, said in a phone interview on Saturday. “This is for a spiritual and moral revolution. We will not surrender before corruption.”

That message resonates with ordinary Pakistanis weary of poor governance, dire energy shortages and sickening violence. On Saturday, ethnic Hazara Shiites in the city of Quetta blocked a road with the coffins of victims of a sectarian attack in the city on Thursday night. The death toll from the attack — the worst ever against the Hazara — has since risen to 96, according to Reuters, and the protesters said they would remove the coffins only when the army took over security in Quetta.

But Mr. Qadri’s sudden arrival on the political scene has also brought worries that he represents the interests of forces bent on derailing Pakistan’s fragile democratic order.

Questions have been raised about Mr. Qadri’s source of money — one opposition senator estimates that he has already spent $4 million on relentless television advertising — and, inevitably in a country where conspiracy theories run rife, media reports have buzzed with allegations of outside support.

Some theories focus on Western governments, particularly the United States, but most analysts point to the convergence between Mr. Qadri’s agenda and that of the powerful military, which has done little to disguise its disdain for Mr. Zardari — and even the opposition leaders who threaten to replace him.

Richard E. Hoagland, the American deputy ambassador, told reporters in Islamabad on Jan. 5 that the United States did not support any Pakistani party and denied any link to Mr. Qadri.

The planned march on Islamabad “reflects the military’s desire for regime change” and “signals that military interest in political engineering is alive and well,” said Shamila N. Chaudhary, an analyst at the Eurasia Group who formerly served as the director for Afghanistan and Pakistan on President Obama’s National Security Council.

But, Ms. Chaudhary added, the days when Pakistan’s military could seize power on a whim have passed, thanks to an aggressive news media and fiercely independent courts. “Real regime change led by Qadri is most unlikely,” she said.

Nonetheless, the government is taking him seriously. The interior minister, Rehman Malik, citing security concerns, has vowed to prevent the march from reaching the gates of Parliament in Islamabad. Security officials say a large crowd in Islamabad would provide an easy target for a suicide bombing by Islamist extremists that, in turn, could set off widespread unrest and open the door to a military intervention.

Both the military and Mr. Qadri have publicly denied working together. Others say such comments are scaremongering meant to quell a movement that taps into popular discontent.

At the very least, the situation betrays government jitters about whether it can survive until its term ends on March 17. It is expected to set elections for some time in April or May and appoint a government to take over until the vote. If a peaceful election follows, the transfer of power would represent a first in a country that has suffered three military coups over nearly six decades.

But Mr. Qadri will not be running for office — as a dual citizen of Pakistan and Canada, he is ineligible under Pakistani law.

He has been in office before, however. Before he became a citizen of Canada, he was elected to Parliament under the military leader Gen. Pervez Musharraf in 2002, only to resign two years later, disillusioned. Mr. Qadri, a lawyer and scholar, moved to the Toronto area, where he concentrated on his religious work, promoting inter-faith harmony and hosting deradicalization seminars for young Muslims in the United States, Canada and Denmark, he said. According to his Web site, his organization, Minhaj ul-Quran, is active in 90 countries. Inside Pakistan, the group runs a university in Lahore and over 600 schools and colleges, he said.

Supporters are drawn by his mix of modernism and religious conservatism. Corruption is a focus of his politics, and he insists that all election candidates should be vetted by the country’s tax authorities. He is less clear, though, about his own finances. Street traders, small businesses and ordinary Pakistanis are financing his impressive drive, Mr. Qadri said. So has his family: his wife and daughters pawned their jewelry to help out, he added.

But the preacher could not name one major campaign donor, or say how much his team had spent on television advertisements. “I don’t get involved in these things,” he said.

Heated talk of democratic upsets has come and gone before in Pakistan, and the potency of Mr. Qadri’s challenge should become apparent on Monday. Ms. Chaudhary, the analyst, predicted that he was “ultimately unlikely to shape the election results.”

For his part, Mr. Qadri has moderated his demands, stressing that his goal is simply to nudge Pakistan toward more open leadership. “I can’t say that Pakistan will become America or Canada in a couple of years,” he said. “But we want a reflection of America, to put the process on track.”

This article has been revised to reflect the following correction:

An earlier version of this article mischaracterized the change in Muhammad Tahir-ul Qadri’s religiosity when he moved to the Toronto area. He concentrated on his religious work there; he did not “embrace Islam.”