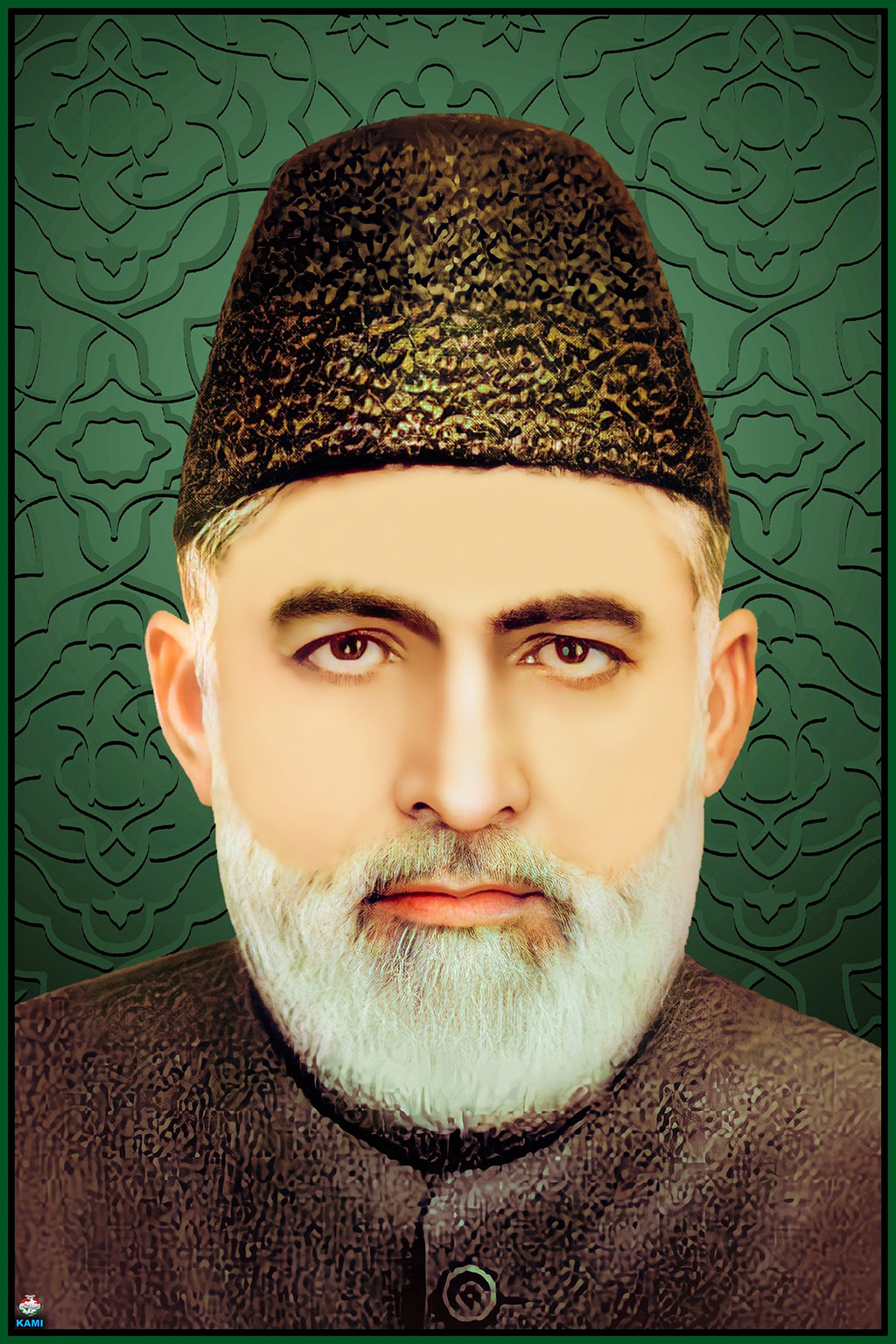 Farid-e-Millat Dr Farid-ud-Din Qadri (R.A) was born in 1918 in Jhang. His forefathers belonged to the Mahni Sial family that lived in Khiva village located on the Chiniot Road, Jhang. The name of his father was Mian Khuda Bakash. He had three sons namely Muhammad Tahir, Muhammad Javed and Muhammad Tariq. His elder son Muhammad Tahir came to be known as Shaykh-ul-Islam Dr Muhammad Tahir-ul-Qadri.

Dr Farid-ud-Din Qadri got his education up to the middle level from Islamia High School Jhang. Maulana Ghulam Farid taught him the initial books of Dars-i Nizami. He went to Sialkot after getting his initial education in Jhang where he got further education in Dars-i Nizami from Allama Muhammad Yousaf Sialkoti, who was known as Mufti-e-Azam in his area. He did his matriculation in Sialkot and went to Firangi Mahal Lucknow for higher studies where he got instruction in Dars-e-Nizami from Maulana Abdul Hayy Firangi Mahali. Overall he spent 12 years in Lucknow for the purpose of education. Continuing with his education, he took admission in Joint Tibbiya College and got a certificate of medical sciences from Shifa-ul-Mulk Hakeem Abdul Haleem Lucknawi. Moreover, during his stay in Lucknow, he got education in medicine from King George Medical College. Dr Abdul Aziz Lucknawi (MRS London), Maulana Hakeem Muhammad Hadi Raza Lucknawi, Maulana Muhammad Hussain Raza Lucknawi, and [Hakim Nabina Ansari|Hakim Abdul Wahab Nabeena Ansari] were among his teachers. 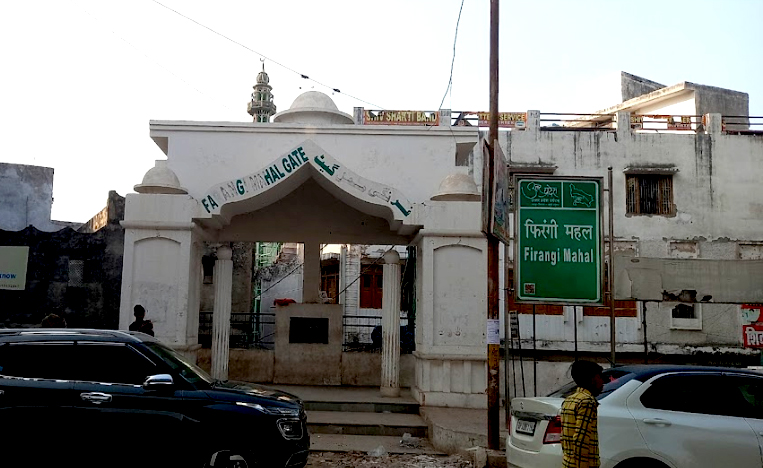 The names of the spiritual mentors, Mashaykh, and teachers from whom he got education in Ilm-ul-Hadith, Ilm-ul-Fiqh, Ilm-al-Tasawwuf, Ilm-ul-Lugha wal Adab, Ilm-un-Nahw wal Balagha and other branches of Islamic sciences:

Dr Farid-ud-Din Qadri got the Asaneed-e-Hadith and permissions from the above-mentioned Mashaykh, Imams and Mohaddithin of Two Holy Mosques with reference to the following chain of Mashaykh.

The permission to narrate Hadith extends to the following teachers and Mashaykh of Baghdad:

Hazrat Farid-e-Millat obtained the permission of these Shuyukh of Baghdad through the following Shuyukh and teachers:

Shuyukh of Lebanon and Tarabulus

Shuyukh of al-Maghrib and ash-Shanqit (Mauritania)

Hazrat Farid e Millat received the authorities of the above mentioned through:

Shuyukh of al-Hind (India and Pakistan)

Hazrat Farid e Millat received the authorities of the above mentioned through:

The journey he undertook from Jhang in connection with the learning of knowledge took him to Iran, Iraq, Turkey, Syria, and Saudi Arabia in addition to Sialkot, Lakhnow and Hyderabad Deccan. He also authored various travelogues in which he documented his experiences of journeys to Iran, Iraq, Turkey and Syria.

Appointment as a royal doctor in Saudi Arabia

During his visit to the Two Holy Mosques in the days of Hajj in 1963, Dr Farid-ud-Din Qadri happened to check a patient belonging to the royal family whom doctors thought could not be cured anymore. With his treatment, the illness of the patient was cured. In recognition of his service, Dr Farid-ud-Din Qadri was awarded a royal passport, which did not need any visa and he could come any time he wished.

In addition to being a qualified doctor, Dr Farid-ud-Din Qadri was an authentic poet who also wrote a book of poetry. He would seek guidance from Shakeel Meenai, the nephew of Ameer Minai in poetry. He would take part in poetic gatherings during his stay in Lucknow. A major portion of his poetic work was lost. Some of his verses are being shared here for the readers:

Practical role in the Pakistan Movement

Dr Farid-ud-Din Qadri took part in the historic struggle for the establishment of Pakistan under the leadership of Quaid-i-Azam Muhammad Ali Jinnah. He started working for the Pakistan Movement in his student days and would actively participate in the political activities of the student organizations. He was at the forefront of the struggle for Pakistan during his stay in Hyderabad Deccan and Lakhnow. He played an effective role in the practical efforts undertaken from the platform of the All-India Muslim Students Federation and the All-India Muslim League.

Dr Farid-ud-Din Qadri attended the historic public gathering held at Minar-e-Pakistan on March 23, 1940. He was accompanied by an old friend, Dr Ehsan Sabri Qureshi who states: "Dr Farid-ud-Din Qadri came to take me for a historic public meeting on March 23, 1940 in Lahore. We found a place in the third row in the public meeting. We would chant slogans in favour of the Muslim League and the Quaid-i-Azam. Abul Qasim Fazal-e-Haq, Khaleeq-uz-Zaman, Nawabzada Liaqat Ali Khan and the Quaid-i-Azam would applaud us."

Dr Farid-ud-Din Qadri played a key role in the practical politics of Jhang at the time of 1945 Indian general elections. He worked with Col Abid Hussain on the platform of the All-India Muslim League. He was among the leaders who put his heart and soul into bringing Pakistan into being by taking an active part in the historic elections.

Services for migrants during the partition

The migration took place at a massive scale after the partition. Hundreds of thousands of Muslim migrants braved hardships and sufferings to come to the newly established state of Pakistan. Dr Farid-ud-Din Qadri joined other volunteers to help the migrants. He was among the medical professionals who treated the migrants and provided them with the best medical care.

Tehreek-i-Pakistan Workers trust and Nazaria-i-Pakistan Trust awarded a gold medal and an appreciation certificate to Dr Farid-ud-Din Qadri in recognition of his exemplary services during the freedom struggle. Dr Hussain Mohiuddin Qadri, his grandson and President MQI, received the gold medal from Dr Arif Alvi, President of Pakistan, on February 3 2022, 48 years after his death. It goes to the credit of Tehreek-i-Pakistan Workers Trust and Nazaria Pakistan Trust that they have been looking for and celebrating the heroes of the freedom struggle who worked under the inspirational leadership of Quaid-e-Azam Muhammad Ali Jinnah in the final and formative years of Pakistan. 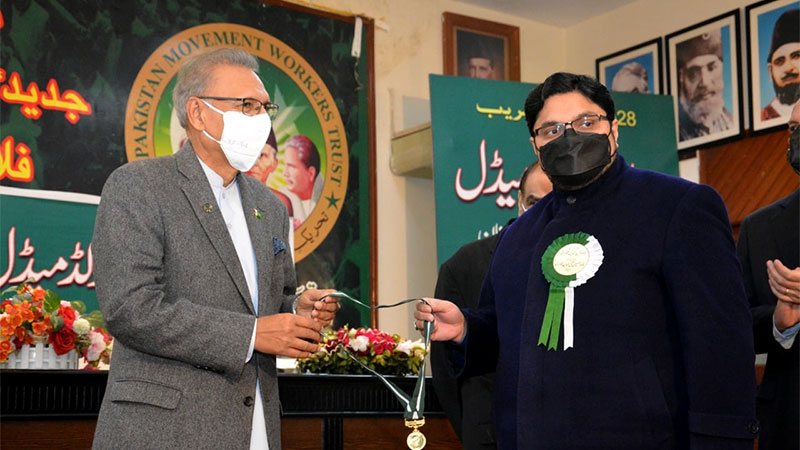 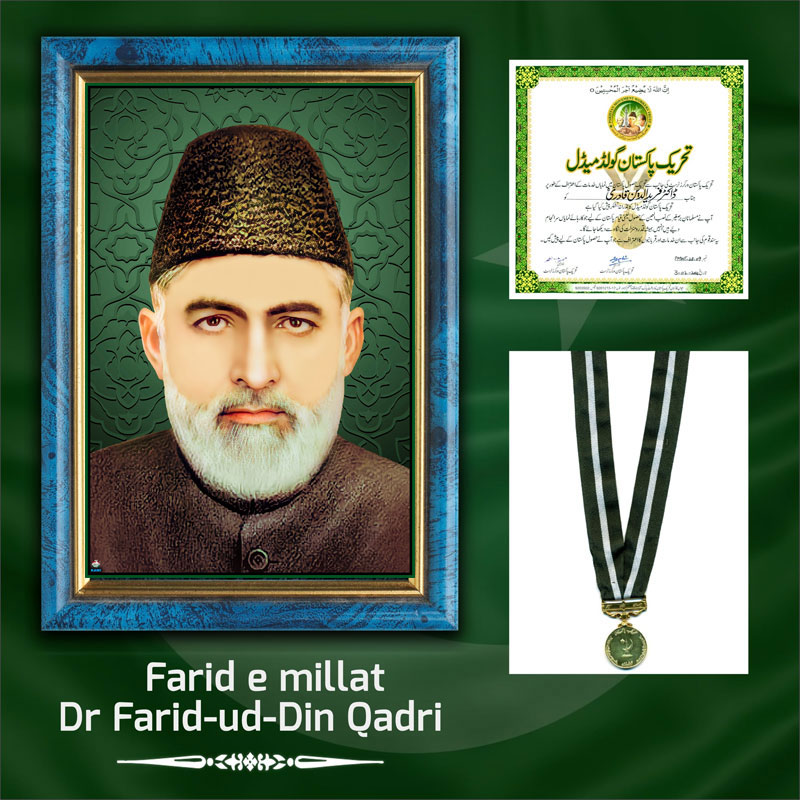 Farid-e-Millat Research Institute located at the central secretariat of Minhaj-ul-Quran International contains thousands of books and rare manuscripts. The personal library of Dr Farid-ud-Din Qadri was expanded into the Institute. The books that remained under his personal use can be seen in a corner, named Maktaba al-Faridia. 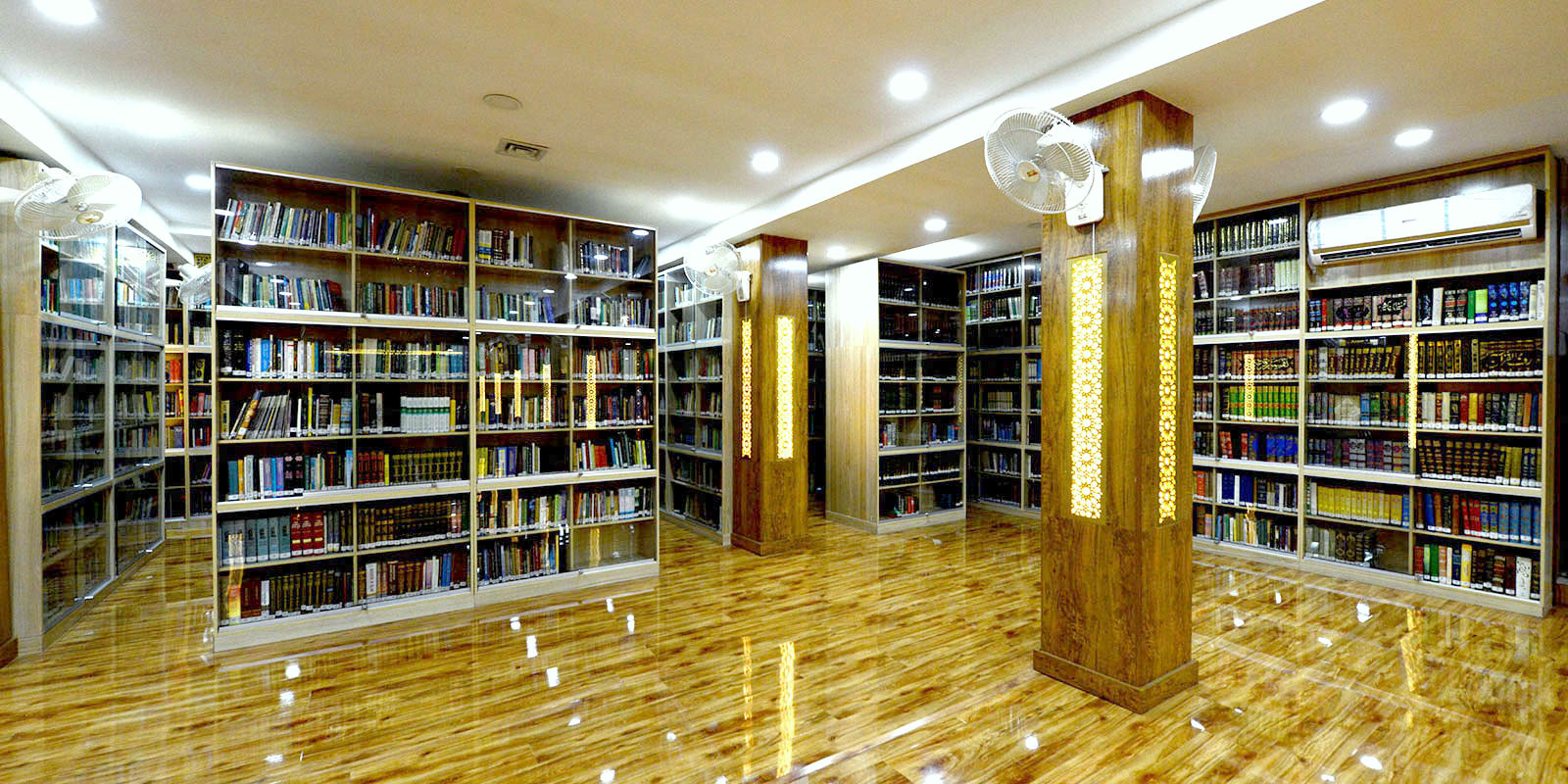 Shaykh-ul-Islam Dr Muhammad Tahir-ul-Qadri mentions the last days of his father's life in the following words: “My father Dr Farid-ud-Din Qadri had a lot of love for and special attachment with Maulana Rumi. He would passionately read Masnavi during the last years of his life. It is for this reason that I have always been attracted to the structure of Maulana Rumi’s tomb, its beauty and the ambiance. I have always been mesmerized by the tomb and have a special spiritual attachment with it.”

Dr Farid-ud-Din Qadri passed away on November 2, 1974 at the age of 56. He was laid to rest in the central graveyard of Jhang. His death anniversary is observed every year with solemnity. 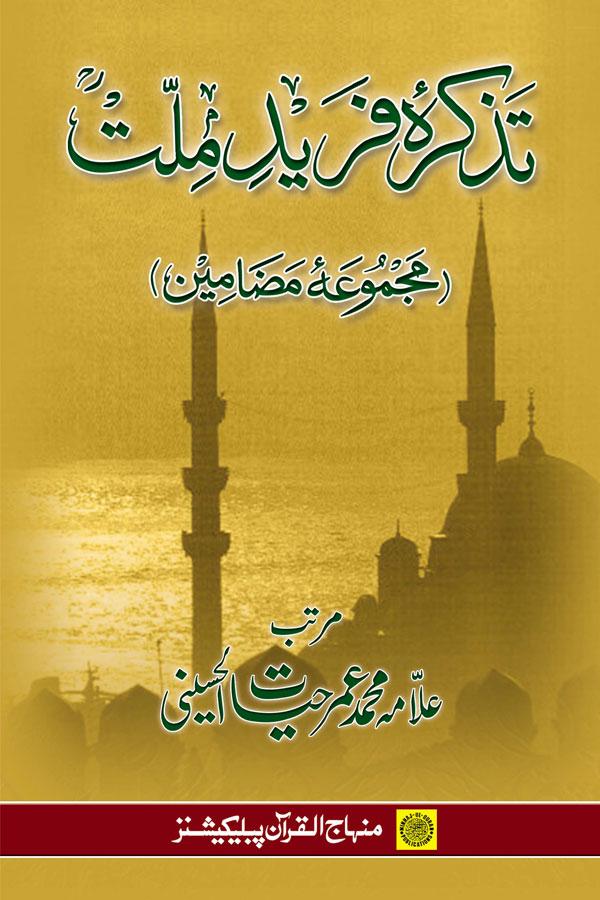 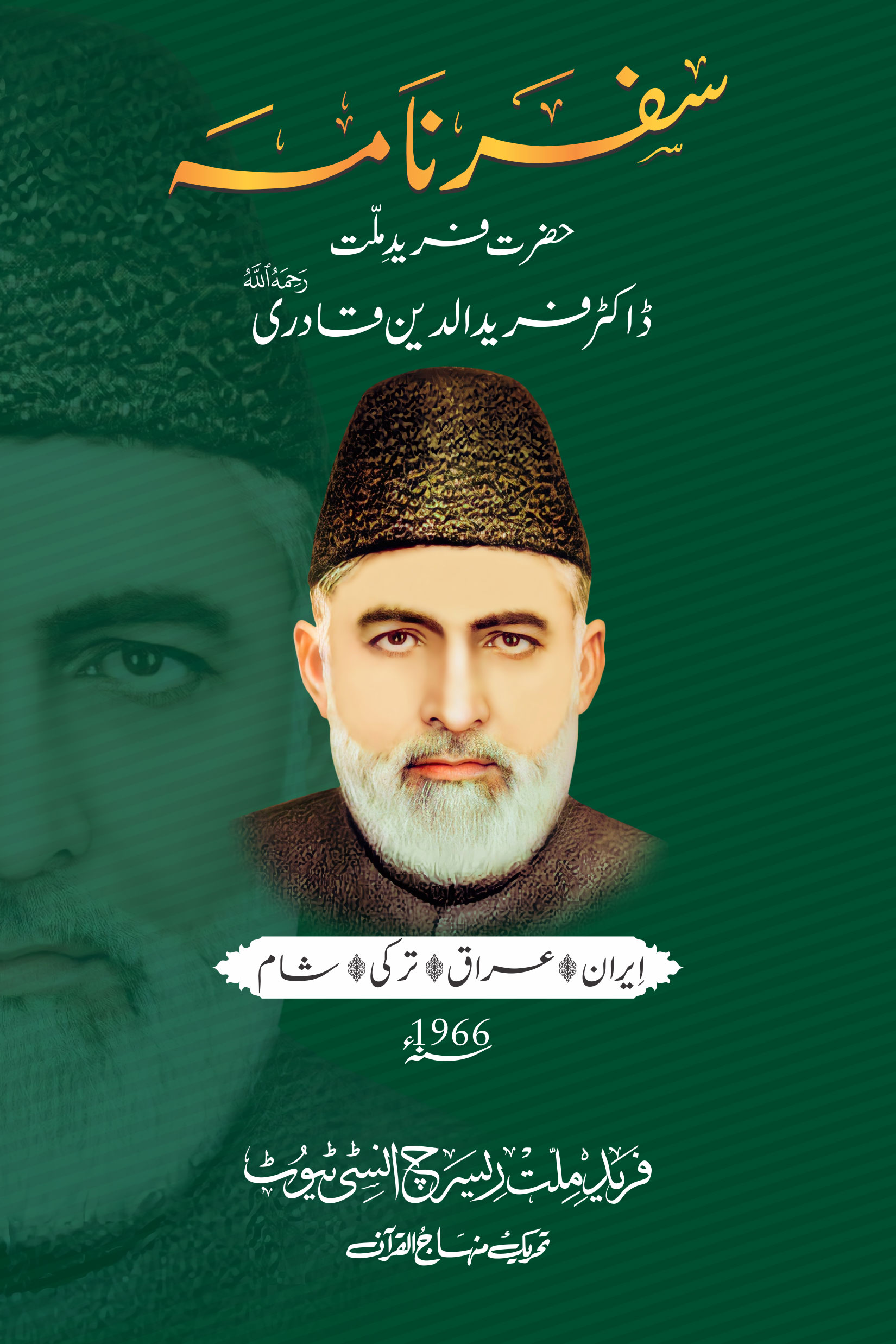