Long march moves on despite threat 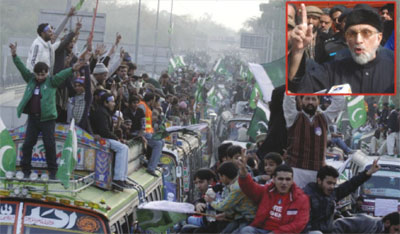 The organisers of the march had announced to start the long march at 9am from Minhajul Quran International but it started about 2.00 pm amid serious allegations leveled by Dr Qadri against the Punjab and federal governments.

When the march started from Minhaj ul Quran Secretariat, the participants were in a few thousands but later it continued to develop Police had adopted foolproof secu-rity arrangements while Minhaj ul Quran had also made security arrangements at its own level. Police had given a movement plan to the organisers of the march. A special bomb proof truck was prepared to transport the TMQ chief which was equipped with all basic facilities. Elite Force jawans, personal security staff are escorting Dr Qadri. Before start of the long march, Minhajul Quran International chief Tahirul Qadri criticized Punjab government for creating hurdles in their way. He accused the pro-vincial government of arresting the bus drivers, detaining vehicles and stopping peo-ple from participating in his convoy. He blamed local authorities for the delay and said he had to make other arrangements after the vehicles were snatched by the gov-ernment.

He demanded dissolution of Balochistan Assembly over its failure to live up to its responsibilities of protecting rights of the masses. He slammed deadly blasts that killed over hundred people in Quetta.

Qadri said his long-march is aimed at giving due rights to the people. He lashed out at Interior Minter and blamed for creating hurdles in the march. He termed the long march as a ‘March for democracy’ and added that all the transporters who were not being issued permission and licenses to participate, should carry on with the march to Islamabad without the approval. He said his march is meant to end oppression, cor-ruption, poverty and unemployment.

Qadri claimed in Islamabad trenches have been filled with explosives and tankers of acid parked in the city. Despite all hurdles we will attain the objective of revolu-tion, he said. He called his long march a Hussaini mission and a battle between op-pressors and oppressed.

Qadri alleged Takht-e-Lahore has made the city Kufa and sealed all cities and towns of Punjab. The buses have been hijacked and drivers kidnapped, he alleged.

The participants of long march were still in Lahore till the filing of this report.

It may be noted that Interior Minister Rehman Malik had conveyed to the organiz-ers that they faced security threats and militants are planning to target the gathering.

On the other hand, spokesman of Punjab government denied all the allegations of r Qadri saying people have rejected his long march call and what he (Qadri) is alleging are mere baseless allegations.

He said Punjab Government had written a letter to Dr Qadri for finalising his secu-rity and other matters but he had not responded. He said the provincial government did not create any hurdle in this march.

During the day PML-Q leadership also remained in touch with Dr Qadri.

It may be recalled that PML-Q President Chaudhry Shujaat Hussain and Deputy Prime Minister Chaudhry Pervaiz Elahi after talks with Dr Qadri had told reporters that important headway has been made in negotiations whereas consultations on legal points will continue.

Strict security measures were adopted in Punjab and particularly in the Federal Capital. All the roads to the Capital have been blocked and containers were placed.

Interior Minister Rehman Malik had conveyed to the organizers that they faced se-curity threats and militants are planning to target the gathering. He warned the march-ers that no violation of law would be tolerated.

Tahir-ul-Qadri, Saturday categorically refused to postpone long march saying his long-march could not be purchased. He reaffirmed his resolve thrice that the march would be held at any cost.

The TMQ leader said that he raised voice to get the people their due rights. He said that no one could buy him and stop from holding long march.

On Saturday, Qadri announced his seven point Charter of Demand for his long march and said these seven points included electoral reforms‚ and about the caretaker government.

The long march was described by Dr Tahirul Qadri as the ‘democracy march’ be-gan from Lahore’s Model Town with lot of fanfare and participation of thousands of people amid tight security.

A special bomb proof truck was prepared to transport the TMQ chief which was equipped with all basic facilities.

Qadri lamented that the government had seized their vehicles and arrested workers. The TMQ chief said that the administration had impounded a large number of vehi-cles hired by his party for marchers. He said 25,000 buses were hired for the partici-pants. He vowed to reach Islamabad at any cost and bring a revolution for changing the destiny of the country.

Preparations continued through night as activists of the TMQ were seen placing banners and loud speakers on trucks buses and other vehicles they hired for travelling. Long March’s the departure, which was scheduled at 09:00 am was delayed un-til Zohr prayers. Qadri blamed local authorities for the delay and said he had to make other arrangements after the vehicles were snatched by the government.