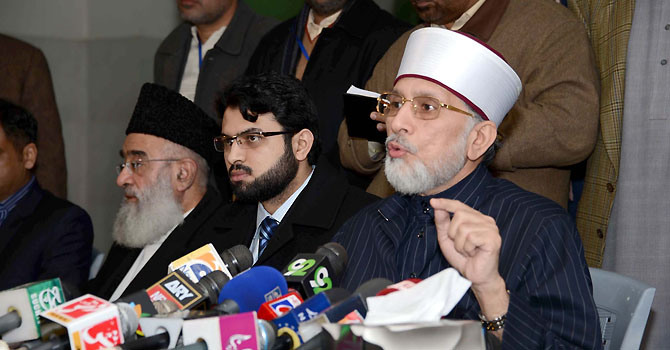 LAHORE: Tehrik-i-Minhajul Quran (TMQ) chief Tahirul Qadri on Sunday led thousands of supporters at the start of his long march on the capital Islamabad, demanding key reforms before the upcoming elections.

Hundreds of cars, buses and trucks carrying around 7,000 people left Model Town in the city of Lahore, expected to grow in number as they pass through towns and villages en route to Islamabad, accompanied by a heavy security presence.

Qadri accuses the government of being corrupt and incompetent, and argues that Pakistan must enact “meaningful” reforms before general elections, which are scheduled to be held within eight weeks after parliament disbands in mid-March.

Speaking prior to kicking off what he termed his “march for democracy”, Qadri accused the Punjab provincial government of impounding buses and detaining drivers in their efforts to hamper the protest.

Qadri, however, vowed to lead the march to the federal, and urged supporters to join him despite all hindrances.

“This is a march for protection of human rights, elimination of poverty, supremacy of constitution, rule of law and end of corruption,” he said, urging transporters who were not being issued permits and licenses to participate without the provincial government’s approval.

Qadri’s march comes amid widespread demonstrations in major Pakistani cities in solidarity with the victims of a series of gruesome bombings in Quetta on Thursday. The relatives of the victims, mostly from the minority Hazara Shia community, have refused to bury the dead as long as the Army takes control of the city, which is the provincial capital of Balochistan.

Thursday’s bombings, which claimed over 100 lives and were targeted at the minority Hazara community, were claimed by the banned extremist militant group Lashkar-e-Jhangvi (LeJ).

Speaking about the violence in Quetta, Qadri also demanded that the Balochistan government be dismissed before his caravan reaches the federal capital.

A special bomb proof truck was prepared to transport the TMQ chief, equipped with all basic facilities including a jammer capable of forcing explosives from detonating.

The authorities have sealed off the main approaches to Islamabad and warned that the Taliban could attack the march, leading to the closure of schools, businesses and embassies on Monday when the rally is expected to arrive.

Police had earlier said that 10,000 officers had been deployed along the route of the march for the security of the protesters and that an elite commando squad would guard Qadri.

Mohammad Farooq, 50, said he travelled from the eastern industrial city of Faisalabad to join the march, adding that he was prepared to die for the cause.

“We are going to Islamabad to change the exploitative system and will not budge from our mission and even sacrifice our lives for it,” he said.

The rally is expected to converge outside Islamabad from various starting points in Punjab. The march’s first stop over would take place at the shrine of Sufi Saint Data Ganj Baksh. Fuel canisters and trucks laden with rations also accompany the protesters.