4 Million Pakistanis in ‘Save the State, not Politics’ Demonstration 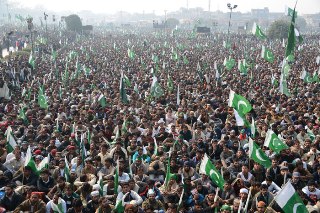 Two weeks ago, I flew in from Qatar to Pakistan to attend and support the most peaceful long-march with millions of Pakistani people. We marched from Lahore, through seven cities towards the Parliament House in Islamabad.

I'm not the kind of person to write down a whole story, but this one is worth reading. I will take you day by day through my journey.

The concept of Long March initiated when Dr. Tahir ul Qadri held the largest gathering in Pakistani history on December 23, 2012 in Lahore, Minar-e-Pakistan. This gathering was held to achieve electoral reforms in Pakistan in order to filter out all the corrupt, tax-avoiding ministers and politicians.

On the way to Islamabad, we passed major cities and over 100,000 people had already joined the march. The government tried everything to block this march, such as taking possession of our busses, blocking phone network, up to blocking our way with massive containers.

On our way, we were welcomed at every other city by 10,000's of people. People were on the roofs, bridges, on the side of the road, or joined us.

People threw flowers at all attending the long-march and you could just see the expression on their face.

Finally, somebody is here to save to poor people of Pakistan. Finally, He is here. Finally, Dr. Tahir ul Qadri is here! Everybody in the march believed…

Long march led by Dr Tahir-ul-Qadri's entered Islamabad - the federal capital of Pakistan. The rally made its way to the Blue Area where a sit-in was held until the demands of the Tehreek-e-Minhajul Quran are met.

Strict security arrangements were made along the route of the long march and mobile phone services were suspended.

We reached Islamabad three miles from the Parliament House and Dr. Tahir ul Qadri held a short talk, to demand article 62, 63, 218 to be implemented by the Supreme Court during elections.

Whilst he talked, government had sent elite forces in to try and stop Dr. Tahir ul Qadri and to arrest him. The elite forces closed up on us, as you can see on this image, and as we remained peaceful, they immediately upon request of the commander started to shoot bullets and used forces to attack us.

The Pakistani people on the other hand, weren't going to give up this easy, and we fought back. We fought back hard and we won. 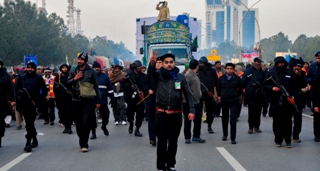 Dr. Tahir ul Qadri warned the government to dissolve assemblies by January 16 as he was declaring them null and void from this platform, Geo News reported. "The ones sitting in the offices are erstwhile president and prime minister. Their time is up as our time is now", said Dr. Qadri addressing millions of his devoted cohorts sitting under the sky in the foggy cold night.

Now I want to explain two or three important points regarding the happenings of the last night. The cowards of law enforcement agencies at this night again planed to stage an attack, like the one they did in the morning.

Dr Tahirul Qadri gave two days deadline to the government to step down, Geo News reported on Wednesday. Continuing with his address to the participants of the sit in at D-Chowk, he said that the parliament is protecting goons and plunderers, claiming that they would flee soon. He said that democracy demands the protection of fundamental rights rather than encouraging competition between the powerful and poor.

Then the leader of the poor people had enough! If the government does not want to listen to our demands, then we don't listen as well! Then we will command, not demand! Dr Qadri has set another ultimatum to the government to accept his demands, Geo News reported.

Addressing the participants of sit-in at D-Chowk, Qadri issued one-and-a-half-hour ultimatum to the government, saying he would issue future line of action at 3:00PM. He said he is giving last chance to the peace and democracy. He said January 17 is the last day of sit-in, adding he wants to end this battle before this evening.

Exactly at 3:00pm we received a phone-call from the government. A committee accepted to negotiate. After the successful negotiations between the committee formed by the government and Tahir-ul-Qadri, the declaration containing the terms agreed upon was signed by the Prime Minister and approved by the President, Geo News reported Thursday.

Earlier, addressing the participants of the sit-in after the conclusion of the negotiations that continued for over four hours at D-Chowk, Dr Tahir-ul-Qadri said an Islamabad Long March Declaration had been agreed upon and that its contents would be announced after it was signed by the prime minister.

And then the moment broke down we all fought for! It was done! The Islamabad Declaration was signed!

The National Assembly shall be dissolved at any time before March 16, 2013, (due date), so that the elections may take place within 90 days.

One month will be given for scrutiny of nomination paper for the purpose of pre-clearance of the candidates under article 62 and 63 of the constitution so that the eligibility of the candidates is determined by the Elections Commission of Pakistan.

No candidate would be allowed to start the election campaign until pre-clearance on his/her eligibility is given by the Election Commission of Pakistan.