Being a dual national does not make Tahirul Qadri a traitor 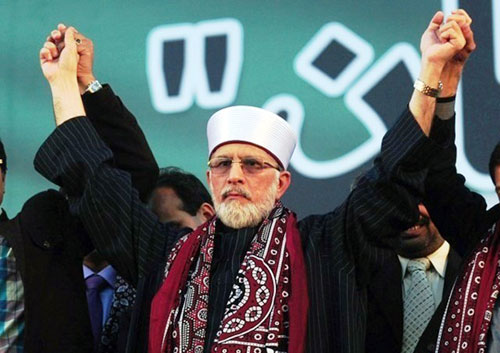 Most Pakistani’s would have loved that scene in ‘The Dark Knight Rises’ where Cat-woman tells the Batman to run away, having given Gotham everything and owing it nothing more, to which he replies that he had not given the city everything yet.

It reinforces that long held belief that the true Pakistani will never abandon his country, especially for sunnier climes of life security, income security, food security and pretty much every domestically nonexistent security one can imagine.

Reared on the pop-rhetoric of ‘Be Pakistani, buy Pakistani’ and other self-aggrandising slogans, we subconsciously detest the idea of our human resource flying and adding to foreign land. Therefore, we eulogise those who decide to stay, forgiving the fact that a palpable majority might be making up for lost opportunity unscrupulously, while wasting no time in vouchsafing second-class status to those who choose to bail out, so to speak.

But this feeling we have is subconscious, kept effortlessly under the surfaces of our psyches until some once-in-a-blue-moon stimulus comes along and yanks it to the surface.

One such stimulus happens to be Dr Tahirul Qadri whose presence seems to have emancipated our feelings when it comes to expatriates. His petition, ideally to be evaluated only on the merits of its constitutional viability, ended up being denounced concomitantly on account of being the machinations of a foreign national as well; the particularly troublesome fact being that this denunciation came not from a political party but from the Supreme Court of Pakistan.

Now, I do not support Dr Qadri in that, he is not a stake holder in the parliament. The matter of the integrity of the Election Commission of Pakistan can only be questioned by those who are participating in the election process and since Dr Qadri as a dual-national is ineligible to enter the elections himself his objection regarding the setup of the Election Commission of Pakistan is rendered moot.

If the court had merely said this justice would have been served.

Instead, the petitioner’s Canadian nationality was brought to the fore and the chief justice noted that since he had taken an oath to serve the Queen, didn’t his being interested in Pakistan present a conflict of interest?

First off, do people really believe that Canadians have anything substantial to do with the Queen anymore?

The British Government takes its decisions inside its legislative Houses and if the British themselves are not actively kowtowing in the Queen’s palace for legislation and affairs of the state, how really is the Canadian Government?

Second, why must it be assumed that any foreign country must ultimately have a nefarious design for Pakistan?

Isn’t it possible that a foreign country can spend one day without hatching some new scheme of subverting Pakistan?

Is it really too much to ask for?

‘Ultimately, these remarks leave one with the impression that true well-wishers of Pakistan will only be found in Pakistan, and that anyone who is ‘unfortunate’ enough to take the nationality of a country other than our own is a turncoat.

Calling expatriates disloyal doesn’t just question the integrity of one man, it questions the character of all men and women (and maybe children too) who decide to take nationality at any place other than Pakistan.

I would argue the importance of expatriates as an invaluable source of foreign remittance but quite frankly, they deserve respect even if they weren’t.

These people took a new oath; that doesn’t mean they forsake the one they took earlier. To presume so and to assume haughtiness on account of it goes against the basic principles of human decency.

These people are citizens of Pakistan and unless they actively renounce us, we have no business treating them as if they already have.