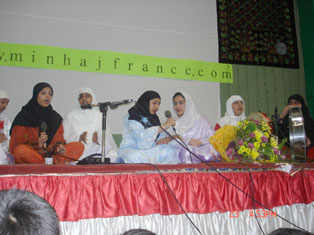 On the 24th of April 2005, by the Grace of Allah Almighty and His Beloved Prophet (SAW), Minhaj-ul-Qur’an Women League and Sisters League, Paris celebrated the happiest day in the Islamic calendar, the birthday of our Beloved Prophet Muhammad (SAW).

Sisters from many different backgrounds including Pakistani, Mauritian, and Arab sisters all gathered to take their part in Allah’s Rahmah and Blessings. Alhumdulilah the hall was completely full for this ‘Eid of Eids’, breaking all the previous attendance records.

The conference commenced with the recitation of the Holy Quran by Hafiza Nafeesa Arshad followed by sister Asma Parveen who praised Allah Almighty by reading the Hamd “Ya Hayyu Ya Qayyum”.

The sisters Minhaj Nasheed team read collective ‘salat u salam’ and ‘darood’ upon the Holy Prophet during intervals followed by nasheeds read by a variety of sisters. Our little sisters, students of Minhaj Educational Centre Paris started the series followed by sister Sidra, and Mrs Nasra. 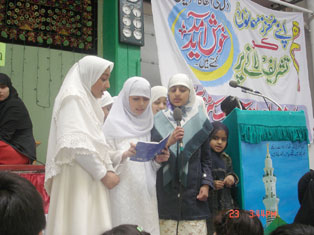 Then sister Sabba Qazi was invited to express her views on this great occasion and explained to us why the love for the Prophet (SAW) is imperative in our lives. She compared our bodies to a house, which needs to be decorated and requires the basic element of light. It is almost impossible to live without light, as we cannot see anything in the dark. The same is true for our bodies. We can feed our body but as long as our heart is not enlightened, having no light inside, it is similar to a dead body. Quoting a verse from the Holy Quran, she said that Allah (SWT) loves those who love His Beloved Prophet (SAW).She advised the audience not to darken their ruh (spirit), nor to waste their lives but to bring noor (light) into their lives and to allow their hearts to become receptive and thus become the home for the love for Muhammad (SAW). She then explained how to put this into practice: “do all of your deeds for the sake of Allah (SWT) and His Beloved Muhammad (SAW), and then you will feel the pleasure and satisfaction in each of your acts. In other words, change all of acts according to the Sunnah of Holy Prophet (SAW).” 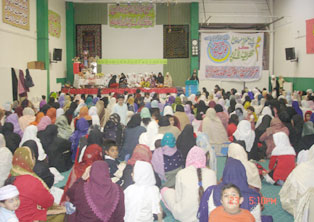 Afterwards a former student of ICIS delivered a speech on the letter “alif” (first letter in the Arab alphabet) from the word Allah. She explained and discussed in detail three aspects of this letter including the letters spiritual significance regarding the attachment one should have to Allah Almighty and His beloved Prophet (SAW).

The youth sisters then read two magnificent qawalies ( Nabi Sayyedul and Ya Nabi) in the praise of the Holy Prophet (SAW) intensifying the atmosphere in the audience. During the entire event, participants were welcomed with takbeers that every one answered with enthusiasm. Then sister Nafeesa Arshad delivered a very informative talk reminding us of the sermon that all the Prophets made to Almighty Allah before being sent on the earth. Indeed, they all promised that they would believe in the Last of the Prophets and would teach their people about his arrival.

A further series of nasheeds were read by sisters Sabba Arshad, Kiran, Ambar, Samina, Sabrina, Sana, Iram, Maria, Musarate, Wafia, Sehrish, Attia, and Samra. Then Sister Hina Butt was invited to express her views in the French language. The topic of her talk was the importance of companionship and how we need to be with the right persons, those who are on the straight path. She emphasized that we are lucky to be part of the Muslim Ummah of Holy Prophet Muhammad (SAW) who is a role model for the entire humanity.

After more nasheeds were read, the conference finally ended with the recitation of greetings and salutations on the Holy Prophet (SAW) and a du’a. At the end, food was served and the birthday cake of our Holy Prophet (SAW) was cut and served to every one, making the children very happy! 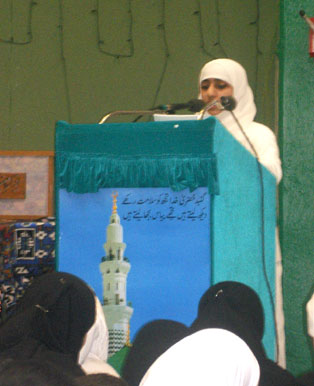 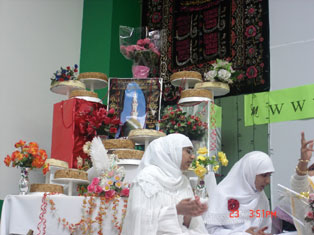 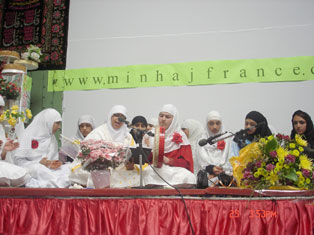 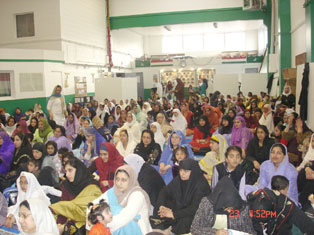