The devastation of the Asia earthquake resulted to people all over Britain donating and contributing as much as they possibly could. 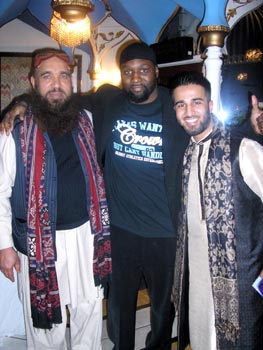 The devastation of the Asia earthquake resulted to people all over Britain donating and contributing as much as they possibly could. These contributions have helped a great deal, however much is still needed to restore this region of Pakistan.

Under the Muslim Youth League, Imran, Sahirah, Muneeza and Alay have volunteered and created a welfare committee, working in partnership with the intercultural societies of universities. The welfare committee has taken a mulit-cultural and diverse approach, when looking at issues both nationally and internationally.

As a part of such committee we decided to contribute and help the people in Pakistan, who have been affected by the earthquake. We organised a charity dinner, which we thought would help in raising the money which would be needed. Initially our target was only to raise £1000, however with the help of the guests who attended the event it was possible to make more than that what was expected. The charity dinner successfully raised an estimated £2325 and donations are still flooding in. All proceeds are going to Minhaj Welfare Foundation, which is the charity that we have decided to donate the money to.

Much planning was needed and the workload was delegated to all four members of the group. 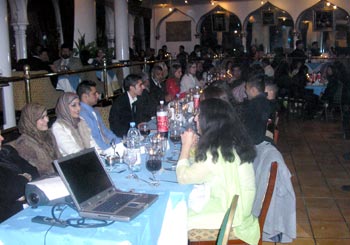 The first step that the group took was to initiate a meeting and discuss the venue where the charity dinner would be held. We decided on three venues of which all the members popularly voted Mumtaz restaurant. Once this was finalised, both Imran and Sahirah arranged a meeting with the restaurant managers of Mumtaz to discuss the initial plans for the charity dinner. We successfully arranged the date, time and food arrangements and order of drinks, which Alay had taken care of.

The second step was to print and sell tickets. The layout and lettering of the tickets was, again, voted and decided by all members of the group. The tickets were distributed four ways, giving each member twenty-five tickets to sell. In addition both raffles and celebrity guests were also discussed. We managed to gain up to twenty-two raffle prizes through donations as well as getting Danny Williams to attend the event.

On the actual day of the charity dinner, all four member of the group arrived at Mumtaz restaurant during the afternoon in order to prepare for the event the same evening. Seating arrangements were discussed and were arranged in accordance to a seating plan, which had previously been developed.

All the guests had arrived including our main guests, members of Minhaj Welfare Foundation, Danny Williams the Brixton boxer, Brother Rizwan Hussain from the Islam channel, Mubashir from ARY digital, and Brother Irfan from the MPAC organisation. The event was most successful as it included a three course meal, whilst brother Rizwan spoke of ‘Sadka’. Thereafter, Danny William’s approached each table and gave his salaam, in addition Danny William’s liased and took pictures with all the guests. The raffles were presented by Mubashir of ARY digital who presented the raffle prizes to our winners.

Finally, this was one event which has raised money and has been a success, however much is still needed to be done as this is the beginning of a long journey which youths such as our selves, can all take. This type of event entailed hard work, dedication and motivation, which was evidently observed on the night, anyone can accomplish this, however young or old you are.

Jazakallah to all our guests who attended the event and we’ll keep you posted on events taking place in the future. Inshallah.