A Warning for Late Prayer 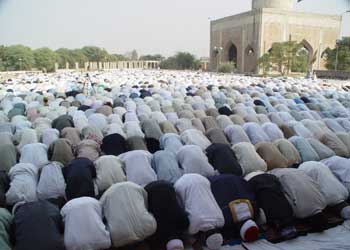 She always remembered her grandmother’s warning, “ My daughter, you must always pray on time, do not delay the prayer.”  Although her grandmother was aged 70 whenever she heard the adhan she shot up like an arrow from a bow and performed her salah.  She, however, was always last to offer prayer and offered it hurriedly.

Hastily she grabbed the prayer mat realising she had but 15 minutes before Salat-al-Isha would end.  Her grandmother’s words pulsed through her whilst in sajda. When she lifted her head she found herself sat bolt upright in bed, with beads of sweat trickling like tiny pearls from her brow.  A hideous sound had awoken her from her sleep. All about her was chaos, people running in every direction.  Some people on their knees with raised hands.  She was terror-stricken on realising what was happening.

The dreaded day of judgement had arrived.

She recalled hearing many things about this long-awaited day but all of that seemed a distant memory.  Fear of the unknown permeated every part of her.  She spotted her parents and ran frantically towards them.  They looked blankly at her and fled in the opposite direction.  Suddenly bellowing out from nowhere, yet everywhere she heard her name called aloud.  She stood frozen to the spot.  A few moments of stillness enveloped her and she saw the mass of humanity cleave apart as did the ocean for Moses (as).  She was led by two angels dressed in white, one on each side of her, down the path that had been cleared for her.  Arriving at her destination, with apprehension she lifted her bowed head and opened her eyes.  In front of her was another world.  Her brother was running from one gathering to another, giving his belongings and wealth in the way of Islam; her mother serving guest after guest, whilst carefully observing purdah.

She too pleaded her case. I followed the five pillars of Islam, whatever Allah’s (swa) command was I obeyed.  I followed the right path.  Her life flashed before her like a documentary, her eyes firmly fixed on the Scales of Justice.  The two angels produced their papers of recorded deeds.  The final decision about her fate was at last about to be sealed.  The angels dragged her towards the fiery abyss of Jahannam.  She was screaming and pleading for help quoting all of her good deeds including her salah. The angels finally reached the edge - towards the rocks of fire she fell.  Plunging deeper and deeper into the fiery pit, she felt the indescribable force of the heat - it seemed like an eternity. She had almost reached the bottom when a gentle hand pulled her back up to safety.  Turning to see who her rescuer was she said, “The flames almost reached my skin, who are you and why did you leave it to the last minute?”  The old fair lady smiled and shook her head and replied, “I’m your salah, you were always late for me!”

At once she raised her head from salah and broke out in a sweat.  It was time for Salat-ul-Fajr, quickly she went to perform her Wudhu!

Qurán and Hadith Regarding Delayed Prayers or Missing the Prayer

Allah most High says: “Then there succeeded them a generation which neglected prayers and followed lusts. They will meet with destruction (Ghayy), excepting the one who repents and believes and acts righteously”. (Quran 19:59-60)

“Woe to the worshippers who are unmindful of their prayer. Those who delay their prayer”.  (Quran 107:4-5)

"What caused you to enter Hell-fire?" They will say: "We were not among those who prayed, nor did we feed the needy. We used to engage in vain discourse with the vain-talkers, and we used to deny the Day of Judgment, until there came to us that which is certain (i.e.. Allah's judgment)." Then no intercession by an intercessors will benefit them. (Quran 74:42-48)

The Prophet (SAW) said: "The first thing which will be judged among a person's deeds on the Day of Resurrection is the prayer. If that is in good order, he will pass the test and prosper, and if that is defective, he will fail the test and be a loser." (Tirmidhi)

The Prophet (SAW) said: "The covenant between us and them (that is, believers) is prayer, so if anyone abandons it he has become an infidel." (Ahmad, Ibn Majah, Abu Dawood, Nisai, Tirmidhi).

The Prophet (SAW) said "What lies between a man and infidelity is the abandonment of prayer." (Muslim)

It is narrated by Abu Al-Mahh: We were with Buraida in a battle on a cloudy day and he said, "Offer the 'Asr prayer early as the Holy Prophet (Saw) said, "Whoever leaves the 'Asr prayer, all his (good) deeds will be annulled."  (Sahih Bukhari)

And he said: "If anyone abandons prayer deliberately he has no claim upon Allah" (Sunan).

It is narrated by Qais: Jarir said, "We were with the Holy Prophet (saw)and he looked at the moon--full-moon--and said, 'Certainly you will see your Lord as you see this moon and you will have no trouble in seeing Him. So if you can avoid missing (through sleep or business, etc.) a prayer before the sun-rise (Fajr) and a prayer before sunset ('Asr), you must do so.' He then recited Allah's Statement:

And celebrate the praises Of your Lord before The rising of the sun And before (its) setting." (50.39) Isma'il said, "Offer those prayers and do not miss them." (Bukhari)

Abdullah bin amr bin al-As (RAA) narrated the Holy Prophet (SAW) said mentioning the prayer, "If anyone keeps to it, it will be light, evidence, and salvation for him on the day of Resurrection; but if anyone does not keep to it, it will not be for him light, evidence, or salvation; and on the Day of Resurrection, he will be associated with Qaran, Pharoah, Haman, and Ubayy bin Khalaf (a great enemy of Islam from among the Quraish)." (Ahmad, Darimi and Baihaqi)

Mu'adh bin Jabal (RAA) reported Allah's Messenger (SAW) as saying: "If anyone abandons prayer intentionally he has no claim to Allah Most High." (Ahmad)

Umar ibn al-Khattab (RAA) reported that a man asked the Prophet (SAW):  "Messenger of Allah, what action is dearest to Allah Most High?" The Prophet (SAW) replied: "Prayer at its proper time. The one who does not pray has no religion. Prayer is the main pillar of the religion (of Islam)." (Baihaqi)