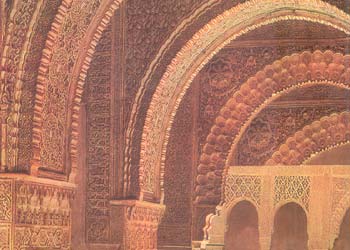 There will often come a time in one's life when the smooth order of things changes, where life which was once plain sailing becomes a perpetual uphill struggle. Friends may turn their backs on you and others who promised so much let you down. At this juncture in one's life it may be an idea to stop and reflect from those who have lived through times such as those illustrated here, to learn and ease the many burdens that we all carry.

One such person was a man by the name of Abu Bakr radhi Allah anhu. His life too changed from a happy and apparently peaceful existence to one of social and political upheaval. From a time of status of wealth to a time of poverty and homelessness; where he was forced to openly fight for his very survival and when friends walked away, their eyes and ears closed. He was a man that despite all the trials and tribulations he faced with the Prophet Muhammad sallallahu alayhi wa sol/am, never surrendered his innate qualities. Where many a good man would have become bitter, angry and desolate he remained loyal courageous and humble. Where others sought to salvage their wealth and status he fought to remain generous and dedicated. In essence this is story of a man who never gave up.

How many of us would have displayed such loyalty and fortitude, or do so know? When our faith is tested we often become bitter and feel the world owes us something, that others should recognize our need and respond accordingly. Yet Abu Bakr radhi Allah anhu was always the first to act despite his own problems and this generosity became legendary. If a slave, who had become a Muslim, desired to be free it was Abu Bakr they turned to. If there was a poor and needy person it was Abu Bakr who would fulfill that need. These were times when Muslims were persecuted and hounded. Money was scarce and thus was even more precious. Throughout his life however, whether to pro- vide armaments for battles or to provide a cup of water to an orphaned boy, even if it would mean that his family and himself would go without food and basic necessities of life his generosity was never ending.

How many of us respond to the financial and emotional needs of our less fortunate brothers and sisters? Yet it was these qualities that made Abu Bakr radhi Allah anhu esteemed by all. He was led and cherished by the Prophet Muhammad sallallahu alayhi wa sallam and respected and honored by the Companions. Despite this accolade gained during his life Abu Bakr radhi Allah anhu retained humility and modesty admired by all. Never did he seek praise and glory for his deeds. He expected neither wealth nor fortune for his sacrifices but to seek the pleasure of Allah. One would never hear him talk of the sacrifices that he had made for his Deen, sacrifices that included his family being spilt because of Islam. Sacrifices of wealth power and prestige. Instead if an act needed to be undertaken he would bear the burden. When the Prophet sallallahu alayhi wa sallam asked him to accompany him on the Hijra he did so. As they approached Madinah after a long and treacherous trek the people of Madin mistook Abu Bakr radhi Allah anhu for the Prophet Sallallahu alayhi wa sallam .Upon realizing this he immediately covered the Prophet Sallallahu alayhi wa sallam to protect him from the heat but also to signify to all who the leader was.

How many of us would display such humility? How many of us are quick to be acknowledged for the acts that we do? Indeed, how many of us would, when faced with adversity and strife, adhere to the qualities of loyalty, generosity and modesty? Perhaps what needs to be learned from the life of Abu Bakr radhi Allah anhu is that we are not the only ones who have lived through testing times but that there were others who suffered who were mortals like ourselves. They were people who bore the pains with a quiet dignity. Inshallah many of us will do likewise.