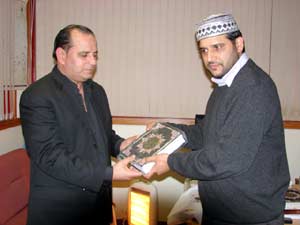 in Forest Gate, London, UK to pay respects to the late former prime minister of Pakistan, Benazir Bhutto.
Imam Sadiq Quershi led worshippers in prayers on Friday for the late Benazir Bhutto who died in a suicide attack in Rawalpindi, Pakistan. Imam Qureshi told mourners in a rather sombre mood â€œthe beautiful fragrance of Benazir Bhutto will continue to dwell in peopleâ€™s heartsâ€‌ he told listeners â€œit seems as if the poor and destitute have been deprived of their hard labourâ€‌ 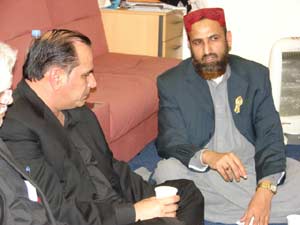 Ishtiaq Ahmad, president of the London based Minhaj al-Quran centre said â€œwe are deeply saddened with the loss of Benazir Bhutto whom we had the privilege to work with she will be greatly missed by everyoneâ€‌. He further said â€œshe has left many memories of her charming and charismatic personality when she last visited our centre in the summer of 2003â€‌ Ishtiaq Ahmad also said that Islam strongly condemns suicide attacks and that this was an act of criminals.

آ Asif Shakoor, external affairs secretary of Minhaj al-Quran centre caught up with Benazir Bhutto at Newham Bookshop in early July 2007 he also paid tribute â€œI am deeply shocked, Benazir Bhutto will be remembered especially by the local community in Newham whom she visited on a number of occasions â€¦she touched the hearts of many people it will take time to come to terms with her lossâ€‌ He also said â€œshe was a torchbearer of womenâ€™s rights; she was a unique example for other womenâ€‌

Waqas Malik, vice-president of Pakistan Peopleâ€™s Party UK said â€œBenazir Bhutto was a religious person and determined to struggle for the cause she believed in until her ultimate end.â€‌ Meeting with members of Minhaj al-Quran Centre in London, Riaz Khan general-secretary of Pakistan Peopleâ€™s Party UK, saidآ  â€œBenazir Bhuttoâ€™s decision to become a life member of Minhaj ul Quran will surely benefit her in the hereafterâ€‌ and â€œwe ask for everyone to pray abundantly for herâ€‌ said Riaz Khan. 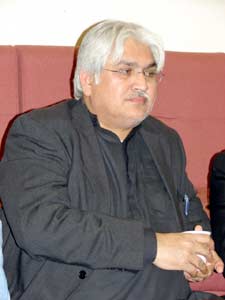 Councilor Dr Zulfiqar Ali chairman, Newham Alliance of Islamic Associations also joined hands in paying tribute; he said â€œthe assassination of Benazir is an irreplaceable loss of a politician of international standing. She was a lady of great courage, conviction and determination. Such killings are totally unislamic and unjustifiableâ€‌ He described the killing of Benazir as â€œdeplorableâ€‌. He further said â€œlet us pray that our Creator Almighty gives strength to the Pakistani nation to cope with this loss to maintain stability and unity in the country. This is the time to set aside political differences and work to restore calm in the countryâ€‌, said Cllr Dr Zulfiqar Ali.

Vigils continue to be said for the late Benazir Bhutto at the Minhaj ul Quran centre on Romford Road. Senior members of the organisation also attended a memorial service organised by members of Benzair Bhuttoâ€™s political party. Tributes were paid by faith leaders, politicians and members of Pakistan Peopleâ€™s Party.