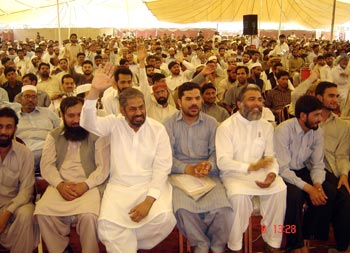 The annual workers convention of Minhaj-ul-Quran international was held at Minhaj Park, in front of Central Secretariat of MQI on the 8th of April 2007. Shaykh-ul-Islam Dr. Muhammad Tahir-ul-Qadri presided over the convention. Thousands of workers, members, local and district leaders from all the four provinces of Pakistan and Azad Kashmir attended the conventions. Among the revered guests were Sahabzada Hassan Mohay-ud-Din Qadri, president of Supreme Council, Sahabzada Hussain Mohay-ud-Din Qadri, representative of Youth and member of Supreme Council, Sahabzada Miskeen Faiz-ur-Rehman Durrani, Amir-e-Tehreek, Dr. Raheeq Ahmad Abbasi, Nazim-e-Aala, Sheikh Zahid Fayyaz, Naib Nazim-e-Aala, Sayyad Ali Ghazanfar Kararvi, Agha Murtaza Poya and many other leaders of Minhaj-ul-Quran International were present at the occasion. 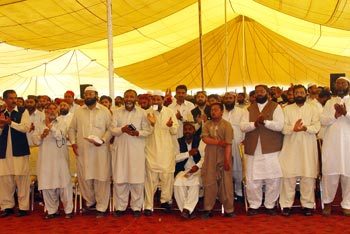 The programme started at 11:00 AM with the recitation of the verses from the Holy Quran followed by Naats. Shakil Ahmad Tahir, Sarwar Siddique and Muhammad Afzal Noshahi read the Naat of The Holy Prophet (SAW).

Shaykh-ul-Islam Dr. Muhammad Tahir-ul-Qadri along with his sons arrived at 12:40. He was given a warm welcome at his arrival. The audience chanted slogans Jeeway Jeeway, Tahir Jeeway and Jurrat-o-Bahadri Tahir-ul-Qadri. The whole surroundings were echoing with the slogans of people. Shaykh-ul-Islam waved his hands to his devotees and lovers who have come to see the radiant face of their beloved leader. 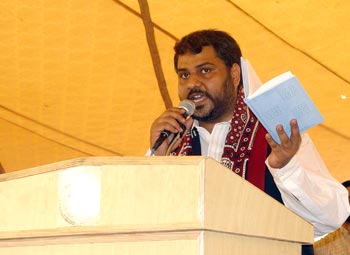 Sheikh Zahid Fayyaz presented a detailed report on World Mawlid Conference. He told in his report that the local Movement of Faisal Abad remained at the top keeping in view the number of buses. They participated with 152 buses. The Movement of Gujranwala, Rawalpindi, Jehlum and Sialkot remained on the 2nd, 3rd, 4th, and 5th respectively. 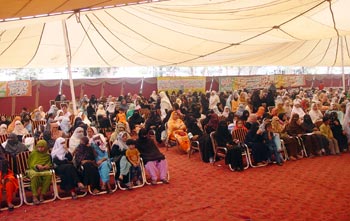 The number of women participants in the conference was not less than men in any way. It shows the dedicated work done by women league. Minhaj-ul-Quran Women League Faisalabad remained at the top if we keep the number of women participant from Faisalabad. Minhaj-ul-Quran women League Gujranwala, Jehlum, Sialkot and Okara remained on the 2nd, 3rd, 4th, and 5th respectively. Sheikh Zahid Fayyaz also told the audience that women also played an important role to arrange Irfan-ul-Quran circle in all the corners of the Pakistan. Minhaj-ul-Quran Women League Peshawar and Sialkot remained in this department at the top while Gujranwala women League achieved every target defined and assigned to it by central executive council. 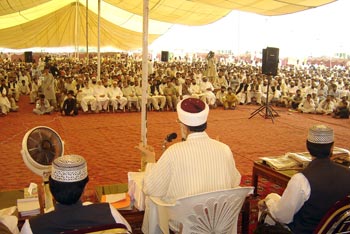 Besides that, many other forums working at the platform of Minhaj-ul-Quran International played their vital role for the success of conference and promote mission. The heads of their forums were congratulated on their magnificent performance. Qibla Hazoor asked the people to chant slogans in their praise. So, their performance was applauded publicly. Shaykh-ul-Islam presented special gifts of Sindhi Ajrak to the chief leaders of Minhaj-ul-Quran Sindh and NWFP. Sheikh Zahid Fayyaz Aslo presented Ajraks to these leaders on his own behalf as well. Shaykh-ul-Islam also gave special gifts of Sindhi Cap to the Nazim and Naib Nazimeens of Dawat (Forum assigned the task to invite the people to mission and train them spiritually) for their country wide visits and participation in different Mawlid Conferences within and abroad conferences. Rana Muhammad Idrees visited Haiderabad Dukkan India, on the 12th of Rabi-ul-Awwal as an ambassador and on behalf of Minhaj-ul-Quran. He addressed millions of people participating in the Mawlid procession. 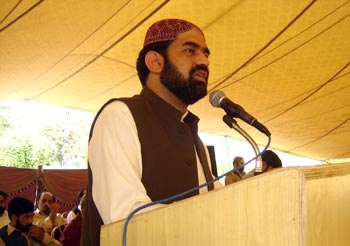 Allama Irshad Ahamd Saeedi, Allama Ghulam Murtaza Alvi, and Shakil Ahmad Sani were also presented with Sindhi caps. Allam Irshad Ahmad Saeedi visited Bangladesh and he addressed thousands of people in Dhaka. Allama Shakil Ahmad Sani had been on his visit to Larkana Sindh where he addressed thousands of people gathered to celebrate the birth of their beloved Prophet (SAW). Shaykh-ul-Islam told the workers that this forum has brought a big revolution in spreading awareness among the people regarding the Holy Quran. The total number of Quran circles is exceeding 215 and going up swiftly.

Shaykh-ul-Islam also lauded the performance of Minhaj Ulama Council. He gave gifts of Sindhi Ajraks to Haji Imdadullah and Moulana Asif Akbar, central leaders, of Minhaj Ulama Council for their remarkable performance for mission. Shaykh-ul-Islam also gave a gift to Respected Farrah Naz, Nazima Minhaj-ul-Quran Women League and her whole team for their wonderful work and their achievements for mission. He gave the gifts of Scarves to many other ladies who worked dedicatedly at local level. 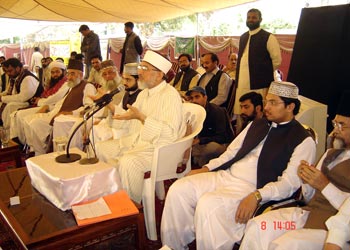 Sheikh Zahid Fayyaz also congratulated all the forums of Minhaj-ul-Quran International for the inspiring work and their services, they render to the mission. He lauded specially Nazim-e-Aala, Dr. Raheeq Ahmad Abbasi for his inspiration and courage he extends to the worker and directs them at every step of the missionary life. Shaykh-ul-Islam presented his own ring to him and he himself set in his fingers. Shaykh-ul-Islam also presented a Sindhi Ajrak to Sheikh Zahid Fayyaz for his services he renders for the cause and mission of Minhaj-ul-Quran. Allama Ali Ghazanfar Kararvi, Ahmad Nawaz Anjum, and Dr. Ali Akbar Al-Azhari were also presented the Ajraks. 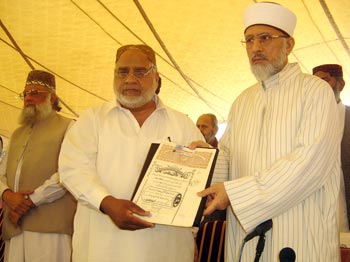 He also read the prescription written on the registry form to the people. He declared quite vividly that he had donated the mosque for the promotion of the thoughts and ideology of Imam Abu Hanifa and Ahlussunnah Waljamaat. Then he handed over that registry to Shaykh-ul-Islam. He also said in his speech that he was constructing another mosque and would present it to Minhaj-ul-Quran International on the occasion of birth of the Holy Prophet (SAW) next year. Shaykh-ul-Islam nominated him as member of Executive of Minhaj Welfare Society and ambassador of mutual understanding between Ahlussanah and Ahle Tasheeh for his financial sacrifice for Islam. He was also presented the certificate of life member of Minhaj-ul-Quran.

Shaykh-ul-Islam gave many titles to different central leaders of Minhaj-ul-Quran for their long term services for the cause of mission. Mr. Ahmad Nawaz Anjum was entitled as Durwaish-e-Tehreek, G M Malik, Anwar Akhtar Advocate, Allama Shahid Latif and Sajid Bhatti was given Nishan-e-Istaqamat. 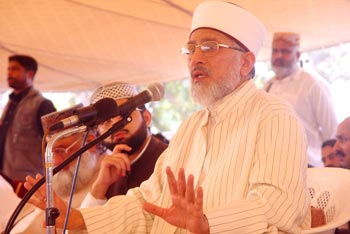 Waqas Ahmad Qadri, student at Sharia College invited Qibla Shaykh-ul-Islam for his final speech in his eloquent and unique style. All the people present at the occasion gave a warm welcome to their beloved leader. He said in his speech that Islam is the religion of peace and harmony and Minhaj-ul-Quran International is the movement working to promote peace and harmony round the globe in this century. Minhaj-ul-Quran International is fighting against terrorism, fundamentalism and extremism and striving hard to revive Islam and its noble values.

He told the people that the Holy Prophet (SAW) did not give us the Deen that fosters extremism and narrow-mindedness. The Holy Prophet (SAW) inspired and urged the people to generate comforts for mankind and preached the people to shun all what leads towards darkness or disharmony. He advised the workers of Minhaj-ul-Quran International to seek knowledge and practice that knowledge to maximum. He asked them to become paragon of knowledge and practice. He told that these are the major weapons of the Muslims. He also told them to promote peace and harmony in the society and concentrate on ideological, moral, and spiritual training. He also gave the task to workers to turn 12 big cites of Pakistan into cities of Peace. He ended the gathering raising his hands in the court of Allah Almighty he prayed for everyone round the globe for their perfect faith and belief and contented life. At the end, the participants were offered lunch. 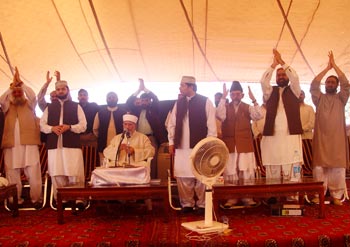 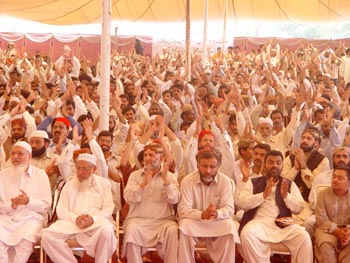 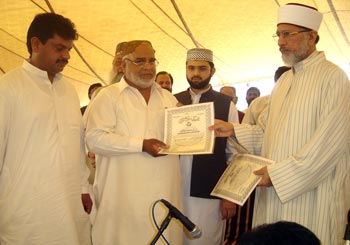 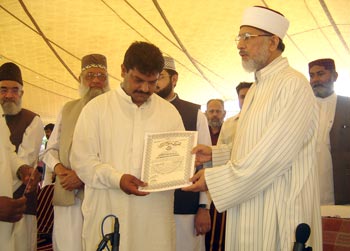