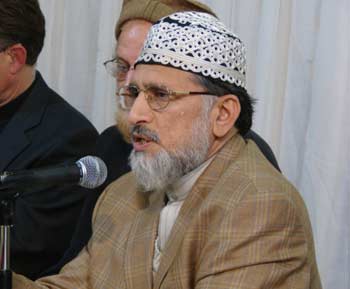 The event attended by the world renowned Islamic scholar Shaykh al-Islam Dr Muhammad Tahir al-Qadri who made an informal appearance at the event told the audience “religions and creed may differ in interpretation, scientists, engineers and specialists all of them may differ however there is diversity in interpretation”. Dr Tahir al-Qadri who on route to Canada arrived in the UK after completing a successful tour of the Indo-Pak Subcontinent said “the only thing can unite mankind and bring hearts together is the concept of unity of mankind”. 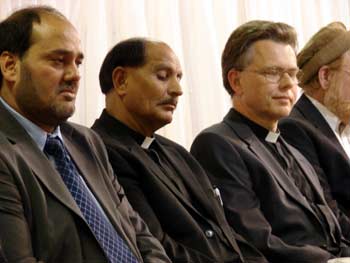 Dr Tahir al-Qadri is also the founder of the Minhaj ul Qur`an International Organisation told the audience “Islam never denies the authenticity of other religions. We (Muslims) believe in Moses, Jesus and the Bible. In fact the Ten Commandments and the Gospel of Jesus are mentioned in the Qur`an and furthermore Jesus is referred to as ‘the sign of god’ and ‘the word of God’ in the Qur`an. The story of the birth of Jesus is narrated in the Quran with a slight variation” He added, “there are differences in various religions just as there are differences in our race and colour. Similarly intelligence, character and conduct can vary there is multiplicity in them.” He ended “the basics of every religion are the same instead of looking at differences we should look at similarity. If we look at commonalities we can build a true peaceful global community. We should leave differences aside; we should look at what can bring man together” 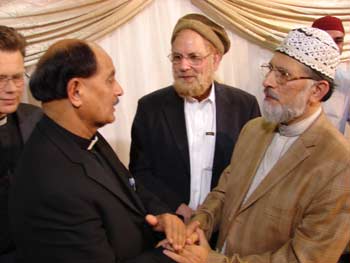 Speaking of the great figures of religions Dr Qadri said “All great personalities of all religions stressed to look at the good of individuals” “…and respect good aspects of man, his personality and to give due respect” speaking of the spiritual role of religion he said “mysticism is based on purification of the self and the soul and not to seek one another’s faults. This will create a peaceful side for everyone. The in depth reading of religious scriptures will reveal that every religion is based on the concept of love and tolerance.” His final words to listeners were not to test the patience of people shortly before dinner was served to all whom had gathered at the mosque during which Dr Qadri, Reverend Mossap, Father Barnabas and Cllr Dr Zulfiqar Ali conversed with another.

The event also celebrated the achievements of young Muslims of Newham who attended the pan-European event “The Guidance” an educational and residential retreat held earlier August this year at Heathrope Park in Oxfordshire. The four-day event promoted the Islamic teachings of peace, tolerance and harmony. Dr Zahid Iqbal chief organiser said “the programme had tremendous progress in eliminating extremist ideologies” and “it full fills certain aspects of Islam in the west bringing about a true reality of peace. We want to spread the message of love and peace and were not saying this in an apologetic manner this is essentially the true message of Islam”. Speaking of event’s huge success Dr Iqbal said “it has certainly made a mark on the map of Great Britain”. Organisers of “The Guidance” event said it had some 690 participants with a further few hundred applicants receiving apologies due to over subscription. 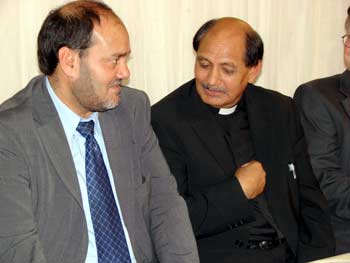 Councillor Dr Zulfiqar Ali chair of the Newham Alliance of Islamic Associations speaking to the mosque’s external affairs secretary Muhammad Asif Shakoor said, “This event was a unique opportunity to learn of the success the great ‘The Guidance’ programme. Minhaj ul Quran International deserves to be congratulated for leading our youth, giving them a sense of Islamic direction, preparing them for major challenges in life, particularly here in the west where our actions should demonstrate Islamic values of love, peace and harmony. May we have the strength to expand this programme across the United Kingdom.”

The mosques's extrenal affairs secretary Muhammad Asif Shakoor said "it is an honour for us tolisten toShaykh al-Islam Dr Tahir al-Qadri speak at our centre. It is a rare opportunity and one that certainly should not be missed"

This report is not governed by copyright regulations and may be utilised by the local press. 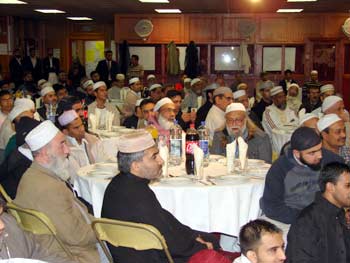