The Central Working Council (CWC) of Minhaj-ul-Qur`ān International (MQI) held a meeting in connection with Annual Itikaf, 2004 in Baghdad Town (Township) Lahore under the chairmanship of Col. (R) Fazal-e-Amim, acting Nazm-e-Ala. He said that, as a larger number of people for itikaf are expected this year, the administration has begun making arrangements in advance so that every trouble and inconvenience might be avoided. He formed a central committee and 26 sub-committees too, for finalizing all the matters related to itikaf. These sub-committees will submit their reports within a week to the central committee. It is worth mentioning here that the annual itikaf arranged by MQI is the second biggest in the world after haramayn sharifayn (i.e. the House of Allāh and the Mosque of the Holy Prophet PBUH). The following attended the meeting: Dr. Zahoor Ahmad Azhar, G.M.Malik, Squadron Leader (R) Abdul Aziz, Col. (R) Muhammad Ahmad, Haji Manzoor Husain Mashhadi, Rana Muhammad Idrees, Mumtaz Ahmad, Ahmad Nawaz Anjum, Syed Farhat Husain Shah, Sajid Bhatti, Muhammad Asif, Mohsin Khokhar and some other Nazims and Naib Nazims. 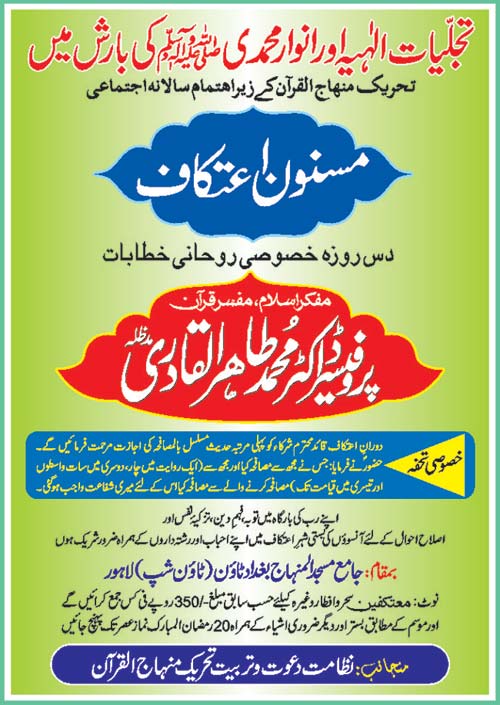