Today a campaign ‘Missing Pages’ is to be launched at the House of Lords by the Exploring Islam Foundation (EIF) to highlight the largely unknown stories of solidarity between Jews and Muslims especially the accounts of Muslims sheltering Jews during WWII.

A Leading Muslim organisation Minhaj-ul-Quran International (MQI) fully endorses the campaign to rediscover the close links between Muslim and Jews and to foster better relations with the Jewish community. MQI has been at the forefront in promoting interfaith dialogue, peace and tolerance amongst different world faiths.

Shaykh-ul-Islam Dr Muhammad Tahir-ul-Qadri, founder of Minhaj-ul-Quran International and one of the leading Islamic scholars of the 21st century said “I, along with members of Minhaj-ul-Quran International worldwide, wholeheartedly endorse this valuable initiative on the part of Exploring Islam Foundation to rediscover the close links between these two communities, and help to foster better relations between them in the future, something which is an urgent and essential need of our time. I congratulate the Exploring Islam Foundation for embarking upon this project, and I pray for their success.”

He added “Jews and Muslims share a common heritage as Abrahamic religions, and history bears witness to the long record of peaceful co-existence and cooperation between adherents of these two religions, which at certain times, such as in medieval Spain, made a positive and lasting impact on the world.”

Shahid Mursaleen, spokesman of Minhaj-ul-Quran UK said “We welcome this important campaign which is significant and timely and promotes close relations between two of the world's leading faiths. Our aim is to present the true teachings of Islam in order to encourage better understanding of Islam and its relations with other faiths.”

“This pioneering initiative will help us to understand that as Abrahamic religions, Jews and Muslims share a common heritage and it is our duty to rediscover our historic links for a peaceful and tolerant British society.” 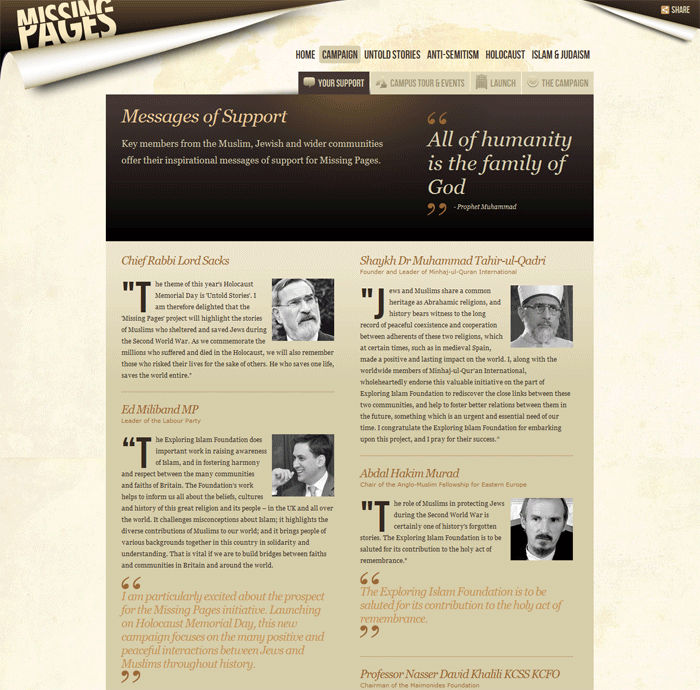