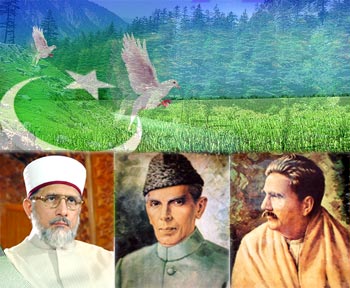 The 25th of December is the birthday of Quaid-e-Azam Muhammad Ali Jinnah, the founding father of Pakistan and a great statesman of his times. I congratulate the entire Pakistani nation and the members of the Pakistani community living abroad on this festive occasion.

The establishment of Pakistan owes its existence to the dedicated and untiring struggle of the Quaid-e-Azam he waged for the Muslims of the sub-continent. Pitted against the combined opposition of the ruling British and the Indian National Congress, the great Quaid risked his personal comfort nay his health in his struggle to attain Pakistan on the basis of universal right to self-determination. His is a story of iron-like will power and a potency of an idea that is Pakistan. At a time when the Muslims of the sub-continent were in disarray, he ignited hope in them and marshaled the unwieldy crowds into a coherent nation, which was ready to sacrifice anything to realize the dream of a separate homeland under the dynamic leadership of the Quaid-e-Azam.

Human history does not offer any other parallel example whereby a leader carved out a new state solely through constitutional means within such a short span of time. The Quaid-e-Azam is no doubt a towering personality among his contemporaries, thanks to his single-minded pursuit of the dream of Allama Muhammad Iqbal into reality, which altered the course of history of the sub-continent.

Tribute paid to Quaid-e-Azam by the renowned historian Stanley Walport rightly sums up the achievements of the Quaid-e-Azam when he said, “Few individuals significantly alter the course of history. Fewer still modify the map of the world. Hardly anyone can be credited with creating a nation-state. Mohammad Ali Jinnah did all three." Lord Mountbatten said: "Sincerity, honesty and integrity marked the man. Faith and indomitable will were his bulwarks."

While celebrating the birthday of the Quaid-e-Azam, the nation must reflect upon his ideals and teachings and make an attempt to introspect whether we acted upon his teachings or drifted away from the path he set out for us.

December 25 is also an occasion for national appraisal. Despite the passage of 64 years, the country remains mired in political instability with a chosen ruling elite exploiting the national resources to the detriment of the collective interests of majority of the Pakistanis. The gulf between haves and have-nots has widened to an unimaginable extent. Economic chaos and social strife has marked Pakistan. Terrorism and extremism have rocked the foundations of the country which was established as a moderate, welfare Islamic state.

A corrupt and exploitative system has been imposed upon the people in the name of democracy, which allows a few powerful families to hijack the future of the 180 million strong nation. This system, in my view, is the worst enemy of the people, which has stunted the growth of Pakistan along the ideals advanced by the founding fathers of Pakistan. As long as this corrupt electoral system stays intact, Pakistan cannot become the kind of a country that the Quaid-e-Azam wanted it to be.

Instead of sitting idle and lamenting the poor state of affairs in which we are stuck up, it is about time everyone of us rose up and played his/her part in changing the system through peaceful means. Minah-ul-Quran International and Pakistan Awami Tehreek has launched a countrywide public awareness campaign which seeks to awaken people and organize them in a bid to change the electoral system.

On the occasion of 25th of December, let us vow to make Pakistan a truly modern, progressive, moderate, welfare Islamic state in accordance with the vision of the Quaid-e-Azam.