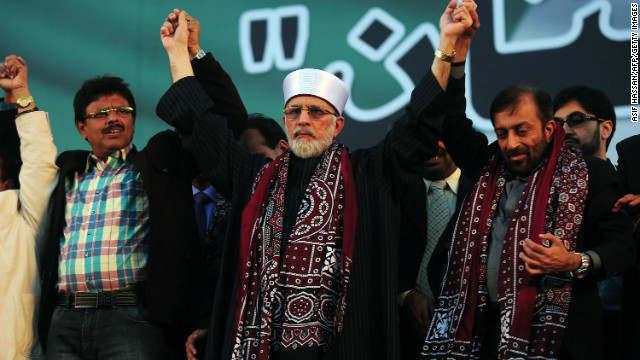 The bold pronouncement thrust Qadri into headlines worldwide and led to an invitation to speak at the prestigious World Economic Forum and United States Institute for Peace.

Two years on, the religious cleric has resurfaced in Pakistan, demanding free and fair elections, after spending the last six years living in Canada.

Qadri has come a long way since his time as a parliamentarian during General Pervez Musharraf's regime in the early 2000s.

After promoting his agenda from abroad -- speaking out in videos and books -- he is now back in the political spotlight in his home country, calling for a caretaker administration to take the government's place and carry out election reforms ahead of an upcoming vote.

According to Qadri, the composition of the caretaker government should be decided with the input of the judiciary and the military.

But in a country with a history of military coups, Qadri's mention of the army in the electoral process set off alarm bells with the current government and opposition who quickly reassured the Pakistani people that nothing would stand in the way of timely elections and the democratic process.

Some Pakistanis have suggested Qadri is working on behalf of the military -- an allegation he denies. He maintains that he is working only to ensure a corruption-free electoral process.

Qadri threatened that unless his election reform demands were met by Thursday, he would stage a "Million Man March" to the capital, paralyzing the city with thousands of supporters.

"We will not succumb to these illegal demands," Senator Rehman Malik, Pakistan's Interior Minister told media Thursday, in anticipation of the protest, which is expected to arrive in Islamabad on Monday.

Malik said he would not allow the rally to enter downtown Islamabad as it posed a security risk and would disrupt business operations in the city; he said the Pakistani government had cordoned off sensitive areas of Islamabad.

"The residents of Islamabad are scared that mobs will raid their houses and there will be violence and murder," Malik said. "I will hold Qadri personally responsible if there is any violence or murders during this rally."

Malik announced last week that he had intercepted intelligence that the Pakistan Taliban was planning to attack the gathering on Monday.

Despite criticism from the government, Qadri seems intent on marching to the capital, spending millions on prime time television advertising to urge others to join him.

"We are expecting one to two million people who will join the march", Shahid Mursaleen, spokesman for Tahir ul Qadri, told CNN.

"We plan on removing the barricades put up by the government and we will remain in the city whether it is [for] two days or 30 days, until our demands are met," Mursaleen said.

However, just two days before the planned march on Islamabad, the only political party supporting Qadri's march, the Mutahida Qaumi Movement (MQM), a coalition partner in the current government, pulled its support.

Supporters maintain that Qadri is only trying to make a positive change in a country that is in need of help.

They point to his welfare organization, called Minhaj ul Quran, which promotes "true Islamic teachings." According to its website, it has up to 280,000 members worldwide and works to build madrassahs around the country to teach young children the Quran.

The "Million Man March," which is expected to reach Islamabad on Monday, could be a game changer, analysts say, because it could have a major impact on the democratic process -- but whether the outcome of that would be positive or negative at this crucial time for Pakistani politics is still unclear.