Corruption, Al Qaeda, terrorism - all the things that the nuclear-armed Pakistan has made a sick and dangerous country, he wants to sweep away - the preacher Tahir-ul-Qadri. But people puzzle before the election: Who is this man? What it stands for? A visit to his headquarters.

Men, women, children, as far as the eye can see. Tens of thousands are blocking the main road of Pakistan's capital Islamabad. Doctors and workers camp on the road directory named after the founding father Jinnah Avenue. It took discontented 38 hours to parade the way there. The hero of the disappointed: an Islamic preacher. These pictures were seen in mid-January through television in the world. In many western living rooms, they left a trembling. Tahir-ul-Qadri, with a trimmed white beard, subdued gold-rimmed glasses spoke powerfully for hours - from the bulletproof glass containers and promised his followers in the nuclear state a revolution that would sweep away the corrupt political elite, the "robbers, thieves and gangsters" who do nothing for the constant power cuts and rising prices.

He would enforce a system of voting, which would bring capable people to power. Recently, a political Nobody, now a rising star. Not millions followed him, as he had announced, but the demonstration was enough to spread unrest.

Only a few weeks before the moderately appearing Islamic religious leaders and lawyer Tahir-ul-Qadri returned from Canada, a few months before the elections, in which for the first time in Pakistan's history to a civilian government after a full legislature again be selected. Now the term officially ends, then as per the Constitution, a transitional government would takeover. Tomorrow, Sunday wants "the Doctor", as the Pakistanis call Qadri to proclaim the motto "elections or revolution" in Islamabad's twin city Rawalpindi, whether his Popular Movement of Pakistan (PAT) competes in the elections.

But still most are puzzled, who is Tahir-ul-Qadri. Why does the man interfere who has his Islamic organization, founded in 1981, Minhaj-ul-Quran works in 90 countries and its training projects praises, whose party is yet not very important right now in politics? Who helped him? The army and the powerful intelligence service, without whose good will it is hard to imagine? Or the Americans have paid the expensive campaign, perhaps the Brits?

"This is all a lie," the preacher says in his headquarters in East Pakistan Lahore. "Neither of which have funded or have any connection with me." He led "an honest and pure democratic struggle". For eight years, his supporters donated a percentage of their income, hundreds of thousands of people. "Some have sold their jewellery or a house, and so did my wife and my two daughters. People from Japan, Europe, the Middle East, here come together millions of rupees. "Every day people are coming to him, who wanted to run as candidates for him.

Who ever wants to meet Tahir-ul-Qadri has to set aside enough time. Although he insists - unlike so many others in the country - on precise date, the first it is necessary to pass through concrete bollards, barriers and checks which his house and large parts of the area are protected. The shoes remain outside the house, inside Qadri receives on a chair with bolsters and footstool - the 62-year-old, says a staff member. Before we start, Wiring his own camera the crew chief in a jacket over the traditional long shirt and black Muslim cap. "As a control," his media manager says, smiling as well as the security chief on the sofas takes place. "If we had not the guards, the terrorists would bomb my house tomorrow," said Qadri.

Since 2010 he had denounced in a fatwa against terrorism and suicide bombers as un-Islamic Taliban made enemies like Al Qaeda, he had not been in the country. But "Pakistan is a threat to our own country, the neighbors and residents become", that was the reason why, "I now begin the movement". He had given them the entire legislative period, but "the so-called elected government was not five years in a position to wipe out the terrorists, the Parliament was not able to make laws on terror".

That had to change. To do this it requires other politicians who pay the taxes that would have a program for education, health, social and security system. "In Pakistan, determine the three M: money, might, manipulation (money, power, manipulation)," he rants. To change that, the electoral system must be changed. But recognized that the major parties are not interested - but some worked together with banned militant parties, he says, and pick leaves a compromising photo with a politician of the Muslim League. Qadri explains about the cooperation with supporters of terrorists by these politicians. There is an alliance with these people in the constituencies to bring votes for "50 to 60 seats" in parliament, in return, the extremists receive "for five years, shelter, financial assistance and jobs for their people," like in the police. As he himself wants to change all that and pay for his policy, he leaves open. He prefers to talk about the orphanages, schools and colleges of his organization.

Qadri is making every effort to convey the image of a rational man, a clergyman, who represents a form of Islam that can live with the West also. It is no coincidence beside him a globe and a shining image of the mosque of Mashhad in Iran. Look, the Sunni, who is closely associated with the Shiites. A powerful message at a time when the religious zealots incite people to shake attacks on the Shiite minority, the country. Understanding instead of hardening between believers doing emergency in Pakistan. Only last weekend, a mob of 3,000 people pillaged in a Christian neighbourhood of Lahore. Once again, apparently abused a Muslim businessman, the blasphemy law for its own interests. Introduced under dictator Zia ul Haq law represents attacks on the Prophet is punishable in recent times, however, were so often dubious processes intently. Many Pakistanis would like to change the law, who openly says that, but he lives dangerously. A governor has been shot.

Critics accuse Qadri, even if he was playing wrong. The frank words for his courage of several international awards analyst Najam Sethi does not think much of him. "A revolution is not there be in Pakistan, there is no consensus." The 64-year-old journalist was detained under various rulers, the actors knows like no other. He considers the political melee situation as impenetrable. It is currently impossible to predict whether there will ever be elections. Sethi lives and works because of threats from the Taliban, al Qaeda, and in a secret, though quite comfortable fort behind high walls, to leave his country, he will not. Even if Qadri pretends otherwise, "he does not want elections, he wants to delay it," Sethi believes. "For he will never win elections."

Even the deputy Sardar Ayaz Sadiq believes Qadri had no serious ambitions. He wanted to possibly test the situation, says the man with a gray beard and a green tank top, "Qadri is completely contradictory." This is the blasphemy law so he preach in Pakistan and other views than abroad. Moreover, he says, before he leaves, a member of his constituency saw Qadri with former dictator Pervez Musharraf and the powerful former intelligence chief General Ahmad Pasha.

Many resent Qadri that he with the same verve also represents the opposite of what he has just said. In January, he staged an agreement with the government, the acclaimed concessions were marginal. Observers criticize his show had prevented changes to the electoral law, which were already on the way. Instead Qadri himself stands in the center.

For example, the dual citizenship. As he also has a Canadian passport, he cannot even contest. Pakistanis may indeed have two nationalities, but not MPs. "I will lead the movement," Qadri announces confidently, without saying what that means. Party leader is officially a man named Raheeq Abassi. Qadri has no intention to give the Canadian passport, "This is not a crime. Why should I, if I do not participate in the election? "

Meanwhile his team tinkering with the image of the good people. "Everything was peaceful, for four days, which has never happened before", they swarm the January event. Photographer Mahmood Qazi, a compact man in jeans and a fleece pullover sighted, in an office pictures for the next campaign. Just down the hall, they straighten a great media center. Nine screens flicker in the corner, on seven run national broadcaster, a young man wrote. You follow the news closely, want everything to react immediately. The press officer may make only to 22 clock closing time, when the proofs newspapers. "The large LCD screens get there," said media manager Raza Khan. The image is important. That the Liberals, has nothing in common with zealous mullahs.

At the College of Sharia Qadris Minhaj-ul-Quran is enough for today, a couple of guys in the yard, according to Turkish model they wear red caps. Syed Booali is 17 and shy. "I have courses in Islamic law, English, Urdu and economy," he says. Should read: The spiritual and secular education go hand in hand. From the property diagonally across the yard young men craning their necks curiously.

Before the bright turquoise-green mosque (they also have a Turkish counterpart) rush two veiled women across the marble courtyard. Raza Khan shines: "We have our own women's wing." An own wings? "The liberal for us," says Khan, while he stays behind. Words mean in Western ears sometimes something other than the Muslim context. Tahir-ul-Qadri has not just said that women have the same rights as men, they could be involved in all areas equally? And they were also in the Koran properly dressed when they wear a headscarf, should therefore not fear disadvantages.

Equally entitled to say here, but not together. Men may not be in the women's field, even if there are work rooms. Nestle snugly inside the small office, in each there is a picture of the Master - all women wear a tight around the hair gezurrtes cloth, some are completely obscured, only a slit for the eyes remains. "Until I came here three years ago, I have not worn Abyia" says the IT student Shakira Chaudhry and tugs at calf-length black robe."But now it's just part of. We think as Muslims we need to do, not because someone is forcing us to "This starts the 27 year old is a eulogy to Qadri, it sounds like a cult." He's the only one who proclaims the true message of Islam, the message of women's rights.Women must learn, women are allowed to move, we have leadership qualities. "In Qadris close Advisers however appear only men.

Despite all the contradictions - Qadris attraction seems to be unbroken. To the online pages of the newspapers, his name is always in the "Top Topics. The advertising manager Muhammad Ali from Lahore, the explanation is clear: People come because they want to implore change that have also ex-cricket star Imran Khan and his party managed. "You have people taken from their homes, who have never voted before." He was like many other Pakistanis "concerned about our country and ourselves." And then adds Ali: "We are a nation in search of a leader." 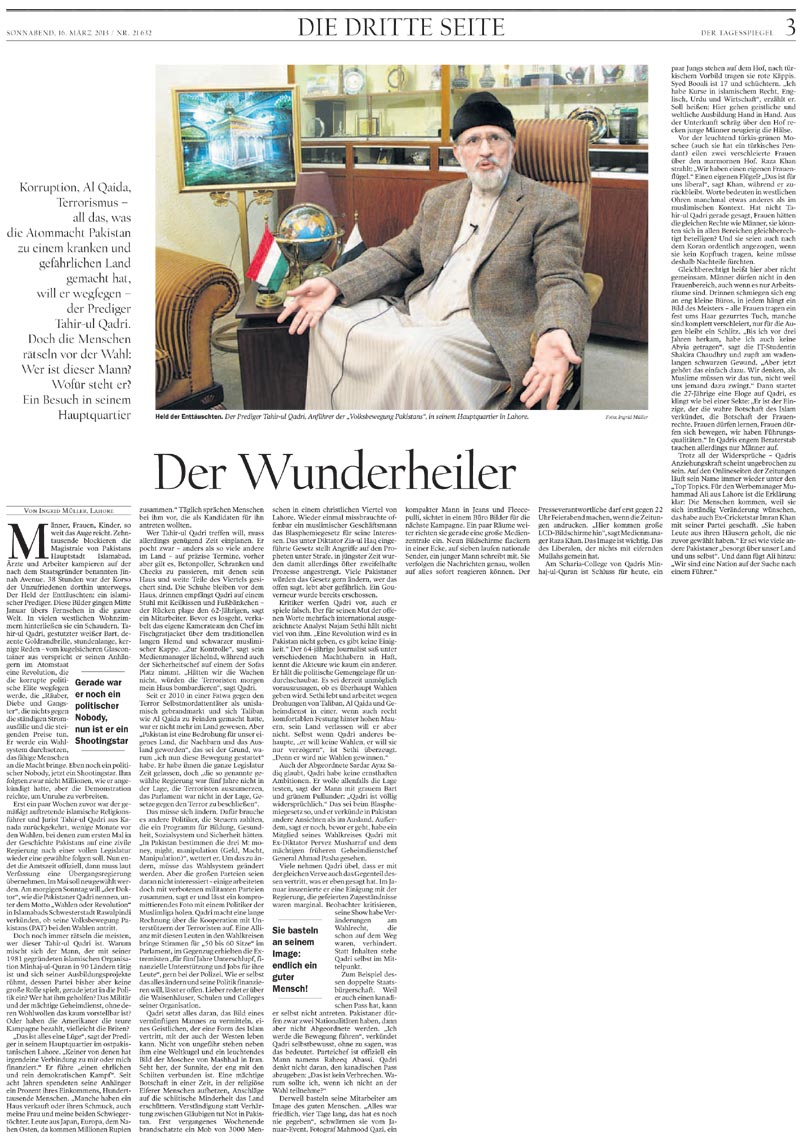