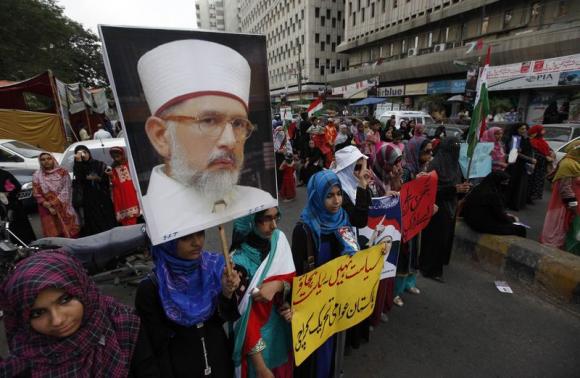 Female supporters of Tahirul Qadri, a Sufi cleric and the leader of the Awami Tehreek political party, hold his portrait during a protest in Karachi, condemning Tuesday's deaths of their party's workers in Lahore June 19, 2014.

(Reuters) - A prominent Pakistani cleric, who is due to return to his homeland on Monday, has threatened to lead mass protests against the government as part of his plan to stage a peaceful "revolution" to oust Prime Minister Nawaz Sharif.

The preacher, Tahirul Qadri, is a divisive figure in Pakistan where he made headlines last year when he led mass rallies against the government. He is usually based in Canada.

His sudden ascent to prominence has prompted speculation that the military, which ruled Pakistan for decades, may be using him as a proxy in its efforts to sideline the civilian government.

In a Twitter post issued on the eve of his comeback, Qadri said: "I am coming to support our Pak(istani) army in their fight against militants."

Using the hashtag #RiseUpWithDrQadri, another post said: "Now it's the duty of the poor people of Pakistan to come out and bring a revolution."

Reflecting the government's nervousness about his return, authorities have banned public gatherings in the city of Rawalpindi where the main international airport is located, local media reported. Qadri is due to land there at 7 a.m. (0200 GMT) on Monday.

Television channels also reported that the authorities might block mobile phone services in Rawalpindi and Islamabad, a tactic usually employed to prevent militants from staging attacks or protesters from coordinating their actions.

At least eight people including a policeman were killed in the city of Lahore last week when protesters clashed with police in a standoff over Qadri, who champions religious tolerance and once issued a fatwa against the Taliban.

Earlier, his Pakistan Awami Tehreek party said in a statement his flight might be diverted to Lahore or Sialkot from Islamabad, but that could not be independently confirmed.

"I am coming to Pakistan to eliminate terrorism, bring peace, true democracy and social economic justice to the poor," Qadri said before boarding his flight in London.

His comeback comes at an uneasy time in Pakistan after the army announced an all-out offensive against militants on the Afghan border, triggering a wave of refugees from the region. Sharif has long been opposed to military action and the decision to send troops there was seen as a major win for the army.

Qadri played a prominent role in supporting former army chief and president Pervez Musharraf after he seized power in a coup in 1999, toppling Sharif who was in power at the time.

Qadri served in the national assembly under Musharraf before moving to Canada in 2006, apparently disillusioned by his former ally.