Determined to go to any extent for justice in Model Town case: Dr Hassan Mohi-ud-Din Qadri 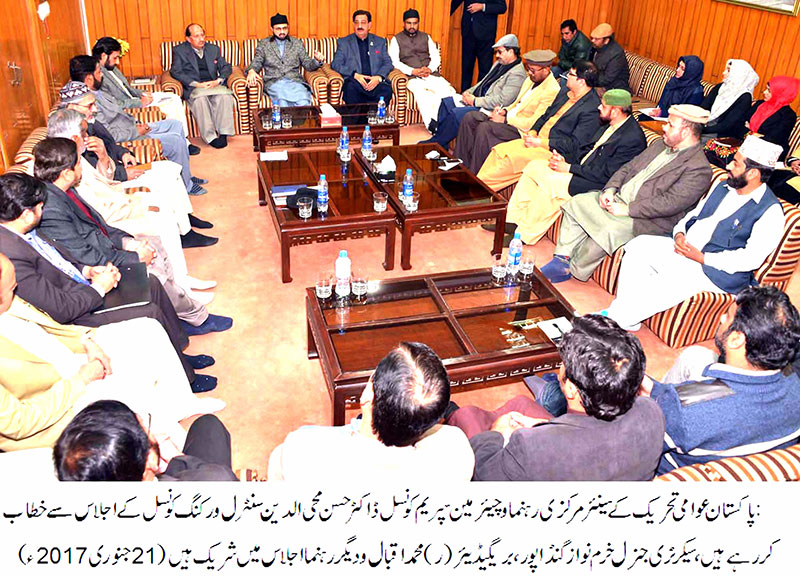 A hurriedly called meeting of PAT Central Working Council was held here at the central secretariat of the party with Supreme Council Chairman Dr Hassan Mohi-ud-Din Qadri in the chair.

Addressing the meeting, Dr Hassan said that the rulers will not be able to get away from the Qisas. He said that they can maneuver their way out of the Panama leaks but not from Model Town tragedy. He said that the government is a hurdle in the way of justice and our efforts to seek it continue for last two years, adding that we will go to any extent to achieve the objective of justice.

The Chairman Supreme Council said that the rulers want to get away by offering the sacrifice of goats but unless real perpetrators of the Model Town tragedy are brought to justice, our struggle will continue. He said that we have irrefutable proofs as to who is responsible for the massacre in Model Town.

The PAT lawyers briefed the meeting about the status of the private complaint being heard by an antiterrorism court in Lahore. They said that 56 witnesses have recorded their statements and many important videos have been presented in the court. They further informed that arguments are being made and the next hearing of the case will take place on January 25.

A resolution adopted in the meeting asked the government to publish the Justice Baqir Najfi Commission report.