Families of Model Town martyrs celebrate birthday of their leader 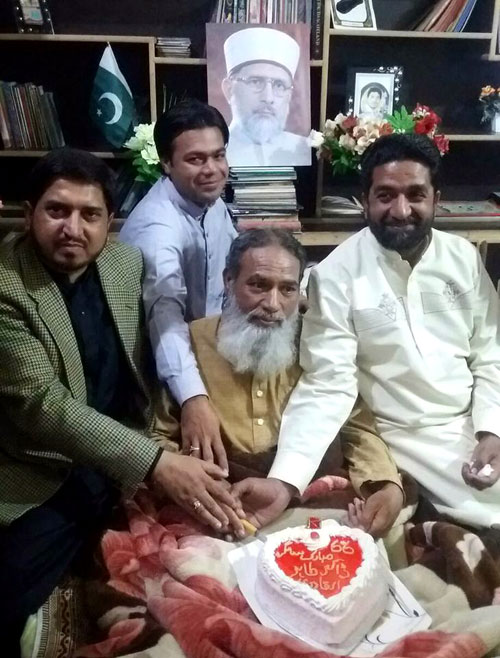 The families of martyrs of the Model Town tragedy cut the cake marking the 66th birthday of Dr Muhammad Tahir-ul-Qadri in their homes and arranged prayers’ ceremonies. Special Duas were made for the martyrs of Model Town as well as all those who lost their lives in the terrorism-related incidents across the country. Cakes were cut in these ceremonies that were held with utmost simplicity. Prayers were also made for good health and long life of Shaykh-ul-Islam Dr Muhammad Tahir-ul-Qadri.

Talking to the families of the martyrs, Hafiz Ghulam Farid said that in order to eliminate terrorism and militancy from the country, the best recipe is the initiation of the army operation in all the four provinces. He said that dialogue is held with human beings, not the beasts. He asked the workers to reach out to the people with Dr Tahir-ul-Qadri’s message of peace and love, adding that the masses should be made aware of the fact that the PAT will not budge an inch from the demand of Qisas in the Model Town tragedy. He said that every kind of terrorism will come to an end when an effective and efficient justice system is established in the country that punishes the oppressor irrespective of his status.

Hafiz Ghulam Farid said that the vision of peace and progress of Dr Tahir-ul-Qadri is the source of confidence for the Muslims around the world. He said that the people should extend their support to Dr Tahir-ul-Qadri for his agenda of peace and leadership qualities as he has the capability to turn around the Muslim world. He said that Dr Qadri is such a leader who respects dissent and is giving practical shape to his promise of intellectual and scholarly fight against terrorism.

The PAT Lahore leader said that the present rulers are pushing the nation into stone’s age. He said that there are many problems including terrorism, energy crisis and poor economy but the rulers have different priorities. He said that the martyrs of Model Town are our pride, adding that the children and families of the martyrs proved by rejecting the lucrative offers of millions that blood of the martyrs cannot be bought. He said that Dr Tahir-ul-Qadri has imparted lesson of peace and love to his workers, stating that neither fear nor greed can stop the way of their peaceful struggle aimed at changing the system.