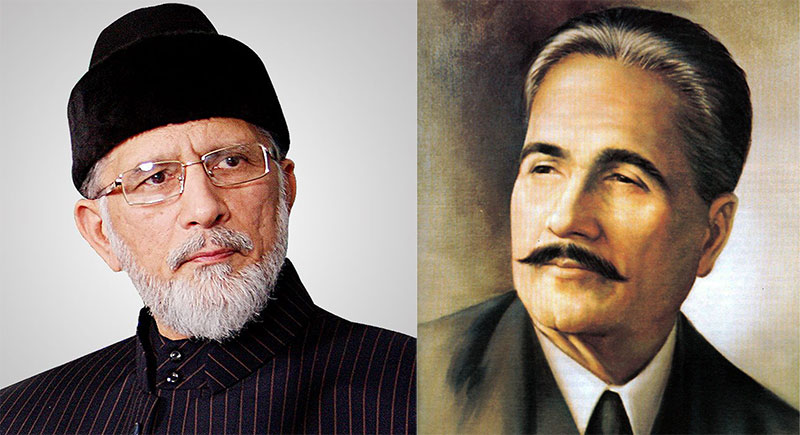 In his message on the 143rd birth anniversary of Allama Dr Muhammad Iqbal, the poet of the East, Shaykh-ul-Islam Dr Muhammad Tahir-ul-Qadri has said that the Holy Quran, the Holy Prophet (pbuh), and Maulana Rum are three fountainheads of Iqbal's thought. He said that Allama has drawn his philosophy of education, politics, philosophy of reconstruction of religious thought and self from these sources. He said considering Iqbal as a poet only goes against the understanding of his multi-dimensional personality.

Dr Tahir-ul-Qadri said that Allama Iqbal used the vehicle of poetry to convey a larger message to humanity. His message was that of self-gnosis, self-exploration and deep knowledge; that of ever-living life, understanding of the Holy Quran and a strong bond with the Prophet of Islam (pbuh). He said among the four people who are being widely read, researched and commented upon Imam Ghazali, Ibn Al-‘Arabi, Rumi and Iqbal. He said the Western world remains curious to know about these four personalities, for they possess the solution to the raging problems of the world.

Dr Tahir-ul-Qadri said the wise-sayings of Hakim-ul-Ummat help us decode and understand the real message of Islam. He said Allama Iqbal awakened 'self' in Muslims of the sub-continent to get rid of slavery, and achieve independence, adding that his concept of 'self' is a panacea to get rid of slavery in every form and shape. He said there is dire need of understanding the message and philosophy of Iqbal to deal with the contemporary challenges.

Dr Qadri said that Iqbal's thoughts and ideology lighted up a candle of hope and courage that blazed the path toward the destination. He asked the youth to make themselves well conversant with the broad message and teachings of Allama Iqbal and remould their lives accordingly. He said this sage predicted the problems decades ago that humanity is facing today. He said Iqbal's thought is a beacon of light for the elimination of sectarianism and extremism. He said we can realise the dream of making Pakistan a welfare Islamic state only when we act upon the teachings of its founding fathers such as the Quaid-i-Azam and Allama Iqbal.