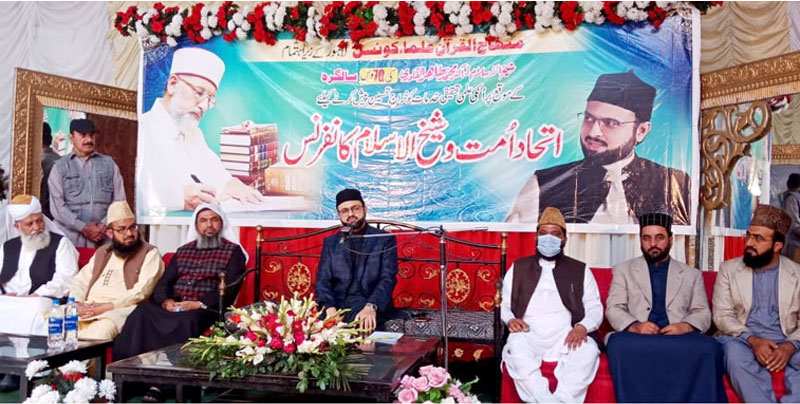 Addressing the "Ittihad-e-Ummat & Shaykh-ul-Islam Conference" held under the banner of Minhaj-ul-Quran Ulama Council, Chairman MQI Supreme Council Dr Hassan Mohi-ud-Din Qadri has said that MQI rendered great services in the fields of research and scholarship for the elimination of extremism. We have always made efforts to forge unity within different schools of thought in light of the teachings of the Holy Quran. He said that the protection of Islamic beliefs, the promotion of knowledge and research, and unity amongst Muslims are distinguishing features of MQI. He said that Shaykh-ul-Islam took on the mischief of "Takfeeriyat" and safeguarded the faith of the people by uprooting this scourge, adding that he is the strong, credible, and powerful voice of the Hanafi school of thought in the present age. He said that the efforts made by Dr Tahir-ul-Qadri for the unity of Ummah constitute a golden chapter in the annals of history. He said hundreds of books that he has written on a variety of topics are the source of the promotion of interfaith harmony.

Dr Hassan Mohi-ud-Din Qadri said that Muslim Umma needs mutual love and unity today. He said conservatism has always led to problems, stating that generosity of heart and think are the building blocks for the establishment of a peaceful society. He said that we need to get out of our petty and narrow differences and focus our attention on promoting commonness of thought.

Allama Sayyid Ziaullah Shah Bukhari said in his speech that Muslims are one body and if one part of the body feels pain, the whole body experiences the same pain. He said that a Muslim should feel the suffering and pain of his co-religionists in the same way. He said that if we are not moved by the sight of hardships, sufferings, and pain of our brothers and sisters, then we should seriously worry about the state of our faith. He said that chosen people of Allah spread the light of knowledge in the dark age of mischiefs and take the community out of misguidance.

Allama Mufti Shabbir Anjum said in his address that Dr Tahir-ul-Qadri addressed the misconceptions about Islam found in the western world in their own language. He said that the Quranic Encyclopedia that consists of 8 volumes is a great service to the Holy Book. He said if anyone has defended the honour and prestige of the Prophet's household in the present age, it is certainly Dr Tahir-ul-Qadri. He said that MQI, an institution set up by Dr Qadri, is spreading the Quranic thought, adding that the journey of MQI is the journey of knowledge, research, and peace.

Allama Mir Asif Akbar said that Dr Tahir-ul-Qadri has rendered great service for the revivalism of Islamic teachings. He said that his work and services are a matter of pride for the Ahle Sunnat Wal Jamaat.