Arms cannot be taken up against an Islamic state: Dr Muhammad Tahir-ul-Qadri 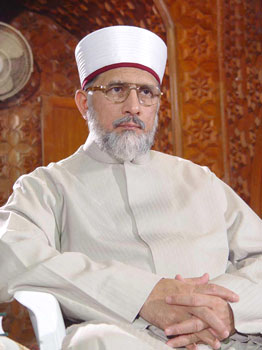 Islam is a religion of peace, which has nothing to do with terrorism or extremism. No one whether an individual or a group can be allowed in an Islamic state to initiate armed struggle against the Muslims and raise the banner of revolt against an Islamic state. These views were expressed by Dr Muhammad Tahir-ul-Qadri, founder and patron-in-chief of Minhaj-ul-Quran International, in a telephonic speech from Canada at a special prayer gathering held for relief, rehabilitation and reconstruction of affectees of Swat in Lahore yesterday. He said that such people who challenge the writ of Islamic state and destroy public order are wrong and rebels in the light of the teachings of Prophetic traditions. These people should seek Allah’s forgiveness.

Dr Muhammad Tahir-ul-Qadri said that no one could be allowed to take up arms against a government unless its Muslim rulers close down Mosques, ban prayers and violate pillars of Islam openly. The rulers of the day are Muslims. There are both sinful and pious people present among them. The Constitution of Pakistan has prescribed a way to replace selfish and bad rulers with the pious ones through a system of elections. Masses get the opportunity to do so after every five years but alas, people vote such people into power on the election day whom they curse all along five years. That is why the fate of the country cannot change. The set of rulers who have been ruling this nation are in accordance with actions and ideas of people at large. Hundreds of people belonging to all walks of life including women and children participated in the Prayer Night. The distinguished among the included Sheikh Zahid Fayyaz, Miskin Faiz-ur-Rehman Durrrani, Allama Farhat Hussain Shah, actor Ferdous Jamal, Irshad Tahir, Malik Yameen Awan, Mufti Abdul Qayyum Hazarvi, Akhtar Qureshi, Qari Syed Sadaqat Ali, Hameed-ud-Din al-Mashriqi, Raja Zahid, Jawad Hamid, Sajid Bahtti, Ahmad Nawaz Anjum, Muhammad Lateef Madni, Mian Zahid Islam, MPA Ijaz Khan, Chaudhry Akhtar Rasool, Fatima Mashahidhi, Sumaria Rafaqat, Aneela Doager. The programme concluded with the special Dua led by Dr Muhammad Tahir-ul-Qadri about the return of peace and early rehabilitation of affectees of Swat. 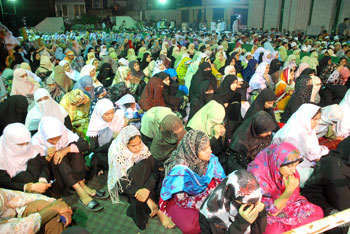 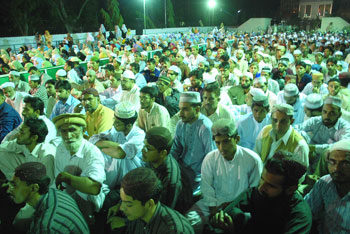