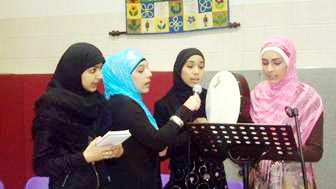 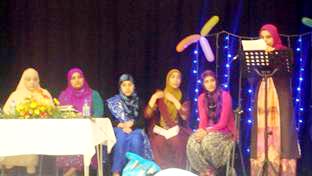 In the blessed month of Mawlid-un-Nabi (blessings and peace be upon him) the Women League and Muslim Youth League collectively organised six conferences across greater Glasgow. The programmes were held in the following areas:

All the programmes commenced with the beautiful recitation of the Holy Quran by Sister Asifa who also translated the Sura, so that the audience did not only enjoy the recitation but understand the beautiful meanings of Divine words revealed upon the Holy Prophet (blessings and peace be upon him) by Allah (SWT). 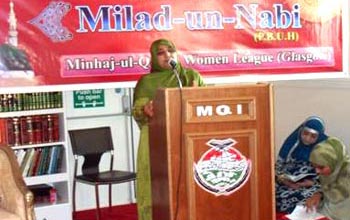 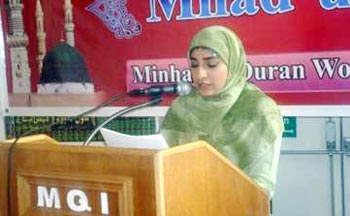 This was then followed on by hymns and euologies of the Beloved Prophet (blessings and peace be upon him). Many sisters took part in this sacred ritual throughout the various conferences, namely Sister Ruhi, Sister Yasmeen and also the young members of Minhaj Naat Council amongst many others. The Minhaj Naat Council consisting of four young sisters ensured the gatherings were uplifted with the moving Nasheeds of the Holy Prophet (blessings and peace be upon him) alongside the ‘duff’, this was thoroughly enjoyed by audience of all ages. 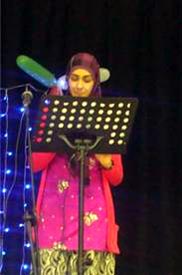 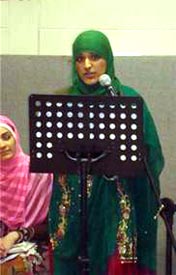 The programmes catered to both the youth and the older generation. This balance was met by having a talk both in English and Urdu. Many youth sisters were encouraged to deliver speeches on various topics at different locations in order to give them experience and gain confidence in delivering a speech in front of a large audience.

In order to create awareness of Minhaj Welfare Foundation (MWF) and to promote the MQI to the Great Wall of China, the following sisters participated in different conferences; Humma Majid, Habeeba Hasghar, Naeeema Hafeez, Ambreen Mehmood and Humaira Shabir delivered a brief introduction on MWF's aims and objectives. This covered previous and ongoing activities carried out by MWF. Some of the major projects were also discussed in depth which consisted of the Agosh Project, Collective Marriages as well as various Educational Projects. MWF’s four major categories were highlighted, which included education, health-care, emergency aid and welfare support.

The talk delivered in Rutherglen by Sister Ambreen covered the rights of women given by Allah (SWT) and the Holy Prophet (blessings and peace be upon him). Ambreen explained that Islam recognized women as human beings, 1500 years ago, without women having to struggle for this, whereas the West only gave this recognition early in 20th century, with women struggling hard for this right! She further explained that women of Islam were highly educated, many of which were ambassadors and diplomats. The wife of the Holy Prophet (blessings and peace be upon him), Syeda Aisha (RA) was not only a Muhadith (authority on Ahadith), but had great knowledge on history as well as poetry.

Ambreen conducted her talk in Urdu language for the second event in Charing Cross. Her references were taken from great scholars such as Imam Ibn Atta and Iman Jaffar-as-Sadiq. Her talk concentrated on the following verse of the Holy Quran:

This verse basically means that “O Beloved We have elevated your remembrance for your sake.” This is further elaborated by Imam Ibne Atta that in fact Allah (SWT) states that if one remembers the Holy Prophet (blessings and peace be upon him) then that person is also remembering Allah Almighty simultaneously. She further explained that Scholars stated that on the Day of Judgment when the book of deeds would be accounted, any individual that recites 'Ya Muhammad' would also be calling Ya Allah. A point to note here is that Allah (SWT) doesn't state that if one remembers Him that the name of the Holy Prophet (blessings and peace be upon him) would appear next to His. This was done so that those who do not hold love for the Holy Prophet (blessings and peace be upon him) will not be able to recite only “Ya Allah” but will have to recite “Ya Muhammad” to gain this dual blessing. 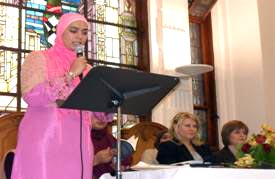 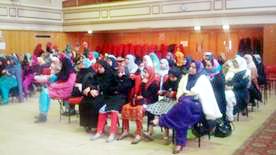 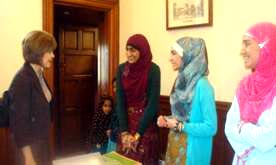 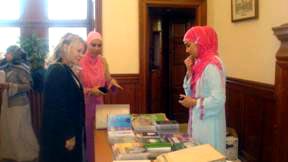 The Urdu talk delivered by Sister Tasneem discussed that Allah (SWT) has many attributes, some attributes are unique and others are special. One of these attributes is 'rahmat' meaning mercy. Allah (SWT) states my mercy has surrounded everything. Who is this mercy? This refers to the beloved Prophet Muhammad (blessings and peace be upon him). She continued stating that some people are chosen i.e. Awliyah Allah (friends of Allah, within these people others have higher status i.e. Shaykh Abdul Qadri Jilani (RA) who is leader of all Saints. Islam also recognizes some land to be blessed, i.e. the land on which the Awliyah Allah are present; some months are blessed i.e. Ramadan/Mawlid-un-Nabi (blessings and peace be upon him). 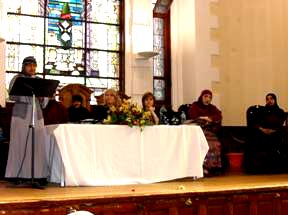 Allah Almighty states 'O Beloved, If I didn't create you then I wouldn’t have made my existence revealed' thus making the Holy Prophet (blessings and peace be upon him) birthday the greatest day of all because we have received all these blessings due to this great day. So we should celebrate and rejoice on this day.

The next talk was delivered in English by Sister Humma. Her chosen topic was Islamic contribution to knowledge. She first stated that Science has just now verified those things which we have already known through the Quran 1500 years ago. She also explained that the Quran and Sunnah are the best sources of knowledge, which contain maths, chemistry, Science etc. She further quoted from the Quran the first word which was 'Iqra' which means 'read'. This further emphasizes the importance of seeking knowledge. She also explained that Islam had contributed to society much more than any other religion had. All the great Muslims' names had been amended to look as though the contributions came from non-Muslims. The names changed to Latin names hide the greatness of the life of Imam Bukhari (RA). She concluded with the message of bringing the youth back to Islam and to link ourselves with Deen again and to become successful Muslims like the preceding Muslim communities. 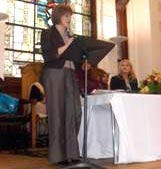 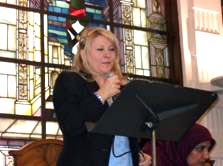 The English speech was delivered by Humaira Shabir. Her speech was about how the Holy Prophet (blessings and peace be upon him) was a source of Mercy for non-Muslims. Sister Humaira made the topic relevant to Muslims and non-Muslims alike which was an excellent method of addressing both the audiences. One very inspiring and intriguing fact that Sister Humaira elaborated, as stated in the Holy Quran, is that religion is not a compulsion to anyone, and that everyone has the right and freedom to choose what path he follows through exercise of his/her free will.

She explained that Islam is not what it is portrayed by the extremists and terrorists of today. Rather Islam teaches love, peace and harmony. Humaira expressly elaborated the rights of mankind: religious freedom, respect, equality, human life, freedom of self expression, rights of justice and the rights of non-Muslims. 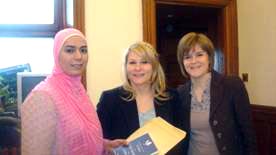 As part of the interfaith dialogue, Nicola Sturgeon, the Deputy-Minister and Pauline McNeil an MP for the Labour party in Glasgow were invited, both of whom had an opportunity to come on the stage and express their valuable dieas, Nicola And Pauline were grateful to Minhaj-ul-Quran International for inviting them as well as being happy to be part of this great event.

Sister Sweba Majid, a graduate of ICIS, spoke about the recent Fatwa that has been issued by Shaykh-ul-Islam Dr. Muhammad Tahir-ul-Qadri. This was a great success because the information from the Fatwa can be looked at in an in-depth analysis by both members of Parliament which they can further explain to colleagues and other members of Parliament. They can also have an understanding of what an actual Fatwa is and transfer their knowledge when they speak about such issues when on duty. Nicola and Pauline both received a Muslim Youth League information pack with a copy the introduction to the 600 page Fatwa by His Eminence Shaykh-ul-Islam Prof. Dr. Muhammad Tahir-ul-Qadri. They both had a chance to speak about the event. 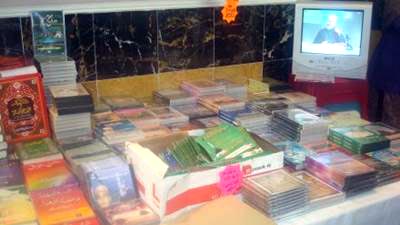 The promotion of Shaykh-ul-Islams's books was done on stage as well as the translation of Irfan-ul-Quran in the form of an Urdu DVD, which proved to be very successful. The stall was set up showing the vast number of books written by Shaykh-ul-Islam as well as the countless lectures he has delivered. Literature was available both in Urdu and English languages.

Gift packs were presented for the English as well as Urdu attendees that included information about Shaykh-ul-Islam as well as his works both in the form of speeches and books. These were presented to everyone at the end of the programme.

The programmes concluded with greetings and salutations invoked on the greatest of creations, The Holy Prophet Muhammad (blessings and peace be upon him) and ended with supplication. Many thanks are due to all the sisters who helped in arranging and organizing these events, especially Sister Nasreen who helped amply in the Stepps events as well as the rest. Auntie Kauser deserves our gratitude for her help during the Charing Cross event.

Also big thanks are due to the sisters who have newly joined Minhaj-ul-Quran and ensured that the events were a success, namely Zahra, Nafisa and Tahira.