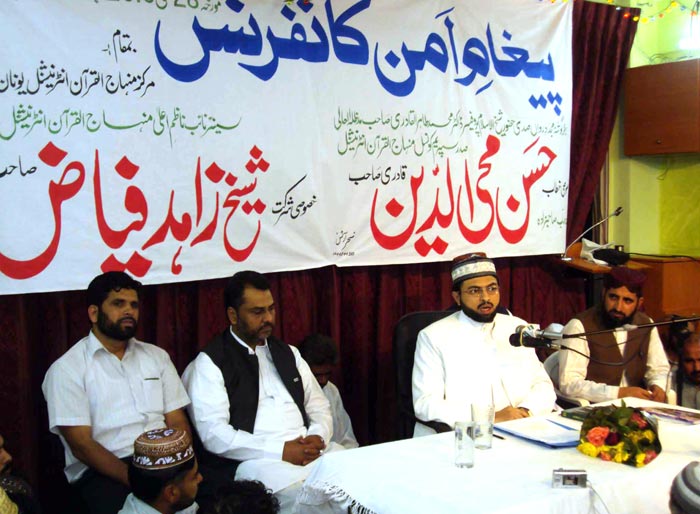 Minhaj-ul-Quran International (Greece) organized ‘Peace Conference’ on May 28, 2010 in MQI Centre Rendi. Sahibzada Hassan Mohi-ud-Din Qadri, Chairman of MQI’s Supreme Council, was the guest of honour on the occasion. He had come to Greece during his tour of Europe. The Conference was attended by over 1200 delegates from different parts of Greece. Sheikh Zahid Fayyaz, senior Deputy Secretary General of MQI, was also present among the distinguished guests. 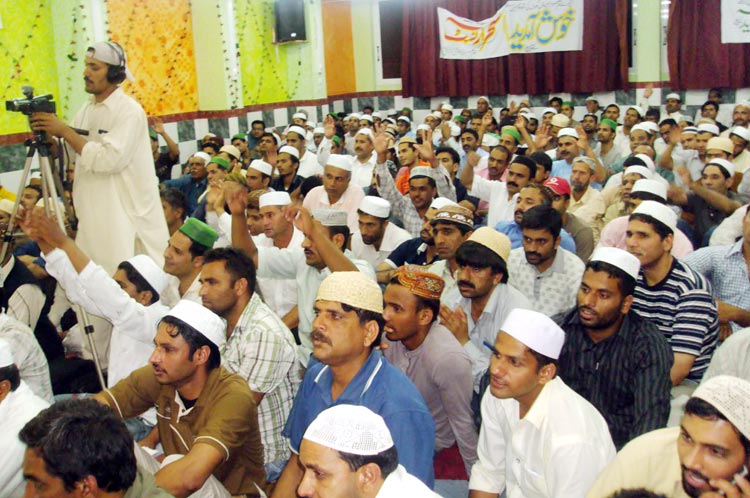 In his keynote speech to the Conference, Sahibzada Hassan Mohi-ud-Din Qadri said that the essential message of the Holy Quran is peace. The blessed life of our beloved Prophet (blessings and peace be upon him) proves in no uncertain terms that peace is the central message of Islam. That is why Allah Almighty described the Holy Prophet (blessings and peace be upon him) as the Prophet of Mercy for all the worlds.

Sahibzada Hassan Mohi-ud-Din Qadri said that Allah Almighty brought up the man in the world of nothingness when he was but nothing. Then He kept on providing for him during different stages until he was born and blessed with the motherly love. He said that Allah Almighty brought up the man from the world of nothingness to the world of soul through the Prophetic Light (blessings and peace be upon him) because He created the Noor-e-Mustafa (blessings and peace be upon him) first of all. He then created everything else with the Light of His Beloved (blessings and peace be upon him). Allah said that He conferred His attributes such as mercy on the mother so that she could give food to the kid when he felt hungry by ignoring her own needs and going to any extend to fulfill the demands of her child. 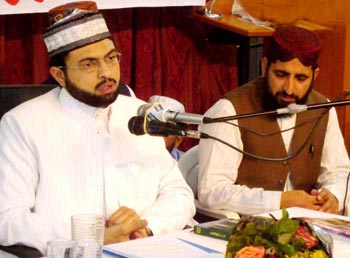 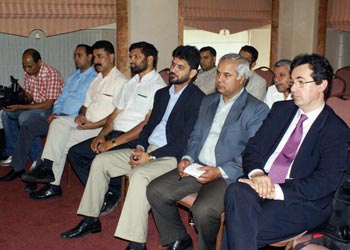 Sahibzada Hassan Mohi-ud-Din Qadri said that it is human constraint that unless he sees something, he cannot believe it. Therefore, Allah Almighty used the motherly love as an example for man to understand the depth of the Divine Love. The way mother weeps on separation of her son, Our Creator feels in the same way at our disobedience. The way one remembers one’s mother every now and then on growing up and she becomes happy, in the same way Allah becomes happy when one repents of one’s sins and seeks Allah’s forgiveness. 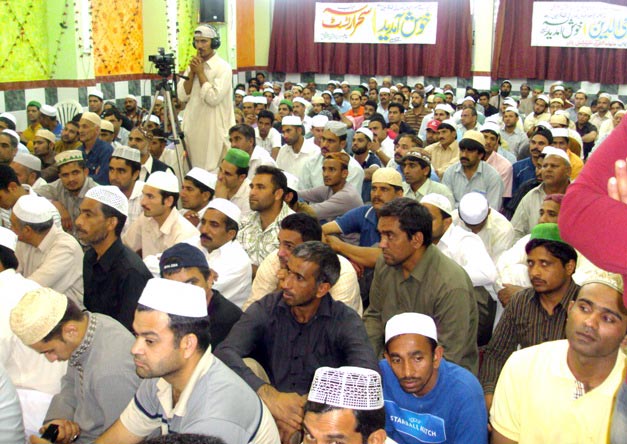 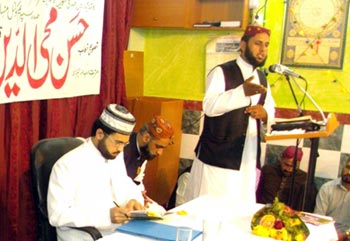 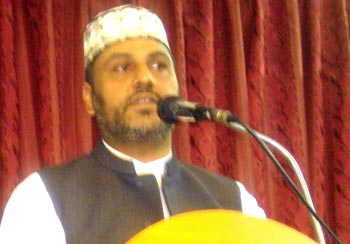 He said that every moment of the Prophet’s life is nothing but mercy not only for his own followers but also for others. The love and mercy which the Holy Prophet (blessings and peace be upon him) expressed for his companions, was also extended to the Jewish children and all those who created troubles in his way. Sahibzada Hassan Mohi-ud-Din Qadri said that the attainment of peace was a shared goal of every religion because teachings of all religion in their essence preach peace, love and harmony. It is only a few bigoted elements who are bent on creating circumstances to cause a clash to happen among different religions and civilizations. He said that there was a need to expose these elements from our midst and it required working in unison to accomplish this collective task. 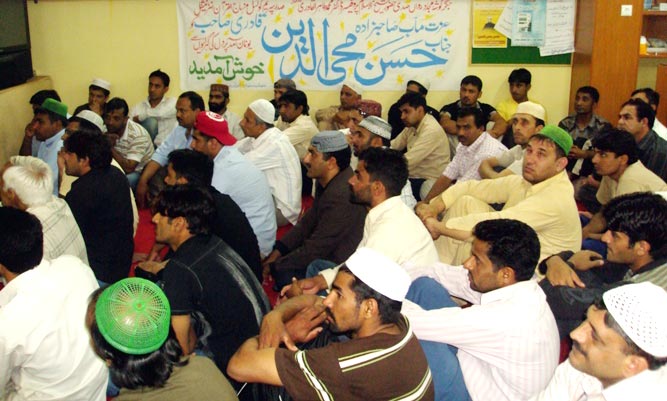 Sahibzada Hassan Mohi-ud-Din Qadri said that the idea of ‘Clash of Civilizations’ was a non-starter in the first place because it presumed the presence of inimical and opposing streaks in the teachings of different religions. He said that the proponent of such fallacious notions did not study deeply or understand the original teachings of all religions. They only got carried away by the superficial reading which led them to present such hollow notions. 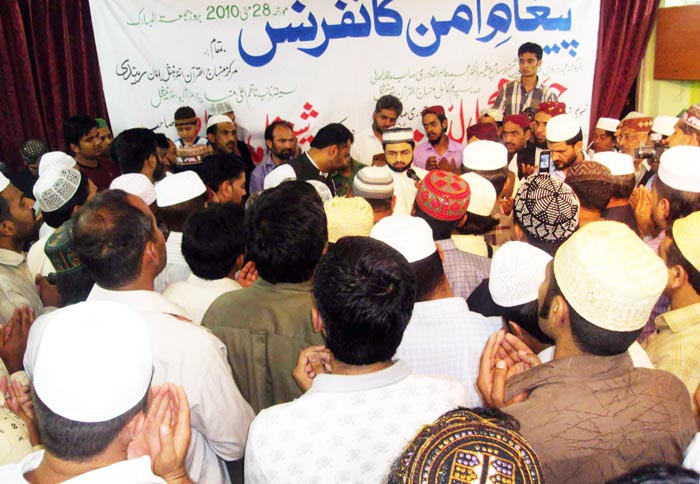 Sahibzada Hassan Mohi-ud-Din Qadri asked the followers of different religions to build bridges instead of walls and bring people of different faiths together. He said that Minhaj-ul-Quran International is working for the promotion of peace, harmony and interfaith dialogue under the inspiring leadership of Shaykh-ul-Islam Dr Muhammad Tahir-ul-Qadri. He also referred to the historic Fatwa issued by His Eminence Shaykh-ul-Islam, saying that the Fatwa draws heavily on the Quranic text, Hadith and Jurisprudence of all Schools of Thought. He said that it constitutes the frontal attack on the ideology of extremism and conservatism and exposes their hidden agenda. ‘There can be better way to promote global peace than to contribute so hugely in terms of ideas with a view to exposing the extremists. The world would not be able to forget Shaykh-ul-Islam’s contribution,’ he concluded.

The Conference was also addressed by different speakers belonging to different communities.