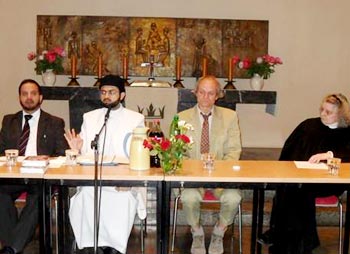 Minhaj-ul-Quran International (Berlin) organized an interfaith event on May 29, 2010 in Heilandkirche. The event started with recitation from the Holy Quran by Wajahat Ali Tarar (Minhaj Youth League) with German translation. After that, there was a welcome address by Faiz Ahmed, the President of Minhaj-ul-Quran Berlin. He threw light on the concept of the evening and how it would help form partnership to defeat the forces of extremism and terrorism.

After his introductory speech, he handed over to the President of MQI Supreme Council Sahibzada Hassan Mohi-ud-Din Qadri. He started his speech by praising God and his beloved Prophet Muhammad (SAW). After that he explained that the real meaning of Islam is Peace. He also threw light on the Fatwa on Terrorism authored by His Eminence Shaykh-ul-Islam Dr Muhammad Tahir-ul-Qadri. He mentioned that the whole world is facing a critical crisis and there is a huge need for the communities to engage with one another. 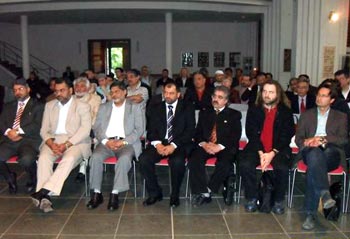 Sahibzada Hassan Mohi-ud-Din Qadri said that the only way to defeat terrorists and extremists is through collaboration. He also said that there is a manifest difference between Muslims and Khwarjis and that people who commit suicide bombing are out of the orbit of Islam. After that, he referred to Dr. Tahir- ul-Qadri’s saying that “Terrorists are not the heroes of the Ummah but the heroes of the hell fire, and they are leading towards hell fire”.

After Hassan Mohi-ud-Din Qadri’s English speech, which continued for about 40 minutes the people from various communities and organizations had the opportunity to ask questions about different aspects of Islam and MQI. The question and answer session continued for approximately 15 minutes. The whole speech was translated into German language by Mr. Wartenberg.

At the end, Thomas Büttner, one of the organizers, thanked the audience for their attendance and attention. He invited everyone to a Pakistani dinner. 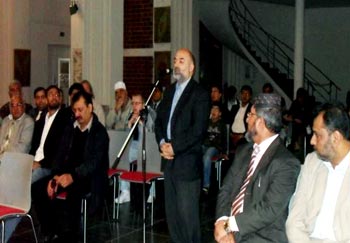 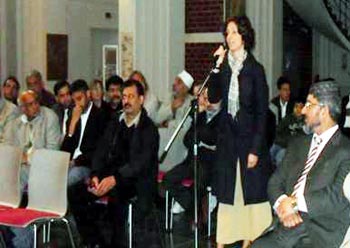