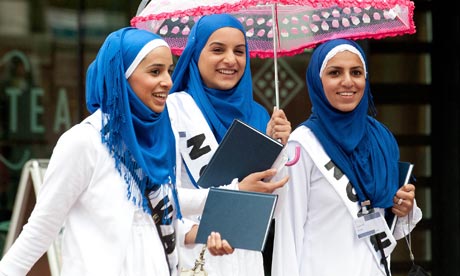 After a modest breakfast came the first choice of the day: to take part in sporting activities ranging from five-a-side football to archery, or to join the Sunday morning nature stroll around the campus. Then it was down to the serious business: a series of lectures, workshops and presentations, punctuated by prayers and countless impromptu street-corner debates.

This is al-Hidayah 2010, a three-day event that kicked off on Saturday and attended by 1,300 Muslims – mainly young men and women – that has been billed as the UK's first anti-terror camp.

Devotees of Muslim scholar Dr Muhammad Tahir-ul-Qadri have gathered at the University of Warwick's campus to be taught practical ways of countering extremist views in their schools, universities and communities. They have been learning how to engage with people expressing extremist views and are being directed to passages in the Qur'an and other Islamic texts to allow them to argue against them.

The camp follows the publication by Qadri, founder of the moderate Minhaj-ul-Quran International (MQI) movement, of a headline-grabbing "fatwa on terrorism", a 600-page volume claiming to "remove decisively" any theological justification for Islamist terror.

"People have long asked where are the moderate Muslim organisations? What are they doing to combat extremism," said MQI spokesman Shahid Mursaleen. "We are trying to train young people here to counter the arguments they hear from the radicals, to give them the knowledge so they can question the extremists and contradict their ideology."

Delegates have paid £200 each to attend the event, but such has been demand that many more have been turned away. They have come from across the UK and mainland Europe, even from the US and Canada. The concourse around the conference area is a colourful mix of delegates, some in traditional dress, many in skinny jeans and hoodies.

Dawud Qadri, 23, a sales worker from Manchester, said he believed that, given the right tools, moderate Muslims could stop friends, neighbours and colleagues from being radicalised.

He said the sort of arguments being rehearsed at the camp were exactly what Muslims and non-Muslims had been waiting for. "The fatwa is conclusive. It goes straight to the heart of the issue. It very clearly condemns suicide bombing, it doesn't say sometimes it's OK, sometimes it's wrong. It clearly says it's wrong."

In his opening lecture Dr Qadri argued that radicalisation was a slow process that began with an "ideological infection". Such an infection could be treated before the sufferer turned violent if fellow Muslims got to them and showed them their philosophy was wrong.

Delegates are taught how to organise study circles and seminars in their communities. One workshop asked participants to consider how they could "break the ice" at a session involving people they feared had extremist views and how they could "personally portray Islam as a beautiful peaceful religion".

Qadri announced that a fleet of vehicles would be travelling the country trying to counter extremism – in effect mobile libraries filled with books and DVDs and staffed by volunteers. "We will knock on every door," said Qadri.

Gulnar Khan, a community development worker from Manchester, said she would be passing on what she had learned to her neighbours. She said women had a large part to play in fighting extremism. "We have a greater influence in the children – the future."

Mohsin Khan, 19, from Oldham, was just revelling in the atmosphere. "I want to learn more about my religion, about why terrorism is wrong, about being a better human. The media loves to show Muslims as terrorists. It's great to be part of something countering that."

However, some commentators have doubted that Qadri's fatwa will do any good, arguing that countering violent fatwas with peaceful ones gives extremists more credibility.