Al Hidayah Magazine – The New Voice of Islam in the West 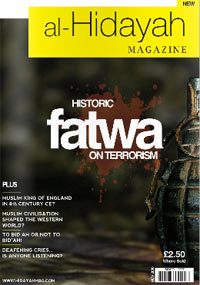 The Al-Hidayah Magazine is a concerted effort to present articles that will convey the correct interpretation of Islam in the context of the modern world. It will also serve as an intellectual and social medium addressing the diverse aspects of Muslim life and the challenges it brings.

The Al Hidayah Magazine was officially launched at Al Hidayah 2010 during the press conference by Shaykh-ul-Islam Dr Muhammad Tahir-ul-Qadri with the national and international media.

The aims and purpose of the magazine are as follows from the first issue:

“Muslims around the world are upset by the way their faith is wrongly perceived. This frustration and anger is not necessarily aimed at the media who may be misrepresenting Islam but at Muslims who fail to portray the true image of Islam.

Furthermore Muslims living in the West face various issues that are unique to them for which they require specific guidance. The core teachings of Islam, from the primary and secondary sources, will of course remain the same. Just as Muslims in every country have different cultural practices relating to local traditions, the same will be the case for Muslims living in the West. As with most contemporary issues confusion is rife as to the correct Islamic perspective to adopt.

It is to serve these two aims of correctly representing the true Islamic perspective on many issues and also to shed light on various contemporary issues facing Muslims in the West, that the Al-Hidayah Magazine is brought to you; Al-Hidayah meaning ‘The Guidance’.

We would like to present the Al-Hidayah Magazine, the new voice of Islam in the West, to readers.”