On Friday the 19th of December 2010 Minhaj-ul-Quran Peace and Integration Council (MPIC) hosted its annual Interfaith Christmas Event at its centre in Forest Gate, in conjunction with various faith groups and communities residing in the local vicinity. Mr. Ishtiaq Ahmad, a prominent Minhaj-ul-Quran figure welcomed all the attendees for taking precious time out from their hectic schedules coupled with the adverse weather conditions, to be present in such an auspicious gathering. Mr. Ahmed stated that ‘we are fortunate to live in a country which is so multicultural where we share common values and traits’. Furthermore in addressing the dignitaries present, Mr. Ahmed said that ‘as Muslims our faith is incomplete until we acknowledge and accept the importance of Jesus Christ and hence this centre openly celebrates the Birth of the Beloved Prophet Jesus. 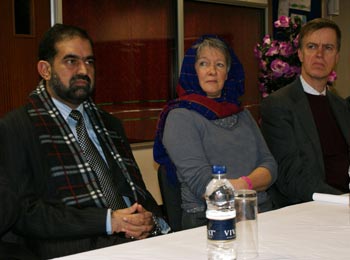 The event began with the reading of passages from the Holy Bible and Holy Quran. The passage from the Holy Quran was recited in Arabic by Hafiz Asim Shabir reflected on the birth of Prophet Isa (Jesus) and the story of the meeting of Maryam (Mary) and Jibril (Gabriel). The Gospel of Matthew read by the Reverend Ian Parker reflected upon his beloved birth, Christ brought glad tidings to the world. Ros Southern of the Conflict & Change organization congratulated the centre of Minhaj-ul-Quran on its relationship with the local community and how open, frank and welcoming they were towards all different faiths, races and creeds. In closing she stated that this should be a lesson for society at large and we should all come together and embrace this concept.

Redbridge councilor, Gurdial Bhamra, who works for the VNC (Voluntary Network Centre) Newham, thanked all in attendance for being invited and remarked that forgetting the aspect of religion for a moment, we as humans should embrace the notion of integration as it is viewed as the best path forwards. In referring to the government’s new ideology of the Big Society, Councilor Bhambra emphasized that the essence of this idea is to work together and help one another, which was the exact purpose of this event. 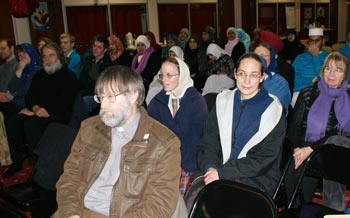 Allegra Mostyn-Owen who has taught Art Classes at the Minhaj-ul-Quran centre for a number of years thanked the local Imam for his services to the community and how refreshing it was for a mosque to be so open-minded. Her classes had been aimed at young children; however she stated that her aim for the future would be to do larger scale classes with the addition of women. This would bring about an inter-faith dimension to the integration of society.Honorable Stephen Timms MP was the next person to relay his message for all those present. Mr. Timms echoed the similar sentiments that had been expressed by those who had spoken before him. He likened faith with politics mentioning that ‘faith is the source of values that make our communities and hence our politics work’. He went further on to say that, ‘faith instills values such as patience, solidarity, kindness and helps in the building of bridges between communities. In his closing Mr. Timms thanked Minhaj-ul-Quran for its efforts and hoped that this ‘wonderful’ relationship will continue to gain strength in years to come.

The organizers then showed all those in attendance the work of Minhaj-ul-Quran in trying to build those bridges that Mr. Timms had mentioned previously. The video which was shown to the public was one with Shaykh-ul-Islam Dr. Tahir-ul-Qadri, a leading authority on Islam attending the event of Christmas with the Archbishop of Pakistan in the city of Lahore. Upon the end of the video the General Secretary of Minhaj-ul-Quran International Dr Raheeq Abbasi was welcomed on stage to give the message of Minhaj-ul-Quran. Dr Abbasi said that there was no doubt that differences between Muslims, Christians and Jews existed, otherwise there would only be one religion in the world. However he stated that Minhaj-ul-Quran teaches that once these differences are accepted a person becomes liberated. It gives people the opportunity to live a life of co-existence where one respects different cultures and ideologies with the notion of brotherhood. Mr. Abbasi in closing remarked that this event was the basis of the above named philosophy. 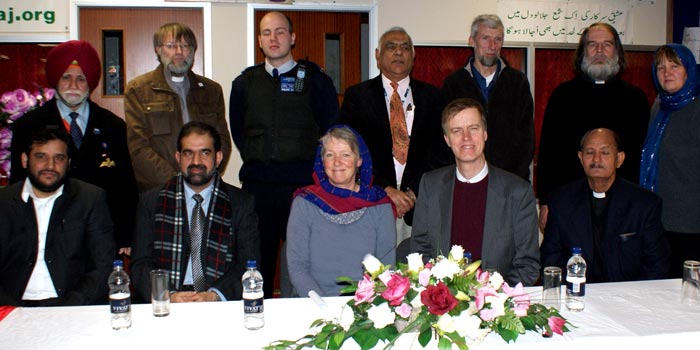 The final speaker of the night, Father Matloob Barnabas, a prominent Christian leader in the community from Emmanuel Church, Upton Park, was invited to the stage to convey the message, this event was trying to achieve. His opening words stated that ‘we believe in friendship and love’. Father Barnabas said that the local community had established the Faithful Friends’ Forum, where religious leaders from all faiths and denominations were invited to understand about each other’s faith and ideologies. The aim of the Faithful Friends is to respect other religions, embrace and celebrate events such as Eid, Mawlid, Christmas, Vaishaki, Diwali and Hanukah. Here it was mentioned that over the past few years all religious leaders had come to the Minhaj-ul-Quran centre over Ramadan to partake in fasting for one day to better understand one another’s faith. Father Barnabas in his closing statement hoped for the borough of Newham to live in a culture of mutual co-existence and try to promote the message of love and peace.

Other prominent community members who attended included Gowri Pillai of the Bridge Builders organization, David Mow from the Woodgate Church Community, the Reverend David Richards and Mrs Carol Richards of St. John's Church in Stratford and officers from Forest Gate South Safer Neighborhoods team.The organisers once again thanked all for their respective contributions in making the event a success and prayed for all to have a safe Christmas and a blissful New Year.