Minhaj-ul-Quran Women League Glasgow hosted a grand conference on Saturday, 27th February 2011, to celebrate and commemorate the birth of the Holy Prophet (SAW). 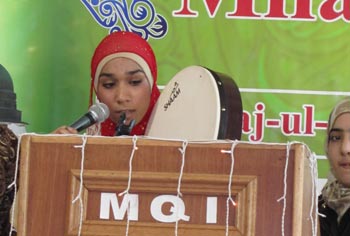 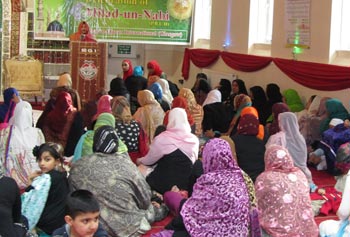 The Conference was presided over by Sister Ambreen Mahmood (President of MYL-Sisters UK) who welcomed the participants wholeheartedly to Minhaj-ul-Quran International’s Centre and also congratulated everyone on the birth of the Holy Prophet (SAW) and thanked them for attending such a blessed & spiritual gathering.

The programme  commenced by recitation of the Holy Quran by Sister Asifa and was then followed by Sister Maheen Kausar who recited beautifully the praises of the Holy Prophet (SAW). Throughout the programme Sister Ambreen gave brief introduction to Minhaj-ul-Quran International (MQI) and its subsidiary Minhaj Welfare Foundation (MWF). She also highlighted the great literature produced by his eminence Shaykh-ul-Islam Dr. Muhammad Tahir-ul-Qadri that is widely available in the form of DVDs and books. She also introduced some of the great works produced by his eminence Shaykh-ul-Islam i.e. Fatwa on Terrorism & Suicide Bombings, Irfan-ul-Quran, Minhaj-us-Savi etc. 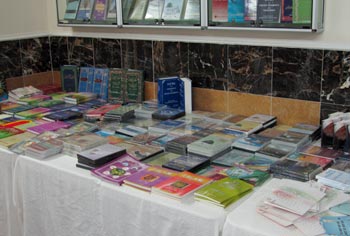 The final speech was delivered in Urdu by the second chief guest from London, Sister Faiza Qadri; who delivered an effective speech on the topic ‘why we should celebrate Milad-un-Nabi (SAW)’. She supported the celebration of Mawlid-un-Nabi (SAW) by quoting various Quranic verses and ahadith of the Holy Prophet (SAW). She also highlighted that Allah Almighty Himself celebrated the birth of His Beloved Messenger (SAW). Sister Faiza concluded by quoting many great scholars that the night of Mawlid-un-Nabi (SAW) is greater than all nights of the year including Laila-tul-Qadr, Shab-e-Qadr because this night the Greatest of all Creations, and the Mercy for the entire Mankind came to this world and it is due to the birth of the Holy Prophet (SAW) that the Holy Quran was revealed; it is due to the Beloved Messenger (SAW) that Allah Almighty bestowed upon us the night of Laila-tul-Qadr and all other great nights. The gathering concluded with invoking greetings and salutations on the Holy Prophet (SAW) by Sister Ruhi Ahmed (Vice President of Women League Glasgow) and Maheen Kauser and supplication was made in the court of Allah Almighty by all participants.