Mawlid Festival 2011: A struggle of peace, love and knowledge 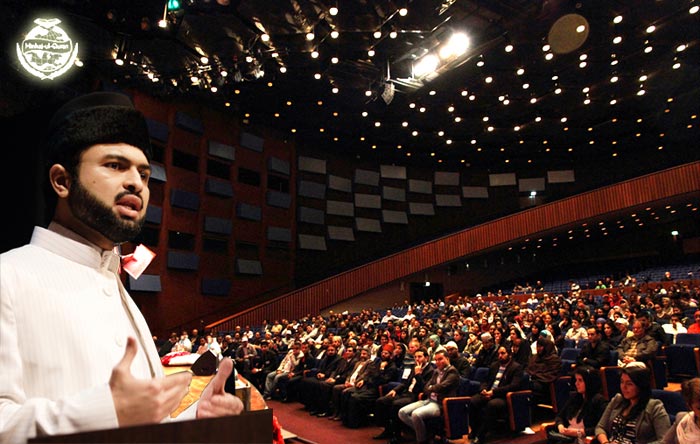 The Hague – On Sunday March 27th, Mawlid Festival took place for the fourth time: the biggest multicultural event in The Netherlands entirely focused on Holy Prophet Muhammad (peace be upon him) . This year's theme of the festival was "A struggle of peace, love and knowledge". Minhaj-ul-Quran Youth League NL wanted to dispel the numerous misconceptions regarding Prophet Muhammad (peace be upon him) and show his true character. Mawlid Festival was held this year for the fourth time in a row and it was a unique opportunity to convey the teachings and message of the Prophet (peace be upon him). 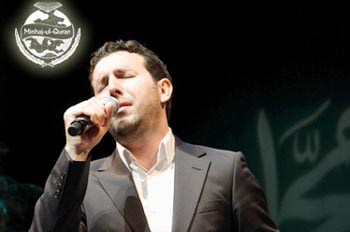 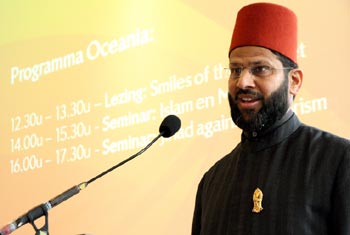 Minhaj-ul-Quran Youth League NL attempted to counterbalance the spiral of negativity concerning Islam, Muslims and the Prophet (peace be upon him) through lectures, discussions, photo slideshows, seminars and performances in order to show who Prophet Muhammad (peace be upon him) really was. The programme consisted of two sections: in the afternoon there were parallel side events such as lectures, nasheed recitals, presentations and the Mawlid market. In the evening the main programme took place in the theater’s biggest hall. The chief guests of the festival were Shaykh Hassan Mohi-ud-Din Qadri (son of Shaykh-ul-Islam Dr Muhammad Tahir-ul-Qadri), Shaykh Abdulaziz Fredericks from Glasgow, Peter Sanders from London and Shaykh Ramadan Qadri (Farghana Institute Manchester). 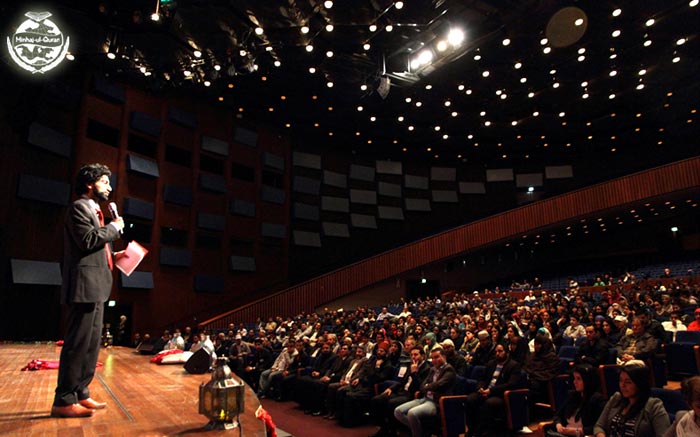 The festival took off with the lecture ‘Smiles of the Prophet’ by Shaykh Muhammed Ramadan Qadri where those present got acquainted with the humorous moments from the life of the Prophet Muhammad (peace be upon him). The visitors left the room with a big smile on their faces. Subsequently there was a lecture of Tasneem Sadiq, called ‘Traditional Islam in the modern world’. People were willing to stand for more than an hour (due to lack of space) to attend the lecture indicating how interesting the subject was. The subject matter of this lecture was taken from Shaykh-ul-Islam’s workshop which he gave last year at the GPU in London. 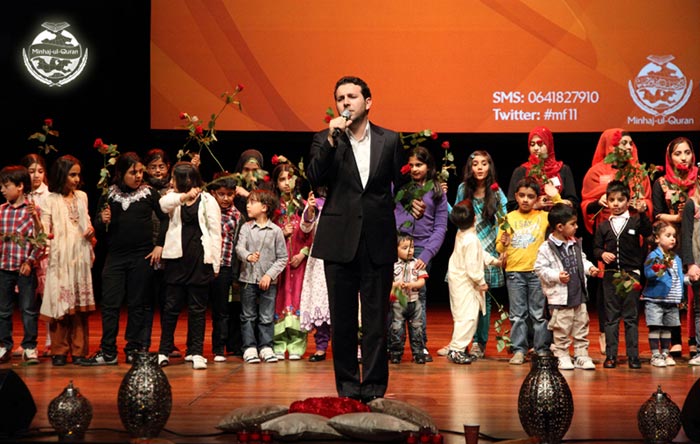 At the same time a seminar took place, ‘Islam and Environment’ where Shaykh Muhammad Ramadan told about the Green Prophet Muhammad (peace be upon him). Noer’dien Teekens from the foundation ‘Groene Moslims’ (Green Muslims) gave suggestions for a more conscious and greener life. Visitors were offered the possibility to take a journey through the Islamic world via the photo slide show ‘Meeting with Mountains’ by Peter Sanders. Mr. Sanders spoke of his inspiring encounters with great scholars from around the world. Shaykh Abdul Aziz Fredrick’s from Glasgow (UK) gave an inspiring, humorous and reviving lecture on 'The need for Prophet Muhammad (peace be upon him) in our time'. During the seminar ‘Struggle against terrorism’ Shaykh Hassan Mohi-ud-Din Qadri (son of Shaykh-ul-Islam Dr Tahir-ul-Qadri), Professor Maurits Berger (University of Leiden), Peter Knoope (International Centre for Counter-Terrorism), Edwin Bakker (Clingendael Instituut) and Mohammed Ghaly (University of Leiden) entered into a discussion regarding Islam and terrorism and in particular about the fatwa against terrorism by Shaykh-ul-Islam Dr. Muhammad Tahir-ul-Qadri. 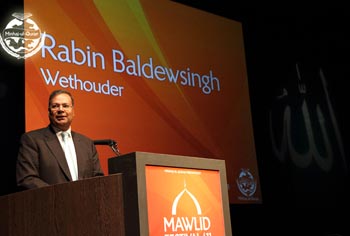 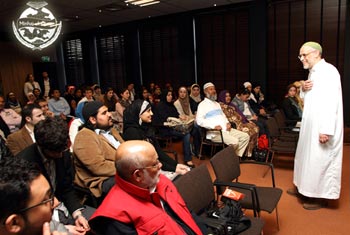 In his introduction Shaykh Hassan Qadri explained the uniqueness of this fatwa, how it reflected the message of Prophet Muhammad (pbuh) and how it is an important tool to promote peace and combat terrorism. Edwin Bakker gave a talk on where Europe stands concerning counter-terrorism and Mohammed Ghaly spoke about the general impact of fatwa. At the end there was a panel discussion and an opportunity for the audience to interact with the speakers. The English translation of the fatwa was presented for the first time in the Netherlands at this seminar and was received very well by the audience. 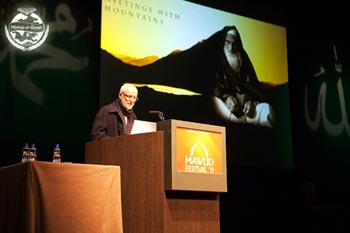 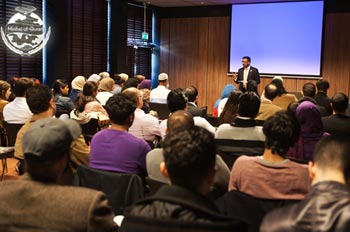 During the entire day the Mawlid Market was accessible with stands of Minhaj-ul-Quran Youth League NL, information stands of student associations and educational institutes, Islamic art exhibitions, an exhibition of the daily utensils of the Prophet Muhammad (peace be upon him) from England and stands where books and clothing were sold. Aside from all of the activities mentioned above the Children Mawlid was taking place simultaneously. Approximately 80 children participated in a nice, instructive and relaxing programme. Just like previous years, this part was yet again a huge success; as parents witnessed how their children were reluctant to head home. During the evening programme at the World Forum Theater visitors were given the opportunity to attend the lectures of Shaykh Hassan Mohi-ud-Din Qadri, Shaykh Abdel Aziz Fredericks and Peter Sanders and enjoy the performances of well-known artists like Mesut Kurtis (Turkey) and Hicham Karim (Morocco) in Arabic, Turkish and English. 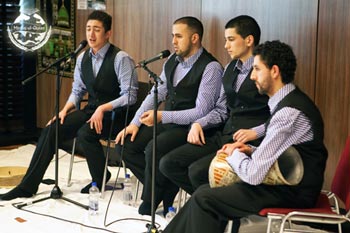 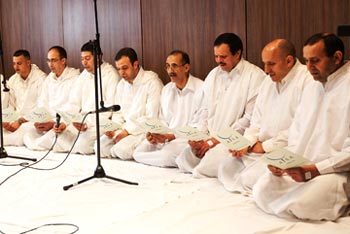 At the end of the evening Minaj-ul-Quran gifted several presents; a smarthpone amongst its visitors, a laptop for one of the new monthly donors and a camera for the winner of the Mawlid Talent show. The main sponsor, energy supplier Green choice, gave an Umrah ticket to Mekkah and Madinah to one of the visitors. Amongst the VIP’s present were Islamic scholars, professors, ambassadors and alderman Baldewsingh of the Hague. Minhaj-ul-Quran would like thank all the sponsors, donors, volunteers, partners and visitors for their indispensable contribution to this year’s Mawlid festival. This festival and all the other events of Minhaj-ul-Quran are utterly selfless and are only to serve Allah (SWT) and His Prophet (PBUH) and to give Islam a proper place in the Netherlands and in our hearts. 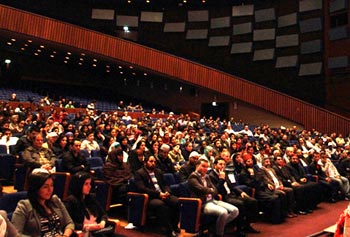 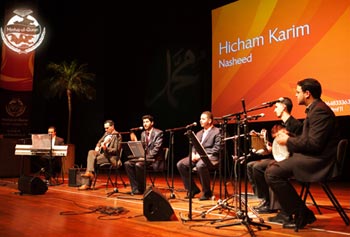 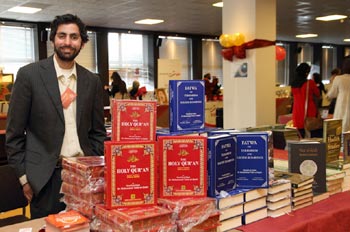 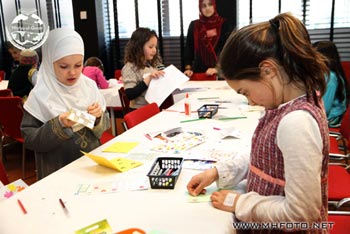