Thousands Of British Muslims Rally Against Extremism In London

LONDON – Thousands of Muslims gathered together for a peace rally to commemorate the 10th anniversary of September 11 attacks, expressing their condemnation of terrorism and extremism.

The Peace for Humanity conference has been organised by the Islamic group Minhaj-ul-Quran, which is also launching a campaign to get one million people to sign an online declaration of peace by 2012 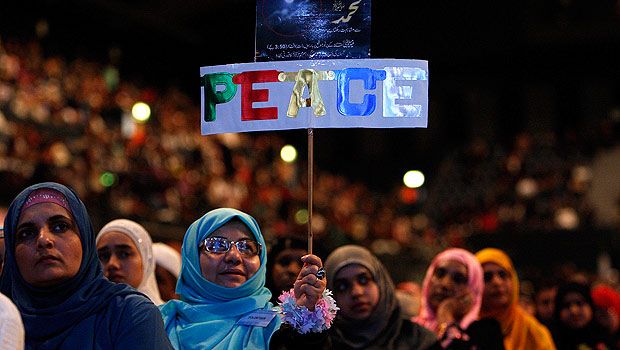 Islam is against terrorism, a leading Islamic scholar told the 12000-strong gathering at Wembley.

Islamic scholar Dr Muhammad Tahir-ul-Qadri said the conference will send a message that 10 years of extremist activity should end.

“We should strive together, to bring an end to the era of extremist terrorism so that the peace and love and fraternity – which is lost because of unfortunate extremistic activity in the last decade – should come to end and we may restore the peace, love and smiles on the faces of mankind,” Tahir-ul- Qadri, the founder of Minhaj-ul-Quran, said.

He added: “We reject unequivocally all terrorism because at the heart of all religions is a belief in the sanctity of the lives of the innocent. The indiscriminate nature of terrorism, which has in recent years killed far more civilians and other non-combatants than it has combatants.”

Video messages of support from politicians, including deputy prime minister Nick Clegg, opposition leader Ed Miliband and communities secretary Eric Pickles were also due to be played along with a collective multi-faith prayer.