A grand Peace Walk was held on Sunday, February 12th 2012, on the auspicious occasion of the birth of the Holy Prophet (peace and blessing be upon him). The annual march was attended by Muslims from different local and national organizations and mosques across Denmark. Under the aegis of Minhaj-ul-Quran International Denmark, the march proceeded from the suburban part of the capital, through the main street and shopping district of Copenhagen, and finally climaxed at the Central Town Square “Rådhuspladsen”. 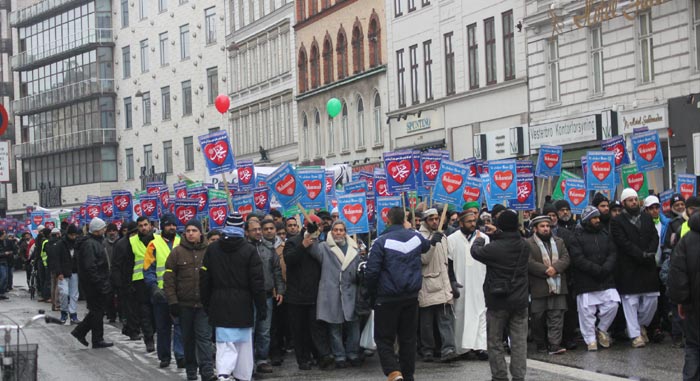 Defying the extreme cold temperatures and heavy snowfall, men, women, and children turned up in huge numbers to mark the blessed occasion with the message of peace, tolerance, and co-existence, clearly noticeable in the many banners and placards swaying in the cold air. As sounds of nasheeds, and salutations filled the winter air of Copenhagen City, the massive crowd marched through the streets, expressing their love to the Holy Prophet (SAW) and sharing the happiness with the bystanders and onlookers lining the footpaths along the route. Balloons marked with “Peace Walk 2012” and sweets were handed out to all the children, and the message of peace and tolerance given by the Holy Prophet (SAW) was conveyed to the accompanying parents.

The media coverage of the event was particularly good, as the event was transmitted live on the largest TV news network l in the country Tv2 News. The hourly news program ran the coverage of the march throughout the day, and thereby giving it national news status. Other national and local news channels and newspapers reported the successful event, repeating the message of peace, love, and tolerance given by the Holy Prophet (peace and blessing be upon him). 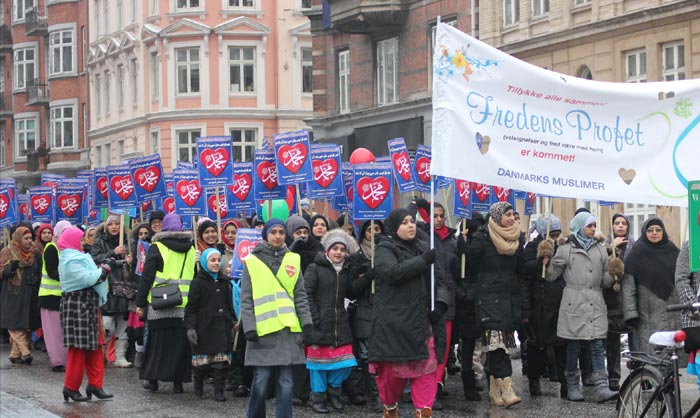 As the crowds descended on the City Town Square, the Quran recitation was performed, and Salutations were sent on the Holy Prophet (peace and blessing be upon him). While the mammoth crowd joined in, 300 balloons, jointly held by representatives from all participating organizations, were released into the wintery skies of Copenhagen. Concluding the event an address was made to the crowd emphasizing the need to combat the misconceptions and distorted image of Islam today, expressing the importance of the celebration of Mawlid un Nabi (peace and blessings be upon him.). The March was concluded with Dua and refreshments were distributed among all participants.