After a boost from the Muslim Youth League UK – Sisters executive team, on Saturday 7th of April MYL-S Huddersfield had their first sisters’ circle. A total of 15 sisters attended. The circle commenced with a beautiful recitation of the Holy Quran by Sana Mazhar followed by Salutations on the Beloved Prophet (PBUH) by Fazeela Shafi. 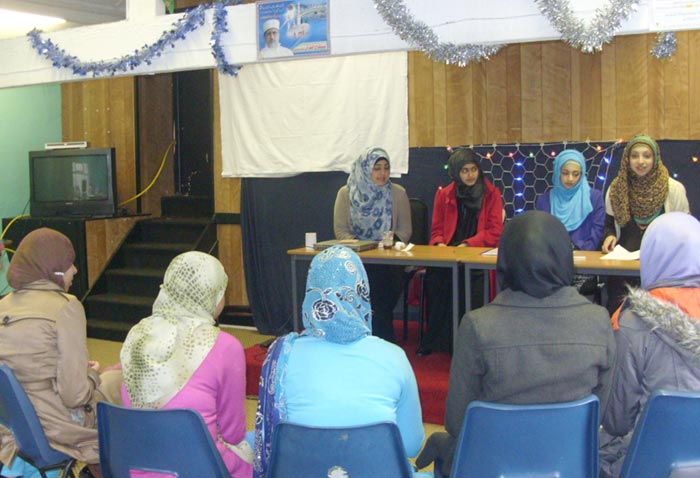 The newly appointed coordinator of Huddersfield, Sadiyah Shafi, introduced herself and thanked everyone for attending and stated that seeking Islamic knowledge is Fard-e-Ain (obligatory on every Muslim adult). She also told the sisters that the angels have lowered their wings and are asking for forgiveness because they are gaining Islamic knowledge, as per a Hadith of the Holy Prophet (PBUH). Sadiyah then introduced the topic 'Modesty (Haya) and mentioned the reason that this topic was chosen because everyone can relate to it. She also stated not everybody is aware of the inner spiritual dimensions of modesty hence it is important to discuss the topic in detail. Everyone was asked what modesty meant to them and, thereafter, Sadiyah defined modesty and explained why it is important in Islam.

She stated it is one of the attributes of the Beloved Prophet (PBUH) and made the sisters aware that this is very important in terms of our discourse as our Iman revolves around the personality of the Beloved Prophet (PBUH); it is only when we stray from this path that we head towards the destruction of our Iman. Sadiyah then spoke about the different types of modesty: modesty with Allah (SWT), modesty with the Prophet (PBUH); modesty with the angels; and modesty with people. She elaborated on each category and gave examples. Furthermore, Sadiyah pointed out that one of the areas where shamefulness should be avoided is in seeking knowledge and in educating. 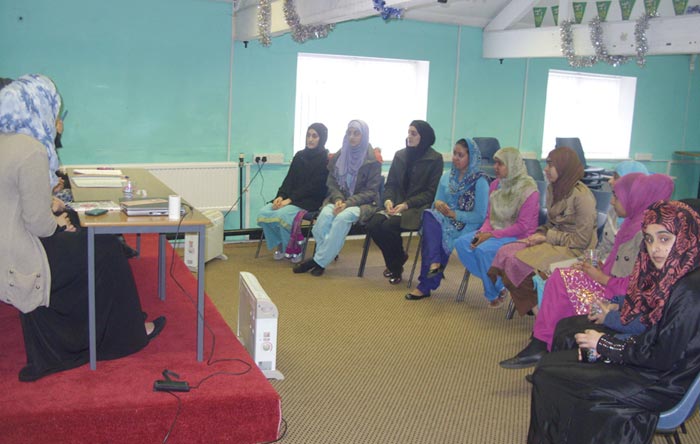 She said we should not be ashamed of asking until we have knowledge and if we do not know an answer to a question regarding Islam, we should not be ashamed to say "I do not know".The group was then asked how we can adopt the quality of modesty. Answers included, reading the Seerah of the Prophet (PBUH) and his Family, reading about the great women in Islam, sitting with righteous people and socialising with the right company. After explaining the benefits of modesty, Sadiyah moved on to the topic 'Hijab' as it is one of the branches of modesty. She spoke about the inner and outer veil including lowering the gaze, modest behaviour around non-‘mahrams’ and wearing modest clothes.

This was followed by a video clip called 'The Permissibility of Western Clothing' by Shaykh-ul-Islam Dr Muhammad Tahir-ul-Qadri. Shaykh-ul-Islam explained that Muslims can wear any type of clothing (dresses, shalwar kameez, shirt and trousers, etc) as long as it is modest and does not go against the teachings of Islam.Throughout the session the sisters were sharing their views and enjoyed the session. They liked the fact that the circles not only help them with their Deen but also give them an opportunity to discuss issues they cannot discuss elsewhere.The group was asked for feedback as well as what topics they would like to discuss in the future, these were noted and will be implemented in the future, insha’Allah. The session concluded with Dhikr led by Aisha Javed and a short supplication by Sadiyah.

The circles will take place on a fortnightly basis. The next sisters’ circle will be on Saturday 21st of April, 4:30-6:00 pm