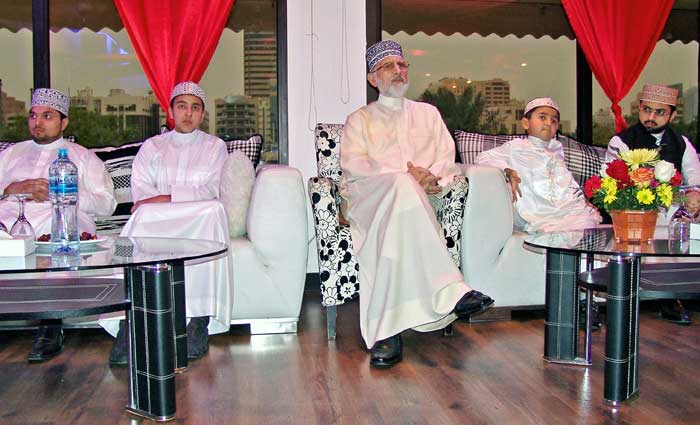 We feel truly honoured on having an occasion of great cordial pleasure, spiritual satisfaction and dreams coming true when Minhaj-ul-Quran Bahrain got the opportunity to host and have the great company of Shaykh ul Islam Dr Muhammad Tahir-ul-Qadri in Bahrain for a period of 4 memorable days. Shaykh ul Islam was on his personal visit to Saudi Arabia for performing Umrah and to other Arabian Gulf countries. He visited the two Holy Mosques and performed Umrah while accompanied by Sahibzada Hassan Mohi-ud-Din Qadri and Sahibzada Hussain Mohi-ud-Din Qadri with their families.

Brief detail of the activities during the visit of Shaykh ul Islam is as follows: 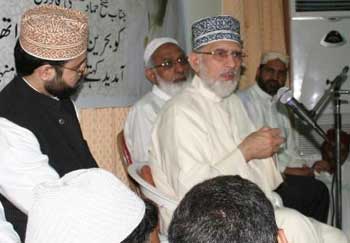 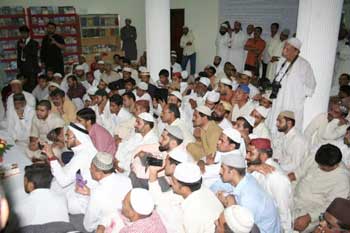 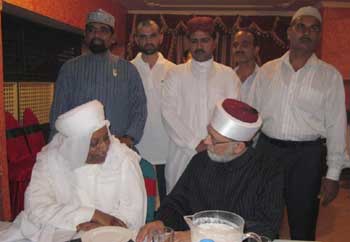 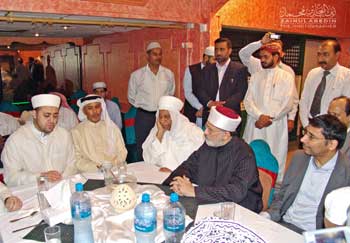 Shaykh ul Islam was invited by Patron of Minhaj ul Quran in Bahrain and head of “Imam Malik Bin Anas Society”, Sheikh Rashid Bin Ibrahim Al Meraikhi at dinner and a spiritual gathering was organized on that occasion. Shaykh ul Islam Dr Muhammad Tahir-ul-Qadri offered Traweeh Prayer with the delegation of Shoyukh and attended the spiritual gathering. He delivered a lecture in Arabic language on the subject of significance of ‘Salat-o-Salam’ in the light of Quranic verses, which was observed with great interest, involvement and deep emotions by the audience, that included people from Bahraini, Pakistani, Indian, Nepali, Syrian and Iraqi nationalities. Delegations and guests from, Oman and Qatar also participated in the program. 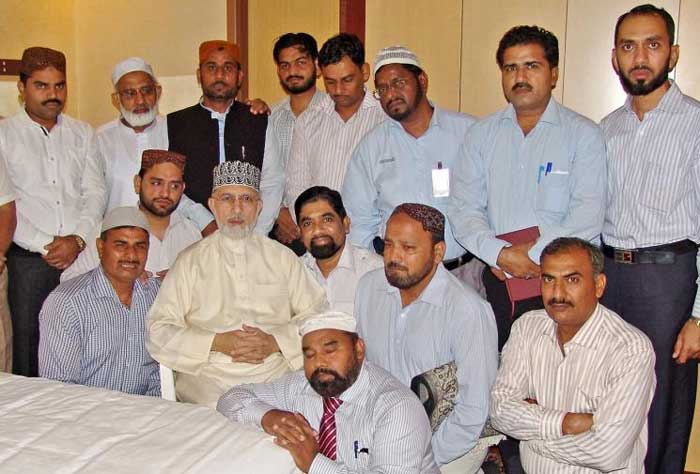 After the lecture, His Eminence presented the compendium of Ahadith, “Minhaj-us- Savi” and granted permissions (Ijaazat) to Sheikh Rashid bin Ibrahim Al Meraikhi. Sheikh Rashid expressed his pleasure and satisfaction on receiving permissions from Shaykh ul Islam and expressed his gratitude. Dr Muhammad Tahir-ul-Qadri held a meeting with members of executive council. He offered Friday prayers in Grand Al Fateh Mosque, with the members of MQI Bahrain and civil society. Imam of the Grand Mosque, Sheikh Adnan had introduction with Shaykh ul Islam after the prayers and welcomed him to Bahrain. 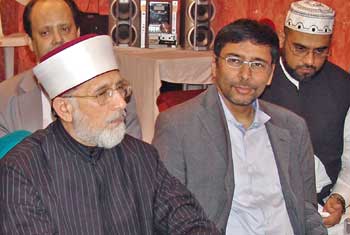 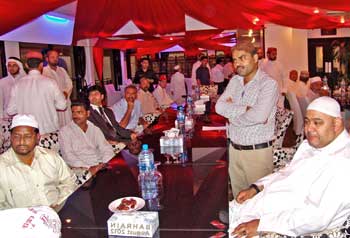 After Friday prayers, a general meeting was organized in MQI Islamic centre with the members and affiliates of MQI Bahrain. A large number of members were available in the centre to see and welcome Shaykh ul Islam. Upon arrival at the Islamic centre, he was warmly received in the recitation of Durood Sharif. He expressed his views of pleasure and addressed the audience briefly and comprehensively with reference to spiritual and moral training and prayed for them all for ascent in spiritual status, betterment and success in all the matters of this world and the world hereafter. The members and affiliates had the opportunity to shake hand with him. 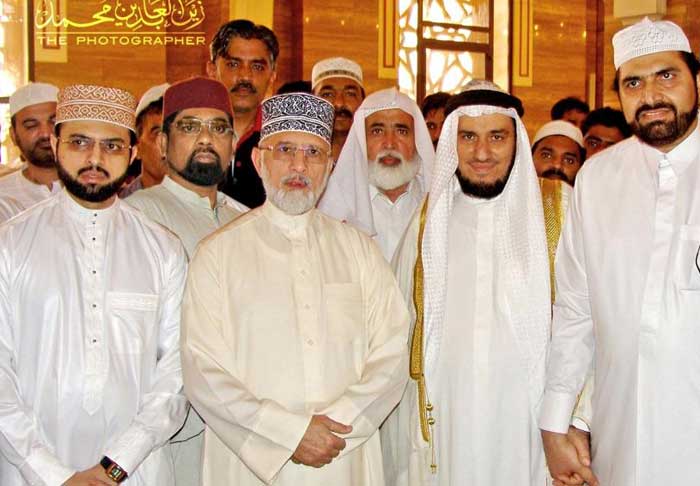 Iftaar dinner was arranged by MQI Bahrain in the honour of respectable guests, Shaykh ul Islam and family, at Marina Club Banquet Hall. The feast was attended by prominent personalities of Bahrain in addition to members and affiliates. Guests from other GCC countries also were present on this occasion.He also accorded time for meeting with national executive council after that. Local meetings were organized during the day with different delegations. These delegations consisted of professionals from finance and management, bankers and law consultants, and women from various fields of life. 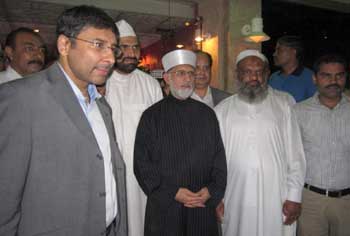 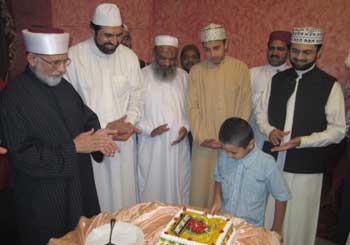 Iftaar and dinner were organized by members of business community of Bahrain in the honour of respectable guests, Shaykh-ul-Islam and family, at Paradise Restaurant Banquet Hall. Sheikh Rashid Bin Ebrahim Al Meraikhi (Patron of MQI Bahrain and Head of Imam Malik Bin Anas Society) also attended the dinner with his companions. Ambassador of Pakistan to Bahrain Mr. Jauhar saleem was also invited on the occasion. Shaykh ul Islam Dr Muhammad Tahir-ul-Qadri and Sheikh Rashid Bin Ebrahim Al Meraikhi exchanged views and talked on the matters of mutual interest. After the dinner, Shaykh Rashid and companions recited Arabic Anasheed, which was attended to with great involvement by the guests. This spiritual gathering concluded with Dua by Sheikh Rashid Bin Ebrahim. 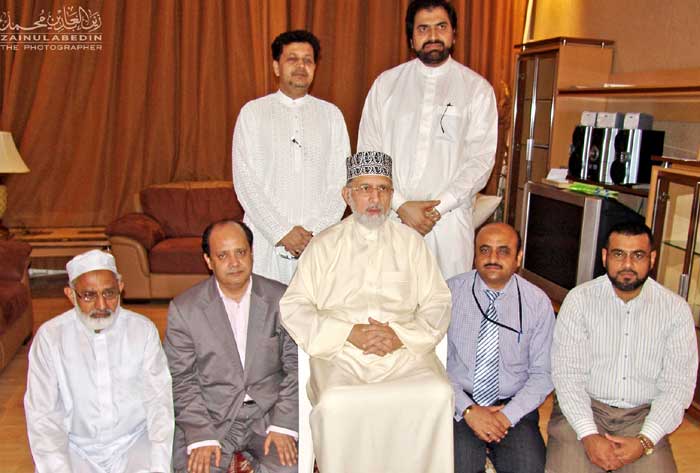 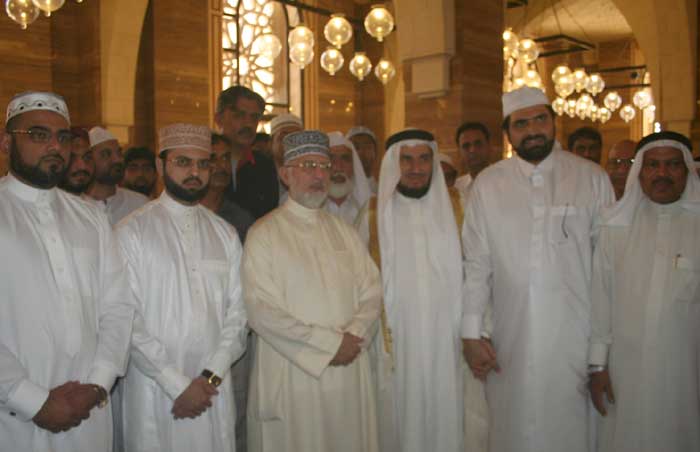