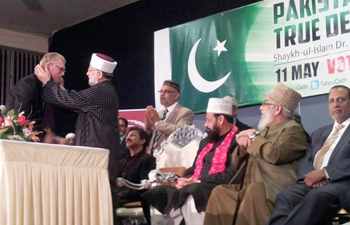 Shaykh ul Islam Dr Muhammad Tahir ul Qadri has appointed a Norwegian convert to Islam, Brother Abu Bakr Siddique, as the spokesperson for Minhaj ul Quran Norway. Shaykh ul Islam announced the appointment of Abu Bakr last month to a large gathering of workers, from Europe and the UK, in Birmingham. Shaykh ul Islam congratulated Abu Bakr on his new role and also made Dua for him. On this occasion MQI leaders from Britain, Denmark Finland, Sweden, Spain Italy, France, Greece, Germany and other countries were also present. All the workers congratulated Abu Bakr on his appointment and prayed for his success in the future.Speaking the occasion Abu Bakr said: “Inshallah I will try my utmost to fulfill the expectations of Islam and try to deliver the message of Minhaj ul Quran as far as possible in the best of ways”. On 4th May 2013, in the presence of Shaykh ul Islam, Abu Bakr also spoke candidly of Shaykh ul Islam and gave his opinion on the democratic efforts he was making in Pakistan.