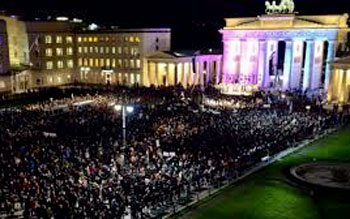 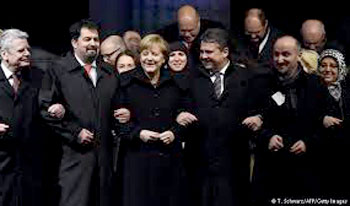 This sent out a clear signal for a peaceful coexistence in the Federal Republic of Germany. Addressing the gathering of about ten thousand people, President of Federal Republic of Germany Mr. Joachim Gauck called on the people in the country, irrespective of their religion and origin, to engage for democracy and global openness." We are all Germans. We don't give you our fear. Your hate is cause for our incentive, he added. The German President spoke against hostility towards Islam and called for peaceful coexistence for shared socio-economic development. Shaykh-ul-Islam Dr. Muhammad Tahir-ul-Qadri, founder and patron-in-chief of Minhajul Quran International and author of world renowned Fatwa against Terrorism, has also denounced the Paris attack. A delegation comprising Mian Imran-ul-Haq (President MQI Berlin), Mr. Mohammad Irshad (President Minhaj Peace and Integration Council Berlin) along with other members of Minhaj-ul-Quran Berlin participated the Candlelight Vigil.