The third annual Daura of Hadith

The third annual Daura of Hadith by Shaykh-ul-Islam Dr Muhammad Tahir-ul-Qadri will be taking place again this year at the Ghamkol Shareef Mosque in Birmingham. This year it is titled Daura Sahih Bukhari and Muslim. In the three day event (23rd - 25th August, 2008), Shaykh-ul-Islam will be focussing on traditions relating to the subjects of Compilation of Hadith, al-Aqaid (Creed), Fiqh and Tasawwuf. Alongside traditions from Sahih Bukhari and Sahih Muslim he will also carry out a comparative study from the other Sihah Sitta- Tirmidhi, Abu Dawud, Nasai and Ibn Maja.

Hundreds of Scholars from all over the UK will be attending with also many attending from across Europe. The event is also open to the public. The previous two Dauras saw Shaykh-ul-Islam present an ocean of knowledge, delving deep into many points of importance. The detailed discussion on many technical points is not possible in normal lectures but in this three day event more time is available to tackle many issues which require such critical analysis.

This year Shaykh-ul-Islam will be concentrating on the compilation of hadith as there are many misconceptions on this matter that are created by those people who reject hadith and only accept the Quran as a source of guidance. This modern day fitnah is gaining strength and Shaykh-ul-Islam will seek to stop it in its tracks.

The three day event will comprise of five sessions. This year like last year there will be a special team to translate the lecture into English, live as it happens, on a large screen. Accommodation and food will be provided. There will of course be separate arrangements for sisters. 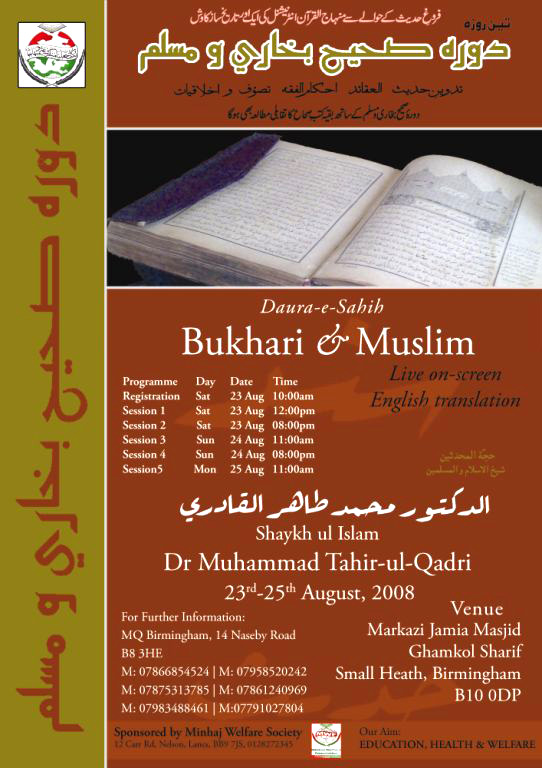