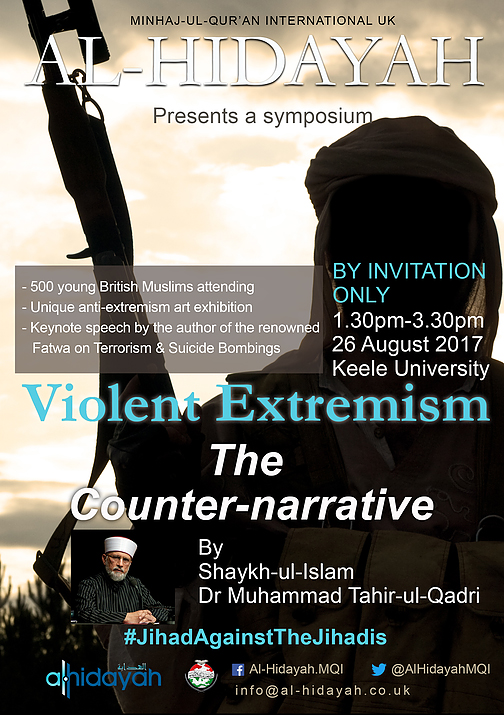 Minhaj-ul-Quran International UK, will host a major "anti-terror" training camp, in order to equip more than 500 young British Muslims with the necessary theological tools, in order to counter the narrative of ISIS and similar groups in their respective communities and online. Shaykh-ul-Islam Dr Muhammad Tahir-ul-Qadri has gone to UK particularly to deliver the lectures.

The 3-day residential camp 'Al-Hidayah 2017' will take place at a time of great uncertainty and in the aftermath of the attacks in Manchester and London earlier this year, and of the recent bloodshed in Barcelona.

According to Press Release issued by central media cell that Shaykh-ul-Islam Dr Muhammad Tahir-ul-Qadri who has authored a 600-page "Fatwa on Terrorism & Suicide Bombings" is the keynote speaker who will train the young Muslims to recognize extremist narratives on jihad in their own communities and equip them the theological and ideological tools to counter them.

Dr Qadri issued his historic fatwa in 2010. It condemns suicide bombings and terrorist acts, along with their perpetrators in unequivocal and unconditional terms. He also launched a comprehensive "counter-terrorism curriculum" in June 2015 that is being taught at numerous mosques across the UK. Academics and politicians alike declared the Fatwa to be the strongest intellectual rebuttal of the ideology of terrorist groups like Al-Qaeda and ISIS because at no time in history has such an extensively researched and evidenced work been presented by such a prominent Islamic authority.

The aim of the camp will be to directly tackle the "theological misconceptions" used to lure young British Muslims to extremism. Dr Qadri will tackle head-on some of the fundamental ideas that form the ideological pathway to extremism.

Speaking ahead of the camp, Dr Tahir-ul-Qadri said: "I have announced an intellectual and spiritual war against extremism and terrorism. It is vital to train young people how ISIS and other groups are giving them the wrong interpretations of Islamic concepts such as jihad."