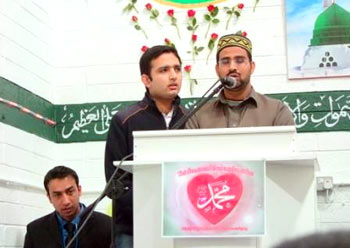 By the Mercy of Almighty Allah, SWT, and the blessings of our beloved Prophet (PBUH), the management and members of MQI Ireland, and the Islamic community of Dublin are pleased to communicate the glad news of a recent Mawlid-un-Nabi (SAW) Conference and Inauguration of MQI Ireland's new Al-Mustafa Islamic Cultural Centre, which was attended on Saturday 24th Rabi al Awal / 21st March 2009 last by a large, diverse cross-section of the various communities of the local and surrounding areas. MQI Ireland has for most of the last 4 years now provided the manifold services and facilities of an Islamic Cultural Centre in the sprawling residential and industrial districts of the general Dublin 15 area. Beginning initially in a private residence and gradually progressing, Alhamdulillah, to better facilities, the new centre of activities has a spacious main prayer hall, sister's area, executive office/ conference area, auxiliary rooms downstairs, as well as sufficient parking. It's address is 9, Westpoint Business Park, Damastown, Dublin 15 and it is easily accessible and secure. Below is given a summary description of the programme of events on the day of the Conference and Inauguration, which were very well-received by all attendees.

Introduction to the Events 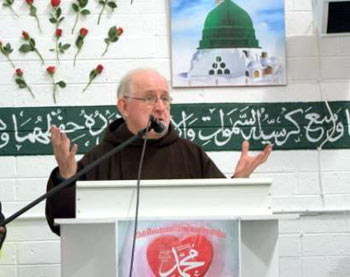 With the fine expansive new location decorated well and a sizeable crowd gathered from many walks of life and traditions, proceedings began after the Dhuhr prayer as the Shuyukh and Guest Speakers took their places and prepared for the proceedings. The grand gathering was first to be addressed by Br Abid Murtaza Qadri; student of al-Mustafa ICC, whose responsibility was to conduct the afternoon's affairs, wherein the Chief Guest was Irish Minister for Finance, Mr Brian Lenihan, and TD.

The illustrious role-call of those who addressed the audience also included Shaykh Hussain Halawa; Imam of the Islamic Cultural Centre of Ireland and Chairman of the Irish Council of Imams, Shaykh Yahya al-Hussain; Imam of the Islamic Foundation of Ireland, Allama Muhammad Adeel Minhajian , Father Don Joe; priest of the Oratory in Blanchardstown, Dr Om Puri; chairman Irish Sikh Council and Shaykh Abu Hassan; Imam of the al-Hussainiya Shia Centre Ireland. It was noted from the start that a wide spectrum of folk could be discerned throughout. 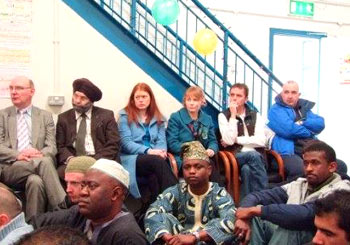 Beginning in the Name of our Creator Almighty Allah, Br Abid Qadri extended his welcome to the assembled and after obtaining silence initiated the intrigue by introducing the uplifting recital of nasheed by Minhaj Naat Council Dublin. After the moving nasheed by these lovers of Rasool-Ullah (PBUH) we were all quite privileged to be acquainted or reacquainted with the reading of

Prominent chartered accountant and President of al-Mustafa ICC Sabir Hafeez was next to welcome us and exchange his best wishes towards all who came and after that came an oration by Dr Om Puri, chairman of the Irish Sikh Council, who thanked Minhaj-ul-Quran Ireland for inviting him and the representatives of the other faiths, saying that it was a very welcome gesture of goodwill and that he was honoured to be there. 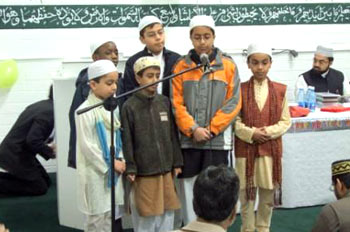 Next to speak to those who came was Shaykh Hussain Halawa who congratulated all on the opening of al-Mustafa ICC and on the birth of noble Rasool-Ullah (PBUH). Shaykh Halawa also said that the Holy Prophet's (PBUH) character and teachings reflected the fact that he was a mercy to the universe in it's entirety. A break was then decided upon in favour of the Asr prayer, during which some slides of MQI's activity in the area throughout the years were shown.

Next to follow were the two principal addresses of the day, by the Minister of Finance Brian Lenihan, respectively.

Minister Brian Lenihan addressed the gathering in a compassionate oration on the shared scholarly traditions evident in both Islamic and Irish histories. He was delighted with the opening of MQI Ireland’s Al-Mustafa Islamic Cultural Centre and congratulated the Muslim community in Dublin 15. He also said he was highly impressed by the service provided to the Irish Muslim community by MQI Ireland.

After these thought-provoking speeches, a cake was cut in honour of Milad-un-Nabi and the attendees ate of it, following which we were treated to a delightful exhibition of Islamic relics on the first floor. These relics were specially brought from the UK by Al-Haj Shaukat Ali. 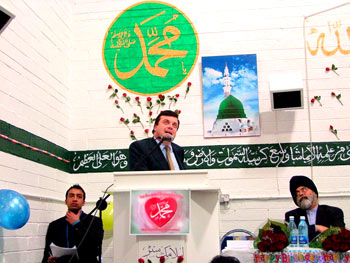 The evening ended with dinner.

To end it can be said that all of the attendees appeared charmed and of good cheer following the programme of the day, and insha Allah many will return to worship and spend a while at al-Mustafa ICC in the months and years ahead. We pray that the Centre and Minhaj-ul-Quran Ireland as a whole can continue to flourish in the best traditions of Islam and promote the teachings of His Excellence Shaykh-ul-Islam Dr. Muhammad Tahir-ul-Qadri, thereby facilitating greater understanding and cooperation between communities and individuals for the betterment of society, Ameen. We also pray that the Shuyukh of MQI and of this country can lead their listeners to righteous thoughts, words and deeds, now and always, Ameen. 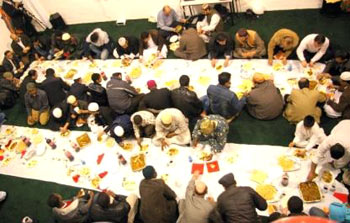