Crowds gather to hear scholar of massive erudition speak: A message of peace and integration 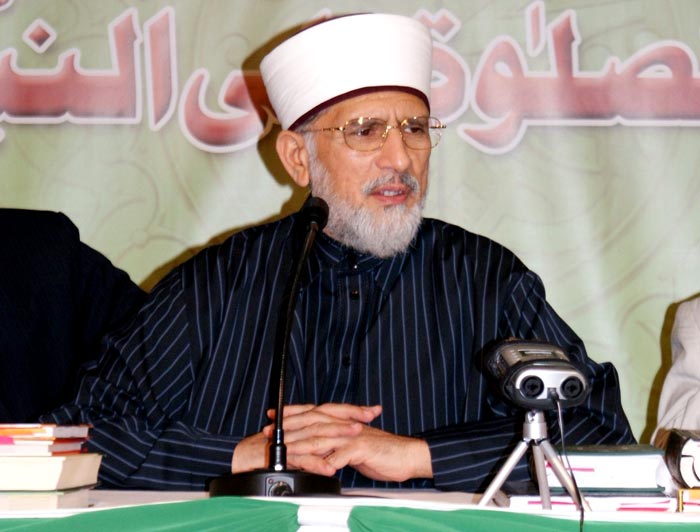 THOUSANDS of people gathered on the evening of Saturday 27th June 2009 at the Minhaj ul Quran International Centre in Forest Gate to hear a scholar of massive erudition speak.

Erudite scholar Dr Muhammad Tahir al-Qadri told listeners gathered that "We are commanded (by religion) to become fountains of peace, security, love, tolerance and generosity. A fountain of spiritual beauty - veil yourselves in the colour of peace so that inwardly and outwardly you only see peace."

Islam regards followers of Judaism and Christianity as People of the Scriptures and advises Muslims to be tolerant towards their beliefs. The following of Abraham or Ibrahim brings the common ground among Jews, Christians and Muslims. Speaking in Arabic Dr Muhammad Tahir al-Qadri said ja Allahu salāma tahiyyatan li ummatinā wa amānan li ahl al-dhimatinā We understand from prophetic tradition - God has made Islam a gift for the prophet's nation and a security for non-Muslims. In a surging voice Dr Qadri said: "When god has sanctioned Islam as security for non Muslim citizens. A Muslim would have no right to raise his hands upon a non-Muslim." 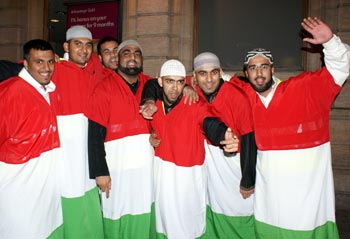 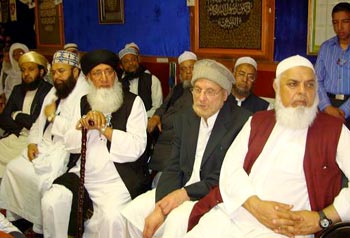 A study of history reveals members of the Jewish and Christian faith lived in peace, security and harmony under Muslim rule in the Middle East up to the shores of Europe in modern day Spain. Jews and Christians oppressed by religious or political elements sought refuge and security under Muslim countries. Similarly Muslims sought refuge with a Christian king of Ethiopia at the time of persecution.

Judaeo-Christian institutions of worship were protected by Muslim administrators such as the St Sergius monastery on the outskirts of Medain destroyed by Mar Amme and restored during Uthman's reign. Similarly a portion of a Muslim institution was destructed in order to accommodate the rebuilding of women's home. The church of Edessa was restored during the reign of the Ruler of the Muslims Muawiyya. Muawiyya employed Christians very largely in his service and other members of the reigning house followed Muawiyya's tradition. Christians frequently held posts at court - a court poet al-Akhtal was a Christian Arab. The father of Saint John of Damascus served as counsellor to the Muslim ruler `Abd al-Malik.

High ranking scholar Dr Muhammad Tahir al-Qadri said salaamun ismun min asma lilllahi ta`ala wa afshu baynakum - Islam is a name from the names of the Almighty. It means peace and spread this amongst each other. Hence the message is how much an individual can do to his ability to spread peace in your society. Dr Qadri said: "Practice peace demonstrate peace in every walk of life" 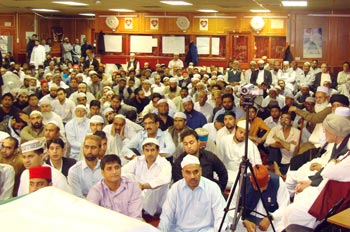 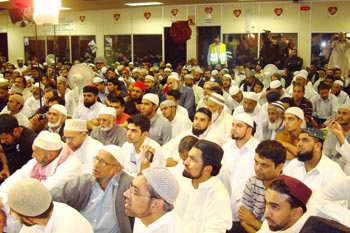 In defining the real meaning of the word Musim Dr Qadri said: "A Muslim is he who provides peace and security to humanity, irrespective of their creed, their religion, their race or their colour." He added: "To spread peace and deal with people via love, politeness, good manners, morals and ethics is the best of acts to enter paradise. This is for every individual whether known to yourself or unknown to convey a message of peace and to spread peace."

Dr Muhammad Tahir al-Qadri praised the achievements and contributions made by Muslim mystics - Sufis in the peaceful spread of Islam. Islam was largely spread by peaceful preaching of Muslim saints such as in Turkey via the Muslim saint Mawlana Jalal al-Din Rumi and Khawaja Muin ud al-Din al-Chishti in the Indo-Pak subcontinent.

Centre chairman Ishtiaq Ahmad said we have worked hard over the course of the last three months to accommodate this event. He said: "I would like to thank everyone including the local police for being here and assisting us with security arrangements to facilitate today's event." 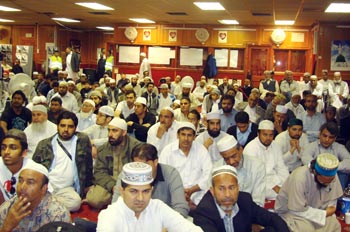 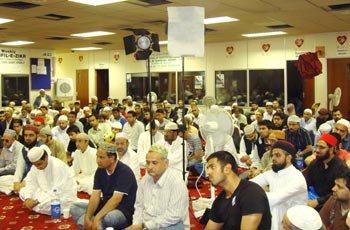 Newham Councillor Dr Zulfiqar Ali said: "My sincerest apologises for not being able to be present at the peace and integration conference held at the Minhaj ul Quran centre. I would like to say that the message from this conference is one we all share and hope that the learned Prof Tahir ul Qadri will continue to promote and convey this message of peace wherever he travels throughout his summer 2009 world tour. I wish him all the success and thank him."

Dr Muhammad Tahir al-Qadri's vehicle remained surrounded with crowds as he departed from the centre. A group of youngsters dressed in coloured robes sang songs of honour in praise of the scholar as his vehicle left. Electronic screens were erected outside the centre to accommodate the crowds. Dr Muhammad Tahir al-Qadri is said to have departed for a tour of Europe countries of his visit include: Scandinavia, Norway and Italy.